While checking into the interrupted re-processing of a collection of Confederate quartermaster and ordnance records at the Mississippi State Archives (where I work), I came across an April 1862 inspection report of the 36th Mississippi Infantry Regiment.  It gives a snapshot of the arms of the regiment as it joined the Confederate Army shortly after the Battle of Shiloh.  But what makes it even more interesting to me is that my great-grandfather, Wesley Washington Pitts, was a private in Company E (Hazlehurst Fencibles) from March 1862 through the end of the siege of Vicksburg (July 4, 1863).  I've tried to keep the capitalization and punctuation of the colonel who wrote the report as well as his spelling (which was actually pretty good).  I've included a short history note at the end extracted from Dunbar Roland's seminal work, Military History of Mississippi, 1803-1898.  I hope that you enjoy this.  My additions and editorial comments are in square brackets, thusly [   ] .

In obedience to Orders No. 83 directing me to inspect the 36th Regiment (Miss.) Colonel Brown commanding and to report in writing, etc. I have the honor to report that I have made said inspection and find said Regiment armed as follows, to wit:  thirty seven (37) Rifled Muskets - Forty one cartridge boxes - Thirty seven Bayonets and Bayonet scabbards- Thirty seven Waist and Shoulder belts - Thirty seven (37) cap pouches - 25 screwdrivers - one (1) Thumbvice - 360 Altered Rifles - Two hundred and seventy Double barrel Shotguns and Rifles.  The altered Rifles I find almost wholly worthless - badly bored out and the locks of the most indifferent kind.  The main spring being entirely too weak to explode our Army Gun caps.  The rifled Muskets are all excellent also the accoutrements belonging thereto.  The doublebarrel Shotguns are some of them, say enough to arm one company, good as they are of the right calibre to carry the B.B. [buck and ball ?] cartridge.  The others are either too small or unfit for service - Some being without tubes [!!] and some without hammers [!!].  Upon the whole, taking into consideration the kind of arms and the way they are distributed; with exception of the 46 cartridge boxes and the 37 waist and shoulder belts I find the Regiment without accoutrements - The Regiment has on hand 18,000 G. D. [?] Percuss. Caps, 15,000 Miss Rifle Cartridges, 1,480 Rifle Musket cartridges, all in good order.  In camp and garrison equipage, The Regiment has an abundance of Tents all of [extra ?] size and a fly to each.  This leaves nothing to be desired so long as they are transported by Railroad but would be cumbersome to transport by waggons - being composed of Osnaburgh [fabric] without the fly they would not keep out the rain.  The men  are comfortably clad and shod.  The Regiment is composed of a fine body of men and properly armed would doubtless do effective service though now laboring under that curse of all new troops the measels [sic].  I would further state that said Regiment is without waggons [?]fore having been transported by rail, and with exception of the want of a few camp kettles leaves nothing to be desired in the way of cooking utensils.

All of which is respectfully submitted

Respectfully submitted with recommendation that if possible Col Brown be permitted to turn in the Arms and Accoutrements now in his Regiment and draw all of one Kind.

HISTORICAL NOTE:  The 36th Mississippi Infantry Regiment was mustered into Confederate service in March 1862.  It was in camp at Meridian, Miss. during the battle of Shiloh (Apr 6-7, 1862).  From the above report, it evidently was moved to Rienzi prior to April 21.  It was part of the what became the Army of Tennessee at the battles in northeast Mississippi (Famington, Iuka, Jacinto, and Corinth) during the spring, summer, and fall of 1862.  In early 1863 it was posted (along with its brigade) to the Vicksburg area and became part of the garrison through the end of the siege, July 4, 1863.  It was reconstituted in January 1864 at the camp of paroled and exchanged prisoners in Enterprise, Alabama.  It rejoined the Army of Tennessee near Resaca in mid May, 1864 and stayed with the Army through the Battle of Franklin and the “Siege” of Nashville before being transferred to help at the siege of Murfreesboro, returning to Nashville just in time for the Union counteroffensive.  After the retreat they were transferred to Mobile and ended the war defending the Spanish Fort and Fort Blakeley where most of them were captured in the Union attacks in early April, 1865.

My great-grandfather was paroled after Vicksburg and was recovering at home in Copiah County.  He either never saw the notice that he had been paroled and was to report to the camp at Enterprise or he ignored it, deciding that he had enough fighting.  Either way his "records" indicate that he was listed as being a deserter from the Enterprise camp.  I can't say that I blame him, especially as he  married in December 1863 [edit].  If he had been with the 36th during the Nashville campaign, I probably wouldn't be here today!

[EDIT, 09/18/2012]  For additional information on the 36th Mississippi during the Vicksburg campaign, please see this article by my co-worker, Jeff Giambrone.
Posted by ColCampbell50 at 2:19 PM 15 comments:

Captain "Red" Green's independent company of provincial infantry has just joined the Britannian army in the 'Murican provinces.  This company was raised from "over the mountain" boys who have much expertise in fighting "Injuns and other critters" in the deep woods.  As such Captain Green has outfitted them with green hunting shirts and deerskin trousers.  The Britannian commander hopes that they will help counter the Gallian woodsmen and Indian allies (link and link).  They will be operating in conjunction with the Britannian rangers.

Clicking on the pictures will result in an easier to see larger image.

The company is composed of one former-London Warroom (now Dayton Painting Consortium) Spanish non-commissioned officer figure as Captain Green and nineteen Old Glory FIW-13 Courier de Bouis [sic] frontiersmen.  These particular figures wear either a cocked hat or a slouch hat.  They are all armed with musket, tomahawk, and knife.  There are seven distinct poses which are shown below:

Now that these have joined the Britannian forces, the Gallian commander will start to raise a counter-force of two 20-figure companies of woodsmen (using the Courier de Bouis [sec] figures in soft caps).
Posted by ColCampbell50 at 10:01 AM 4 comments:

Once all elements had closed on ColCampbell's Barracks, Major General Manly-Barton orders the 5th Foot out on the parade field for some drill.

As the divisions march and countermarch, General Manly-Barton rides around the formations watching with an eagle eye for any faults. 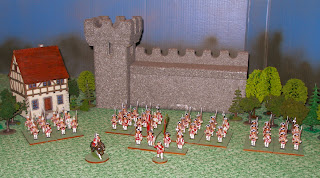 But he can spot none, as the Lieutenant Colonel, commanding, has ensured his company officers and sergeants have prepared the men for these exercises. With his being the first of the Britannian regiments to arrive in Carpania, the Lieutenant Colonel, commanding, wanted to make an excellent impression on General Manly-Barton.  I think that he has!
Posted by ColCampbell50 at 2:43 PM No comments:

In 2010, I painted 444 Olley points of figures, with each point being one figure, horse, or gun, divided into:

215 points of 18th Century figures, including American Indians, militia, Gallian provincials, and ship's crews and guns, plus the Britannian 5th Foot and a few guns and crews.

In addition, I painted four 25mm ships (one row galley and three gunboats) for my Capitania General de Florida games and 100 Russo-Japanese War ships, predreadnought battleships, cruisers, and torpedo boat destroyers, to the tune of 48 Japanese ships and 53 Russian ships, for my two RJW naval games.

Finally, there was a batch of terrain items to prepare for my Sudanese Colonial game at Bayou Wars and for my Capitania General de Florida games here in Jackson.

Pictures of all of the above were posted here, on Col Campbell's Shipyard blog, and on the Jackson Gamers blog.

It was a busy year, but 2011 may be even busier as I turn on the steam for a French & Indian War game for Bayou Wars in June and even more 18th Century imagi-nation figures.
Posted by ColCampbell50 at 8:41 PM No comments:

The color guard of the 5th Britannian Foot has finally joined the regiment, bringing with them newly issued colors. 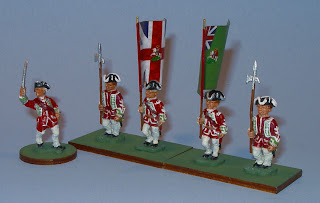 The lieutenant colonel, commanding, gestures as his ensigns with their color sergeants, march forward with the colors.  The flags came from the Kronoskaf Seven Years War Project page of the 5th British Foot.  I resized them and printed them on a color laser printer.  As with the rest of the 5th Foot, the figures are Dixon.
This completes the 5th Foot, unless I'm able at some point in the future to acquire an additional 12-figure division.  Probably tomorrow I'll post some pictures of the entire regiment as it drills at ColCampbell's Barracks.
Posted by ColCampbell50 at 8:27 PM No comments: