Almost all my painting time in June was spent getting ready for the big Zulu game I was running at our regional convention, Bayou Wars (see previous post). Many, many movement trays had to be cut and painted, several hills made, and the "Royal Kraal" (also on previous posts) constructed. So I did not get a single soldier painted.

But I did get a few little trinkets at Bayou Wars. The first being a pre-painted European style house, with a removable roof, that can be used almost for any period from Medieval to Modern. 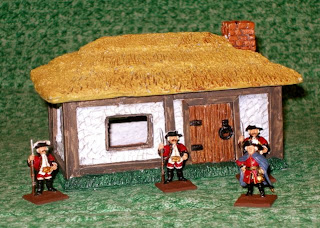 Here you can see a SYW Russian (Courland) artillery officer and three of his artillery fusiliers outside the house. 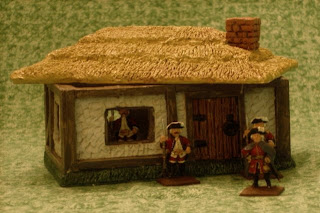 And the same group of figures are posed here, with one of the fusiliers now moved inside. The roof is deliberately askew to show its removability. 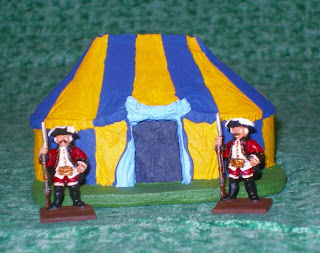 And I also purchased this fine pavillon for a headquarters tent. It was unpainted and I decorated it in the colors of the Markgraf of Carpania, one of my SYW imagi-nations. I don't have any individually mounted Carpanian infantry painted right now so I used a couple of Courlandian artillery fusiliers to show the scale. It is slightly undersized but not so much as to be obvious.

I will get back to full painting mode this month as I've already started on a batch of senior officers, ladies, and other civilians to decorate the rear areas and a company of 15 jagers for the Markgraf of Carpania's army. Most of the civilians are Old Glory (from the Island Governor's set) and the jagers are Old Glory AMR Hessian jagers.

Well, enough of this. Back to the painting desk.
Posted by ColCampbell50 at 8:48 PM 1 comment: