Last Saturday, I participated in a 15mm Seven Years War battle that pitted a French advanced guard trying to force a river crossing in the face of stiff resistance from part of His Britannic Majesty's Army in Germany.  Normally I play on the British side in these battles, but this time I chose the French and was in command of the right wing.  Here is my report to the advanced guard commander.

Note:  A complete battle report will soon be posted on the Jackson Gamers web site and additional pictures can be seen on the Nomadic Old School Gamer's blog.

TO:  His Excellency le Vicomte de Florida, Lieutenant-General de France, commander of the advanced guard
FROM:  Le Marechal-de-Camp François Lucien, Compte de Merlot, commanding right wing of the advanced guard
Monsieur le Vicomte,
In accordance with your instructions, I advanced my column down the right hand road to wards the bridge over the river.  I deployed the Irish brigade along the road, intending to use these elite soldiers to storm the bridge and secure a lodgement.  Of the light brigade, I deployed one battalion to scout for additional crossings over the river, alas without success.  The other three battalions were employed to the right of the road, anticipating finding a crossing.  The 7th Cavalry Brigade followed in reserve to exploit the crossing secured by the Irish Brigade.
The Irish advanced with alacrity and courage, enduring heavy fire from the English guns just across the bridge and from their deployed infantry battalions.
The Regiments Fitz-James and Buckeley suffered severe casualties but screened the dragoons enough that they could get into position to attack the guns.
The Regiment Schomberg, followed closely by the Regiment Colonel-General, rode down the English batteries, sabering the gunners without mercy.
Seeing approaching enemy cavalry, both regiments continued their advance, engaged the English cavalry, and forced them to retire.
But the rest of the Irish Brigade and the Light Brigade were not able to follow-up the gallant exploits of the dragoons.  The English infantry closed off the bridge with additional troops, isolating the two dragoon regiments on the far side.  Both regiments fought stupendously, inflicting many casualties on both the first enemy cavalry brigade and later upon a reserve brigade.  But they were doomed without further support.
I am commending the following regiments for their outstanding efforts in the recent action -- the Irish Regiment Fitz-James and the Dragoon Regiments Colonel-General and Schomberg.  Their heroism must be brought to the attention of the army commander and the King.
It is also my sad duty to bring to your attention the abysmal performance of the Grenadier Battalion de Fischer.  They were quickly scattered by a single volley of English artillery fire and were of no further use in my attack.  I would strongly recommend that the commander be cashiered and the unit be converted to a punishment battalion on the wilds of the Breton coast.
I am, your obedient servant, etc.
François Lucien, Compte de Merlot
Footnote:  We used a modified set of rules originally published in MWAN.  You can find them on the Jackson Gamers web site - called Quick Tricorne.
Posted by ColCampbell50 at 3:56 PM No comments:

Trying to get a head start on the figures I'll need for my Colonial Barracks convention (link) game in early November, I just finished a few 28mm figures that I have had for a while.

First up are three Colonial administrators: 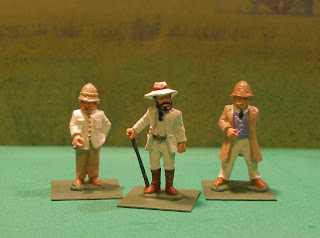 To assist the "helpless" native village against both the Colonial tax collector and the Zanzabari slavers are a group of traveling warriors, out to right wrongs and protect the innocent, all for a small remuneration, of course!

The warrior in the center with the multi-colored shield is an old Ral Partha figure.  He and the Zulu-style warrior on the far right have been painted for a while.  They are joined by the six Foundry native warriors across the rear of the picture.  Armed with spears and other hand weapons, their courage and fortitude will have to strengthen them as they will be facing modern Western rifles.  But  being a "white hat" has never been easy.

I'll be play-testing my modified Lion and Gazelle scenario on October 15.  Between now and then, I still have some African animals to paint and some more jungle vegetation to construct.