The last of my Imperial "troops" have now been completed.  They were two Naval Brigade Gatling guns and crews, three Naval officers, six sailors, and a platoon of regular Egyptian infantry.

The two Gatling guns are each manned with a crew of four gunners (one petty officer and three ratings each) and have a senior petty officer as the "battery commander."  The guns, senior petty officer (blue coat), and two ratings (brown leggings) are Ral Partha figures; the two petty officers in charge of each gun are Miniature Figurines (in yellow straw hats); and the other four ratings were cast by The London Warroom. 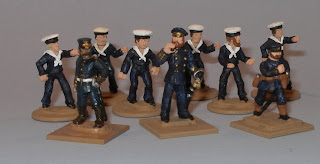 The naval officers and ratings are a mix of manufacturers.  The officer in the center is the Parroom Station "Captain Jack Cole" figure.  The smaller officer on the front right is a Miniature Figurines. I cannot recall the manufacturer of the officer of the front left (unfortunately as he is a nice figure).  All six ratings are old London Warroom castings. 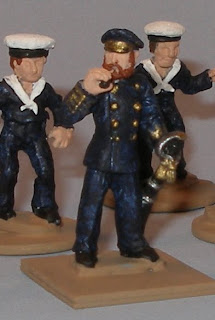 The Parroom Station officer will be my senior Royal Navy commander along the Green Nile.  I've decided to name him Captain Daniel Harrington.  He will be a distant ancestor of Admiral of the Fleet Steadholder and Duchess Honor Harrington. He is a nice figure with a stern gaze and is holding a cigar.

Finally, the Egyptian ground forces received their last troop unit, a platoon of regular infantry in the "older" white uniform.

As usual, my can click on each picture to get a larger image.

With the Imperial forces completed, I can now begin on the native forces.  This will be a larger contingent, consisting of a mounted leader, two 20-figure infantry units, three 12-figure cavalry units, and one 12-figure camel unit.  It will probably take me two months to complete them.  I'll posting pictures as they are finished.
Posted by ColCampbell50 at 9:56 PM 4 comments:

I am beginning preparations for my 3rd Annual George Carr, Sr. Memorial Colonial Game at the HMGS-Gulf South Convention in New Orleans in June.  The scenario will involve a small Egyptian garrison along the Green Nile branch of the Nile River that is under attack by a large group of former Madhists, Beja, and desert Arabs, all led by the Agandar of Karres, a successor of the Khalifa. [NOTE:  Who can guess from where I obtained the name of the Arab commander? I'll give the answer later this month after I have completed the Egyptian infantry and British naval figures upon which I am currently painting.]

The first figure is my overall Egyptian commander, Major Sariati Pasha.  He will be in command of the Egyptian garrison at the old British base at Wadi Zoum-Zoum (see Wadi Zoum-Zoum).  He is named for an actual officer whom I met while stationed in Germany and was engaged in military planning with a non-NATO North African country.  I hope he won't mind me borrowing his name. 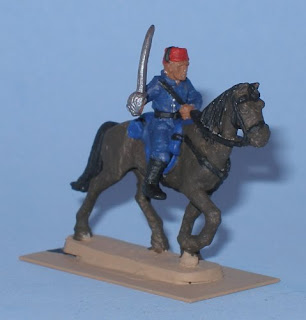 The first unit of the Egyptian mounted column that will be used in the relief of Wadi Zoum-Zoum is a troop of the Egyptian Cavalry Regiment.  These 12 stalwarts are armed with lances, swords, and carbines.

They have also been trained to fight dismounted.

They will be joined by two other mounted units which were painted last year for my Assault on Fort Khalaam game.  This time they will play the roles of a troop of mercenary Baluchi cavalry and a troop of Bashi-Bazouk cavalry.

All of these figures are Ral Partha Victorian Colonials, which are still available from Great Endeavours.

I'm working on a platoon of Egyptian infantry for part of the Wadi Zoum-Zoum garrison and will be posting pictures of them later.

I painted 652 points of figures during 2009, with every foot figure or gun counting as 1 point and every mounted figure counting as two points.  Of those points, 63% were Victorian Colonial in keeping with our group's theme of Colonial Adventuring and 37% were 18th Century.

In addition to all those figures, I designed and built the Victorian era Fort at Khalaam and a number of hills for my big Colonial game at the HMGS Gulf-South convention, Bayou Wars, June 2009.

I also assembled and painted Der Alte Kirche with graveyard walls and graves and the Eisenmuhlen cannon foundry for two "Big Battalion" games this past fall.  In addition to the 8 sections of gabions I painted for the Fort Khalaam game, I painted 12 other wall sections during the year.

Although I didn't accomplish all my goals for 2009, I did make a big dent in the pile of unpainted lead.  Of course I added to that pile and now probably have the same amount in it.  Oh, well, there is always this new year, when I'll be painting more Victorian Colonial, French & Indian War, and 18th Century figures and my Russian and Japanese pre-dreadnought fleets.
Posted by ColCampbell50 at 7:12 PM No comments: