Hunt for the Dingus - A Pulp Alley Game

Today (Saturday, Jan 17), I introduced our gaming group to Dave and Mila Phipps' wonderful "Pulp Alley" rules.  Since I thought we could have a large number of players and this would be the first all except one other player and I have played the rules, I reduced the leagues down to just three characters - leader, sidekick, and ally.  Well, I'm glad I did because I had 8 gamers show for the game.

To start things off, I did a double-blind league designation, putting one playing card with each league's figures and statistics sheet and making the players pick another card that would match one of the leagues.  This generated a thoroughly random (or at least as random as I decided I wanted to do) match of player to league.  I tried to develop the leagues as best as I could, mixing different abilities across the entire spectrum available to me.  I think I got some interesting mixes, but I won't go into any detail about who had what ability, etc.

The objective of the game to find the Dingus which would make the player rich beyond his wildest imagination (well, maybe not Han Solo's).

Once I went through the rules, we started play.  These pictures will give my readers an idea of what went on during the game although I couldn't get a shot of everything that happened.  Having 24 characters controlled by 8 players scattered across the board and having to be game master and arbiter really taxed my ability to take pictures.  But all aside, here we go!


So that was the game.  Cara Loft's Party won by seizing a minor plot point and the major plot point.  Captain Chang's Warlord's Retinue had allied with Cara and received some of the riches (but probably not enough!).  Squire Bergholt, Karlotta, and Oberleutnant Wulfe all seized minor plot points.  Achmed of the Knights of the Crescent Moon, George of the Jungle, and Alan Haggard didn't get anything, unfortunately.  But that will just make them try harder next time!
A few questions arose during the game, but a quick perusal of the rules found the answer to almost all of them.  The answers to one or two questions were decided by the game master's (me) fiat, which I later determined by reading through the Pulp Alley Forum to be correct in every way (as I pat myself on the back!).  We'll definitely be playing this again!
﻿
Posted by ColCampbell50 at 2:58 PM 4 comments:

Beginning Work on the Royal Ecossais

Saturday afternoon and evening I undercoated the first two 12-figure companies of the Gallian Regiment Royal Ecossais.  I used a white undercoat this time instead of my normal gray since I think their blue coats with red facings will stand out better.  I hope to begin actually brushing some paint on them tonight.

Eventually the regiment will total six 12-figure companies (using the large organization in the Batailles d'la Ancien Regime rules by Bill Protz.  I'm using the Old Glory castings so everyone will be wearing a Scottish bonnet.

That is, as many of you know, entirely "wrong," but they are my imagi-nation troops and I'm part Scottish in my ancestry so even the Jacobite Scots exiles wear the bonnet in my armies (He says with a big smile!).

I do have one question - should the musicians be in the French royal livery (as a royal regiment) or in reversed colors as depicted in the Old Glory web site painted example?  Kronoskaf states that information is not available.

More later, with some pictures.
Posted by ColCampbell50 at 1:00 PM 2 comments:

As I prepare for my first Pulp Alley (http://pulpalley.com/) game for our wargaming group, I've organized and painted my first permanent Pulp Alley league.  The rest of the leagues we'll be using in two weeks are just temporary "alliances" of various figures.

Made from some of Bob Murch's excellent Pulp Figures miniatures (http://pulpfigures.com/home/), I introduce "Clan Campbell."  The Clan is a "Company of Heroes" league with a leader figure, two sidekick figures, and one ally figure.  I still have to decide on their individual character abilities.

I still have to decide how I'm going to terrain the bases but for right now, plain green will be fine.  They are all mounted on 8mm Litko bases with flex steel sheet bottoms.

First, I hope everyone had nice Christmas and New Year's celebrations.

For 2015, my gaming will involve both old favorites - Napoleonics, Seven Years War imagi-nations, Very British Civil War, and American War of Independence - as well as a couple of new game systems - Pulp Alley and Lion Rampant.

I'll be running a Napoleonic game at our regional gaming convention, Bayou Wars, in June.  The game will be a what-if rearguard action between Marshall Grouchy's retreating wing of the Grand Armee and  Generalleutnant von Thielmann's III Korps of the Prussian Army after the Battle of Wavre.  I'll have a test of the scenario in May.  I still have some more French infantry to paint for the test and the convention game.

Between now and then, I'll be running a SYW game pitting the forces of the Elector against those of the Emperor and King.  This will be another of the semi-linked campaign between the Electorische Armee Thüringen (Germanians and Britannians) and the Reichsarmee Oberer-Sachsen (Imperialist and Gallians).  I have some Gallian (French) troops to paint, specifically the Royal Ecossais Regiment.  I'll also be running a Very British Civil War game in my ongoing campaigning between the Royalist/BUF forces and the Anglican/Socialist forces along the border between Essex and Suffolk, northeast of London.  I think all the troops I'll need for this are already painted.

Later this month I'll introduce our group to Dave and Mila Phipps' excellent Pulp Alley rules.  We'll pit a menagerie of various Leagues in a hunt for the magical Dingus.  And probably in April, if not sooner, I'll introduce our group to Daniel Mersey's new Lion Rampant medieval rules.  They remind me a lot of the venerable Rules by Ral which our group uses already so I'm hoping for an easy transition to these rules.

And to begin 2015, I introduce a unit of British Loyalists for our American War of Independence armies.  The Royal Highland Emigrants were raised in 1775 from discharged veterans of several French and Indian War Highland regiments as well as new recruits from Highland emigrants to Canada and the American colonies.  There were two battalions raised, with the second being employed primarily in Newfoundland, Nova Scotia, and then the southern American Colonies.  The regiment was taken onto the British establishment as the 84th Foot.  My battalion is the Second Battalion and consists of a mix of Dixon and Old Glory figures that I acquired via eBay.  They originally were to be additional companies for my SYW imagi-nation Campbell's Highland Legion but the figures just didn't fit well with the original figures I used in the Legion.  They are mounted in six 3-figure stands per our standard organization. 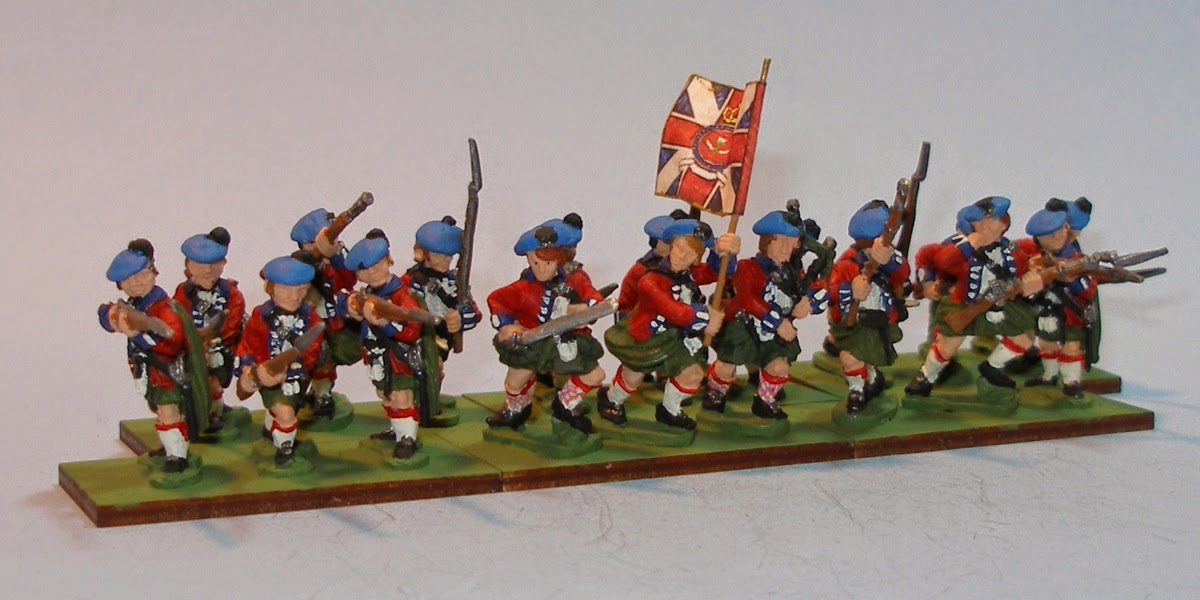 This battalion will get its baptism of fire when our friend Tim C journeys from North Carolina to Mississippi to run a Carnage and Glory computer-driven game on Martin Luther King Day, Jan. 19.  We've never used this computer based rule system but we are looking forward to seeing how it works with our style of play.