I just finished painting and basing an additional Napoleonic Prussian battalion to add to my III Korps troops.  This battalion is the next to last unit needed to complete the 4th Brigade (division equivalent).  They are carrying a "landwehr" flag as there is no indication that they had colors until after 1815.  But all my battalions have flags so I used this one.

This regiment was originally organized by Oberstleutnant (lieutenant colonel) von Reuss in the spring of 1813 as the Auslander Bataillion von Reuss.  But with subsequent recruiting it was expanded into a full three-battalion regiment by July 1813, incorporating Hessian guardsmen, dismounted Westphalian cheveauleger and the Westphalian Legion. In 1815 it was retitled Infantrie-Regiment Nummer 26, Erste Magdeburgisches.  [The Prussian Army: 1808-1815 by David Nash, page 86]

I only have two battalions, the first of Hinchliffe figures and the second of Prinz August castings.  If I ever get any more of either, I'll raise the third battalion.

During the Bayou Wars convention, I bought enough figures to make a British two-squad platoon with mortar and machinegun support and a small German Kampfgruppe of two platoons (one Heer infantry and one Luftwaffe infantry) plus mortar and machinegun support.  The Germans will be augmented by a Feldjager squad using some of Bob Murch's "Between the Wars" German infantry.  I'm adamant that I'll not expand this force level (he says convincingly and hopefully).

Here are some pictures of our first run-through:

A Blast from the Past, Part 2

Here's another "Blast from the Past" picture courtesy of one of the original Jackson Gamers, Tim C. 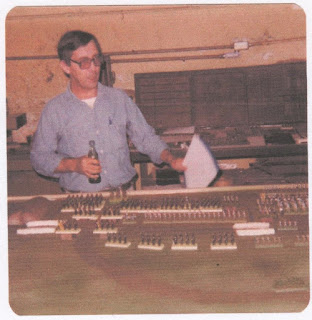 Larry Brom, playing the Duke of Wellington, at a game in Indianola in the summer of 1977.  It was played in the printing press section of the Indianola "Enterprise-Tocsin" newspaper.  The cabinets on the wall behind Larry contain the lead print type that they used to use.  Jay S. gave a description of Larry's part as:


Larry was commanding the allied center - perhaps as the Iron Duke himself.  I remember that the British heavy cavalry let him down.  At the supreme moment when they could have pushed the disorganized French cuirassiers back - and perhaps routed them - both of his heavy reserve cavalry regiments (the Life Guards and "the Blues") failed their morale and would not charge.  Whenever I see photos or video of them trotting along guarding the queen or some other royal person, all that I can think is

" Ha!  You let Larry down at the battle in Indianola."

Lori Brom tells an excellent story about them asking for directions to get to Indianola as they were new arrivals in Mississippi at the time.  Seems they pulled into a country store in Belzoni and asked several teenaged boys in traditional Chinese dress, fully expecting to have to decipher English spoken wit ha heavy Chinese accent.  Instead they got 'good ole Southern twang' from these 4th, 5th, or 6th generation descendants of some of the Chinese laborers who came to help pick cotton, but soon branched out into the grocery and many other businesses.  Ask her to relate that to you when next to see her.

Posted by ColCampbell50 at 3:00 PM No comments: