In anticipation of the visit by F.M. Reichduke Wilhelm von Beerstein (see http://reichduchyofbeerstein.blogspot.com/2009/01/reich-duke-wilhelm-plans-grand-tour.html and http://emperor-elector.blogspot.com/2009/02/reich-duke-wilhelm-departs-on-grand.html ), Major General Campbell, O.T., is arranging a truce between Markgraf Hapnich of Carpania, his employer, and the Dukes of Courland and Sachsen-Wachsenstein.

Major General Campbell. O.T., greets the Dukes and introduces them to the Markgraf prior to beginning the truce discussions.
Posted by ColCampbell50 at 7:23 PM 3 comments:

As the Markgraf and his entourage watch, the first wing of Campbell's Highlander Battalion marches onto the army drill field just outside the walls of Potzdorf. They have been raised as part of Major General Seamus Campbell's contract for service with the Margraviate of Carpania. 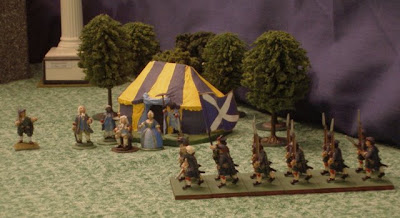 Parading past the royal party outside their marquee.

The Highlanders will be brigaded with the Carpanian converged grenadiers, a battalion of which is drawn up to receive them.

General Baron von Stuppe, the army commander, and Major General Campbell watch as the Highlanders make a complicated maneuver that puts them in front of the Markgraf. 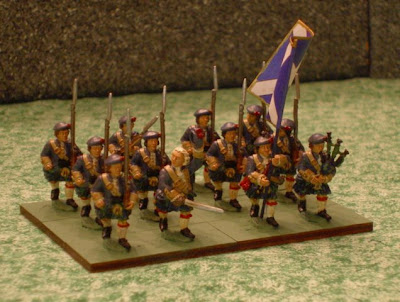 A close-up of the 1st wing of Campbell's Highlander Battalion. They carry the simple St. Andrew's flag and are accompanied wherever they go by the stirring pipes.

The Highlanders are from the Front Rank Jacobite line. The second wing is still being equipped (i.e., being painted).
Posted by ColCampbell50 at 6:39 PM 5 comments:

As I sit here at the computer listening to the pipes and drums and military band of the Royal Scots Dragoon Guards, my pulse quickens. Major General Campbell is pleased with his latest acquisitions.

First, as a result of the sale of Dixon figures by FAA-USA Wargames, I've added enough SYW British to complete a good sized battalion of Britannian infantry to augment the allied forces of the Margraviate of Carpania.

In addition I obtained a 12-figure squadron of Britannian dragoons and an extra mounted officer.

Say what you will about the "pumpkin heads" of some of the Dixon infantry (and these have them), they are still nice castings and will make a welcome addition to my big battalion SYW troops.

Earlier I got a good buy from eBay. Sixteen Hinchliffe Scots Grays. Although these are Napoleonic vintage (wearing the bearskin cap), they will comprise the mounted portion of the Major General's mercenary band, doing double duty as both SYW era imagi-nation troops and Napoleonic era troops.

They came attached to their horses and on ovalish shaped metal bases that had the basic terrain effect done. And they were primed! As you can see there will be some bracing needed for several of the horses who are either balanced on their rear legs or just on two opposing legs. That will be a fun evolution (he writes with a grimace).
Posted by ColCampbell50 at 4:09 PM 5 comments:

Alan from the Duchy of Tradgardland made a comment that it would be nice if we could have miniatures of the medals we have either made ourselves or have been awarded by others. I have been pondering that for a while and finally made a try today. I copied the Ancient and Honorable Order of the Tankard from the Reichduchy of Beerstein blog and then opened my copy in MSPaint. I reduced it down to 5% of the original size, which is pretty darn tiny and then printed it on a laser color printer. Using a magnifying glass, I then cut out the miniature medal and glued it to the chest of my figure for Major General Campbell using regular PVA (Elmer's) white glue. Here is the result: 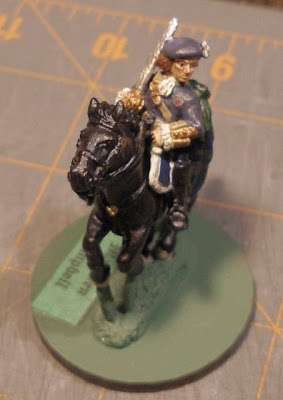 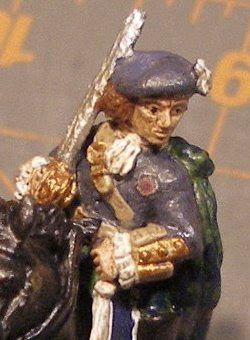 And a close-up of the miniature medal on his chest.
While it is not very discernable, you can still tell that a medal is emblazoned on the figure. I think it turned out very well. I'll cover it with some matte glaze to help keep it attached and to protect it.
Posted by ColCampbell50 at 8:51 PM 8 comments:

In a previous post, I described getting Wargame Tactics by Charles Grant as a late Christmas present (thanks to an Amazon gift certificate). So I decided to determine what books I had in my personal library that might qualify as "Old School" wargames books. I've come up with at least these six. 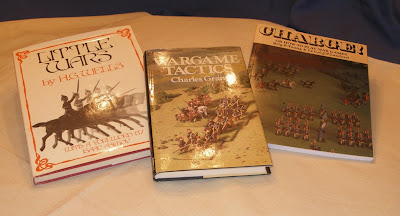 The first three are:

Little Wars by H. G. Wells (the 1970 Arms and Armour Press reprint with a forward by one of the deans of science fiction, Isaac Asimov) 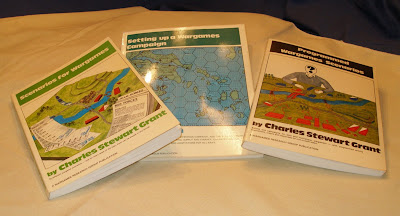 The next three are:

I'm sure I have a few others, but these are some of what I consider basic "Old School" wargaming publications.
Posted by ColCampbell50 at 2:22 PM 4 comments: