My August additions have been a little varied -- 15mm Confederate infantry and 25mm Medieval cavalry!

First the Confederates.  I purchased a nice little collection of painted 15mm Confederate infantry a short while ago and organized some of them into another brigade for my somewhat made-up Tullahoma Campaign forces.  To these already painted figures I added a mounted officer - Brigadier General Stephen Dill Lee.  Lee, as many of you may know, started out as an artillery officer, eventually commanding some of the artillery at Vicksburg.  But during the beginnings of the campaign that would eventually see it fall, he was given command of an Alabama brigade.

I've replicated it for "On to Richmond" rules with a strength of approximately 1200 men.  All I had to do was repaint several of the figures trousers and some of the blanket rolls.

Although in reality this brigade was besieged in Vicksburg and captured when the city surrendered, in my made-up Tullahoma campaign, it was sent from Mississippi to reinforce the Army of Tennessee.  As an independent brigade, Lee's can be attached to any of the Confederate divisions.

As part of "On to Richmond" brigades suffer casualties two ways - outright kills and disruptions.  Of course outright kills result in the removal of stands, but disruptions incur various combat and fire penalties.  The rules recommend some type of marker to indicate the up to three disruptions a brigade can suffer.  I decided to use a hexagon base with a casualty figure and one, tow, and three dots on the sides to indicate the degree of disruption.  This picture shows Lee's Brigade with two disruptions.


And finally, I came across some vintage Ral Partha "true" 25mm mounted sergeants that I bought a couple of years ago.  As they were already painted to a nice standard, all I had to do was touch them up and glue them to their 40mm x 20mm metal bases.  This unit of 6 mounted sergeants can now be used for three different rule sets - the venerable "Rules by Ral," the derivative and expanded "Lion Rampant," and the relatively new "To the Strongest!"  Can't get much better usage than that, can you? 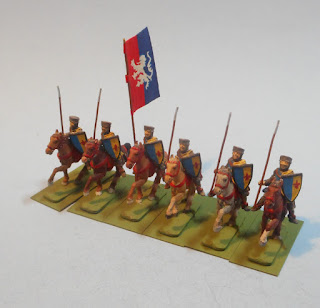 I haven't come up with a name for these rascals yet, but they do look very martial.

Posted by ColCampbell50 at 9:48 PM No comments:

Today I welcomed Brigadier General John Turchin's 3rd brigade of Major General Joseph Reynolds' 4th Division, Major General George Thomas' XIV Corps, Army of the Cumberland to Col Campbell's Barracks to join my very slowly expanding Union forces.  John Turchin was a Russian émigré from the Don District of the Ukraine who had been a Russian officer.  More information about him can be found here.

Turchin's Brigade, at the start of the 1863 Tullahoma Campaign, in which I place my forces, consisted of the 18th Kentucky and 11th, 36th, and 92nd Ohio Infantry Regiments.

These 15mm figures, except for the mounted officer, are Old Glory 15s, while the mounted officer is a Battle Honors figure.  The figures are mounted for the "On to Richmond" rules in which the basic maneuver unit is an infantry or cavalry brigade of 3 to 10 stands, each stand representing approximately 300 actual soldiers.