I just scored two lots of Barry Minot 30mm tricorne era figures from my friend Robin, "fokibo" on eBay. I have purchased other figures in the past from Robin as well as helped in some figure identification.

The lots consist of 25 infantry figures and 10 casualty figures. With some command figures, the infantry will eventually form a 30 figure battalion, probably with the Barony of Eisenmuhlen, an ally of Carpania.

I'm presuming that since Barry was a sculptor of Spenser Smith figures that these will be more Old Schoolish than more modern figures. Now I'm wondering, besides Spenser Smith figures, what other lines might have compatible command figures - maybe RSMs since they will be easier to get this side of the pond? If anyone has any comments on this, please speak up. 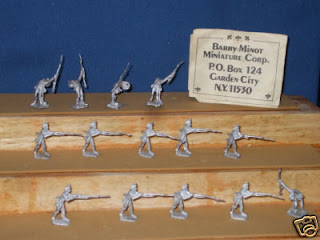 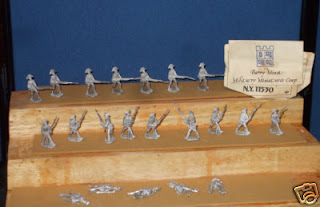 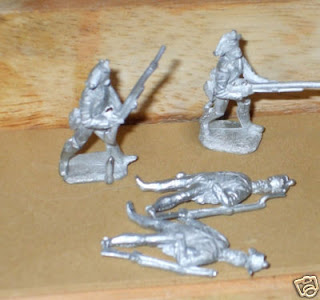 A close-up of the Lot # 2 figures
Note: All pictures courtesy of Robin's eBay postings. I'll be taking some of my own when they arrive, hopefully by the end of next week!
Posted by ColCampbell50 at 7:35 PM 2 comments:

We have just been informed by the Private Secretary of F.M. Reichduke Wilhelm von Beerstein that the Reichduke and his entourage will be visiting the Margraviate of Carpania and the Duchies of Courland and Sachsen-Wachsenstein after completely their tour of the Principality of Morea.

We understand that the Reichduke may be accompanied by young Basil of Morea, King of the Romans. Appropriate festivities will require planning - food and beverages to gather, entertainers to rehearse, military reviews to organize. The three statelets will be aflutter with activity over the coming days and weeks!

Several days ago, Snickering Corpses, the owner of the Principality of Hesse-Engelburg blog posted some pictures of older 30mm figures that he had acquired to see if anyone could help him identify them. To my surprise, one of them was almost an exact match to an old Scruby 30mm Bavarian Napoleonic figure I had - except mine has a plume on the side of the casque and his didn't. (http://hesse-engelburg.blogspot.com/2009/03/figure-identification-further-photos.html)

Back in the early 1970s I got a sample of Jack's 30mm Napoleonic figures that include a mounted Napoleon, a Chasseur a Cheval of the Guard, and six infantrymen. I painted the six infantry but have never gotten around to the two mounted figures. The infantry grace my cubicle at work and I decided to show them off here.

They are mounted on circular 40mm Litko bases which have had terrain effects added. 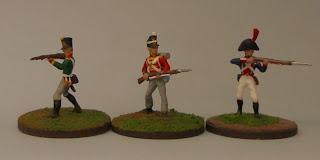 Here are the three Coalition figures -- an unidentified light (?) infantryman that I painted in a green jacket and gray pants, a stalwart British center company infantryman, and an early Prussian (I think) musketeer. 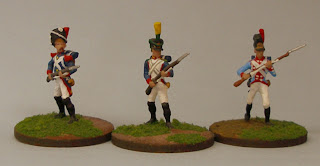 And the French and allies -- a French grenadier in bearskin, a French line leger, and a Bavarian grenadier (this is the match to SC's figures).
I had to touch these up before I mounted them as their paint had become chipped over the years. Additionally the British figure had snapped off at the ankles and needed drilling and pinning in both legs. That was a chore, but turned out fine.
Posted by ColCampbell50 at 1:16 PM 3 comments:

After many weeks of procrastination, I finally finished the last unit of my small Victorian Colonial Dervish force - a unit of 12 mounted spearmen. Shown below with the unit leader (holding flag) and a senior mounted leader, they are venerable 25mm Ral Partha figures. As always, please click on the picture for a larger view. 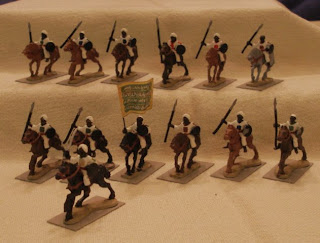 My Dervish force now consists of three 20-figure infantry units, this 12-figure cavalry unit, two 4-figure gun crews (using whatever guns may be available), and two senior leaders (one mounted and one foot ), plus a prophet. Coupled with my small Beja force of two 20-figure infantry units and one 12-figure camelry unit, this will make a handy army to wreck havoc in the Soudan against the British and their Egyptian lackeys.

Of course I still have to finish with the Egyptians. And then there are the rest of the Bedouin/Berber style Arabs, and the Pathans, and more British, and an Indian lancer unit left to go. So I'm not finished with the Victorian Colonial "lead mountain" yet!
Posted by ColCampbell50 at 1:15 PM 2 comments: