Here is the final report of my participation in the First Annual Colonial Barracks All-The Sword and the Flame Convention, held back on Nov. 4-7 in New Orleans, Louisiana.  This final group of pictures covers the game I ran on Saturday morning -- The Lion and the Gazelle -- using The Sword in Africa variant of TSATF rules.

And now, without further ado, let us join the trek into Darkest Africa where British led askaris battle rogue bull elephants; white hunters are out for just about any kind of trophy; and Zanzabari slavers try to raid a peaceful village that is protected by the Great Mamubaba, a "witchy" woman.

The game quickly drew to a close, with the native warriors repulsing the Zanzabari slave raiders, the British tax collector entering a virtually abandoned village, and the great white hunters scoring some impressive kills and winning the game.
Before the game began, Lori Brom informed me that my game was one of the ones chosen to award a "BC" (Brom Colonial) medal to the player who exemplified the true Victorian gentleman.  All of the players enjoyed themselves during the game and all were courteous and very gentlemanly in both adversity and plenty.  In true wargamer fashion, we decided that a roll of the die would award the medal.  Jay Stribling, a previous winner, graciously withdrew from consideration.  I rolled a D6 and the recipient was:
EDIT:  For additional pictures, please see this posting on the Nomadic Old School Gamer's blog. (edit posted on 12/18/2011)


And that was how I viewed Colonial Barracks.  I hope that you kind readers have enjoyed the brief peeks at the games and will seriously consider joining us next year on the first weekend of November as the Second Annual Colonial Barracks takes place.
Posted by ColCampbell50 at 7:42 PM 5 comments:

In this part of the report, I will display the pictures I took at the final two games in which I played.  The last part of the convention report (Part 4) will be of my game, The Lion and the Gazelle.  I will get it posted during the Thanksgiving weekend.

Pirates in the Main was run by Steve Wirth on Friday evening.  Steve used The Sword in the Caribbean variant of The Sword and the Flame rules in this game.

Pirates capture a town and Spanish troops have been sent to ransom or rescue the Governor.  But has this island been cleared of hostile natives?

In Nicaragua: 1926 was run by Ken Hafer on Saturday afternoon.  Ken used the With Ol' Gimlet Eye variant of The Sword and the Flame rules in this game.

U.S. Marines and Sandinistas decide they must deny this important piece of real estate to one another.
We were using hidden movement on maps provided by the game master.  Unfortunately the green Marine lieutenant (Col Campbell, himself) had his map oriented upside down and didn't realize it until the game was half over.  My fellow gamers razzed me about this for the rest of the game.  I can only protest that there was no "north" arrow so I didn't know which end was up (he says with chagrin).
So out of four games in which I played, my record was one win (the French at Matehuala) and three losses (Arab cavalry in the Sudan, Pirates in the Caribbean, and Marines in Nicaragua) -- about par for me, alas.
Posted by ColCampbell50 at 8:20 PM No comments:

For this Veteran's Day Sunday at our church, my wife and I took care of the flowers in the sanctuary "in memory and honor of our church's veterans." 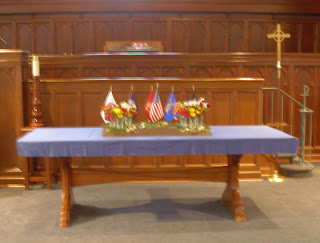 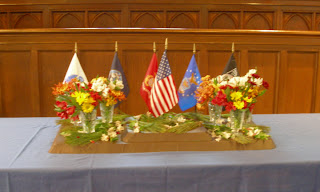 The flags across the back are the colors of the U.S. Army (my service), the U.S. Navy, the U.S. marine Corps, and the U.S. Air Force and the POW/MIA flag.  The flowers came from our local Kroger Grocery store's flower shop and the pine boughs from my backyard pine tree.
Posted by ColCampbell50 at 2:58 PM 1 comment:

As I stated in my last post, I played in four games and ran one during the Colonial Barracks convention last weekend.  This report covers two of the games in which I played.

Midnight in the Oasis was run by Nick Zizo on Friday afternoon.

The Egyptians had a camel mounted unit, two infantry units, and a gun.  The British had four infantry units, one cavalry unit, and a gun.  The Dervishes had ten infantry units and five cavalry units.  As one of the Dervish commanders I had three cavalry units.  Along with the other cavalry commander, we were to delay the British advance until our infantry could assault the Egyptians in the oasis and destroy them.  Then we would all gang up on the British.  But unfortunately Nick failed to tell the Egyptians that they had to hold the oasis.  So on the first turn, they abandoned the oasis and marched towards the British column.  All our infantry could do was try to chase them down - unsuccessfully for the most part.  Our cavalry was shot to pieces as we tried to delay the British.  The two allies joined forces and the Dervishes beat a hasty retreat.


Needless to say, the Dervishes abandoned the field after the British and Egyptians linked up.  And uncommon in a Sword and the Flame game, there was not a single melee.  The combatants either failed to close, failed to stand, of successfully evaded the charge!
Battle of Matehuala was run by Mark Stevens on Sunday morning.
Mexican Republican (Juaristas) forces attempt to drive the hated Imperial forces out of the town of Matehuala before French reinforcements can arrive.  Can they succeed?
Three Imperial Mexican units (one was actually the Belgian battalion) and a gun are in hasty defensive positions on a hill some distance from the town.  The Juaristas are attacking with seven (I think) infantry units, one light cavalry unit, and one gun.  French reinforcements are hurredly marching "to the sound of the guns."  I was chosen to be in overall command of the French reinforcements.
But this, unfortunately, ended the battle as we had to vacant the ballroom in which the convention was held.  The Juaristas had accumulated more points that the Imperials but they had not even threatened the town's defenders - two units of French Foreign Legion and a regular French gun.  It would have been a hard nut for the Juaristas to crack.
More pictures of the other games in which I played and of the one I ran are still to come.
Posted by ColCampbell50 at 8:12 PM 4 comments:

This past weekend, November 4, 5, and 6, close to one hundred The Sword and the Flame fanatics gathered in Metarie, Louisiana for the first TSATF gaming convention run by the Brom family - Larry, Lori, and Christy.  The following pictures portray over half of the games that were played.  All pictures are by Col Campbell himself unless otherwise indicated.  Also unless otherwise indicated, all games were played with 25/28mm size figures and with the 20th Anniversary edition of The Sword and the Flame rules.

Jay, Tim, and I are charter members of the "Jackson Gamers."  We were joined by Mark at a later date.  Jay and Mark were the heroic play testers as Larry developed The Sword and the Flame.
Lori and Christy are seated behind the table.  Arrayed around them are Ed Sansing, Jay Stribling (smiling), Bill Hamilton and Mark and Martha (in "scooter" behind Mark) Stevens.
A Great Queen Is Hard to Find -- was run by Lori Brom on Friday afternoon using The Sword in Africa rules.

Africa, 1895:  A European archaeological party is surveying ground for a dig to find the lost mines of Queen Esme.  They are threatened by unfriendly tribes led by the Great Mamou, a queen who wants her ancestor's treasure left undisturbed.  Wil the archaeologists make it back to the British Museum or will the lost mines stay hidden?
The Prisoner -- was run by Tom Anderson on Friday evening.

Friendly Soudanese tribesmen have notified the Anglo-Egyptian headquarters that a gathering of Dervishes encamped some miles distant appear to have a white captive with them.  It is suspected that the prisoner might be Lieutenant Hamilton who was reported missing last week from a surveying party.  High command has stated that Lt. Hamilton will be rescued at all costs - dead or alive!  If not, the mission has failed.
Find the Gun -- was run by Jay Stribling on Friday evening. This game was played with 15mm figures but used the 25mm movement and gunfire range distances.

The British players search for a Boer gun that has been annoying traffic on a vital rail line.  Do they find it?
The Train -- was run by Mark Stevens on Saturday morning.

A train carrying ammunition to a British outpost has derailed.  A platoon of Post Office Rifles and a Gatling Gun must defend the valuable supplies until a relief column arrives.  This is a scenario from the "Scenario Portfolio 2000" published by Larry Brom.
The scattered ammunition and supply boxes are paper constructs.
March and/or Die! -- was run by "Old School Gamer" Paul Arceneaux on Saturday morning using 54mm figures some of which are older than many of the gamers present.

The French Foreign Legion takes on various desert tribes.
The Battle of Maiwand: 1880 -- was run Saturday morning and afternoon by Ethan Reiff using a modified 800 Fighting Englishmen.  Ethan drove (!!) all the way  from Los Angeles with the game boards, troops, and buildings loaded in his wife's car.  [Ethan -- she is a definite keeper, letting you borrow her nice car to come half way across the continent to play with little toy soldiers.]  Ethan's game was the highlight of the convention.  Please visit Ethan's blog -- Maiwand Day -- to read more about his reconstruction of the game and the terrain.
Save the Ladies!: Indian Mutiny, 1857 -- was run by Marc Fluitt and Mark Stevens on Friday afternoon using the Sword in India rules.

Ladies Martha and Carolyn are protected from the mutineers by a loyal Indian merchant in his city compound.  This infuriates the mutineers and they rush to assault the compound to take the ladies hostage before the compound can be evacuated by a relief column.  Can the ladies be saved?
The Wind and the Lion -- was run by Nick Zizo and Jeff Baumal on Saturday night.

The Berber Chieftain El Rasuli is angered that the Sultan is entertaining foreign governments and weakening to their manipulations.  In an attempt to embarrass the Sultan, El Raisuli has kidnapped the expatriate Mrs. Eden Pedecaris and her two children and taken them to his stronghold in the Riff Mountains.  He then traveled to this small village southwest of Rabat to effect the exchange of his prisoners for gold and rifles.  But is has been captured by the German infidels and their lackey dogs.  El Raisuli must be freed .... it will please Allah!
I was planning on playing in this game, but a late supper with my wife (who came with me to the convention) coupled with some shopping time with her got me back too late to join in the game.  But I did watch for a short time and also took part in "the Cabal" discussions (see picture at start of post).  By this time I was almost played out, having run a game Saturday morning and played in three others, two on Friday and one Saturday afternoon (with a record of 0 wins and 3 losses - how "perfect" can you get!).
These were just the games in which I didn't play or run.  Those five will be posted later.  Please visit Flashcove's Cay and the Nomadic Old School Gamer blogs for additional pictures.
Posted by ColCampbell50 at 8:41 PM 1 comment: