With January about over, here's what I've been dabbling with over the past two months or more.

First, I finally completed a 28mm supply wagon using a 4Ground wagon kit, a Foundry driver, and a Fife and Drum draft horse.  It only took me 2+ years to complete the wagon! 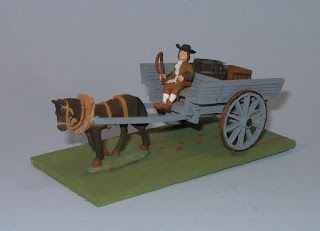 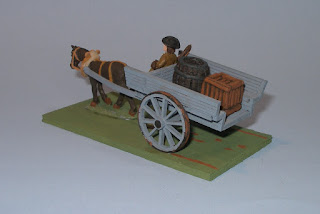 This will provide supplies to my 28mm Imagi-nation SYW era forces.  I have another wagon kit to put together as well as finish the draft horse and rider.  Hopefully it won't be another 2 years to get that one done.

Although not painted recently, I've been examining my 15mm medieval armies (based on ca 1100 in southern Italy) to use with BigRedBat's "To the Strongest" rules (see previous post).  Here are a mounted command group and two Norman mounted milites units:

And finally, I am making a foray into the American Civil War, using Old Glory 15s and "On to Richmond" rules.  OTR uses brigades as the basic maneuver unit with each composed of three to ten stands.  Each stand represents about 300 men.  My Marine comrade Larry Reeves gave me an extra group of painted Union infantry to which I've added a mounted officer and based on 2" x 1" Litko bases.  They will be called "Reeves' Independent Infantry Brigade" and will form a reinforcement to the XIV Army Corps (commanded by General George Thomas) of the Army of the Cumberland, ca. 1863.  I'm currently painting my first brigade of their Confederate opponents from Hardee's Corps of the Army of Tennessee.  We'll see how quickly I can get units painted so my battles won't be too far away.

It Is Good to Be Back

After an almost three month absence, I'm finally back to make a few posts.  Things around Col Campbell's Barracks have been at a low wintery slump since preparations were completed for my participation in the Colonial Barracks convention back in early November.  Since then I haven't done much in the way of hobby activities.  But here's where I'm headed.

My wargaming buddy, Lord Sterling, ordered this set of rules from BigRedBat.  Back in December we played several games using this interesting set of ancient/medieval rules.  All of the activation, weapons fire, and combat is controlled by playing cards drawn from a shuffled deck.  The card driven activation mechanism sure makes you think about what you want to accomplish and how to sequence events to make that happen.  Here are some pictures at various times in the game between two fairly well balanced Roman/Greek/Gallic forces - basically a "civil war" scenario of Romans with Greek and Gallic allies on both sides.

The game uses squares to control movement, weapons ranges, and combat during the game.  Most infantry can move one or two squares straight forward or diagonally.

After the games were over, I was sure that I had found a way to use my ca 1100 AD 15mm medieval figures that I had remounted from DBx standards to Vis Belllica standards - 80mm x 40mm bases with varying numbers of figures on each base.  Since they were mounted on Litko bases, I didn't want to go through the machinations of unbasing them to go back to DBx standards.

So now to figure out which size squares to use.  The rules suggest using a size that can accommodate two regular size uits per square with room left for a mounted commander.  Since I have 80mm x 40mm bases that meant the smallest square size would be 4" x 4" (ca 100mm square).  So I drew out two squares and tested some bases on them:

I really didn't like the tightness of the 4" squares, especially when it makes it difficult to fit mounted commanders into the squares without them partially sitting on top of the unit bases.


Now all I have to do is mark up some old battlefield cloths to distinguish the corners of the 5" squares and my 15mm Normanno-Italian, Papal Italian, and Byzantine armies can contest once again for southern Italy.