In a thread on the Very British Civil War Forum, "Taking a Swing at Lead Mountain," the original poster suggested a communal effort to make a concerted effort to get some of our laggard VBCW projects completed.  I posted that I had a number of figures just undercoated that needed to be completed before my game on May 17.  So it looks like we have a target!

Here is the first picture of the progress: 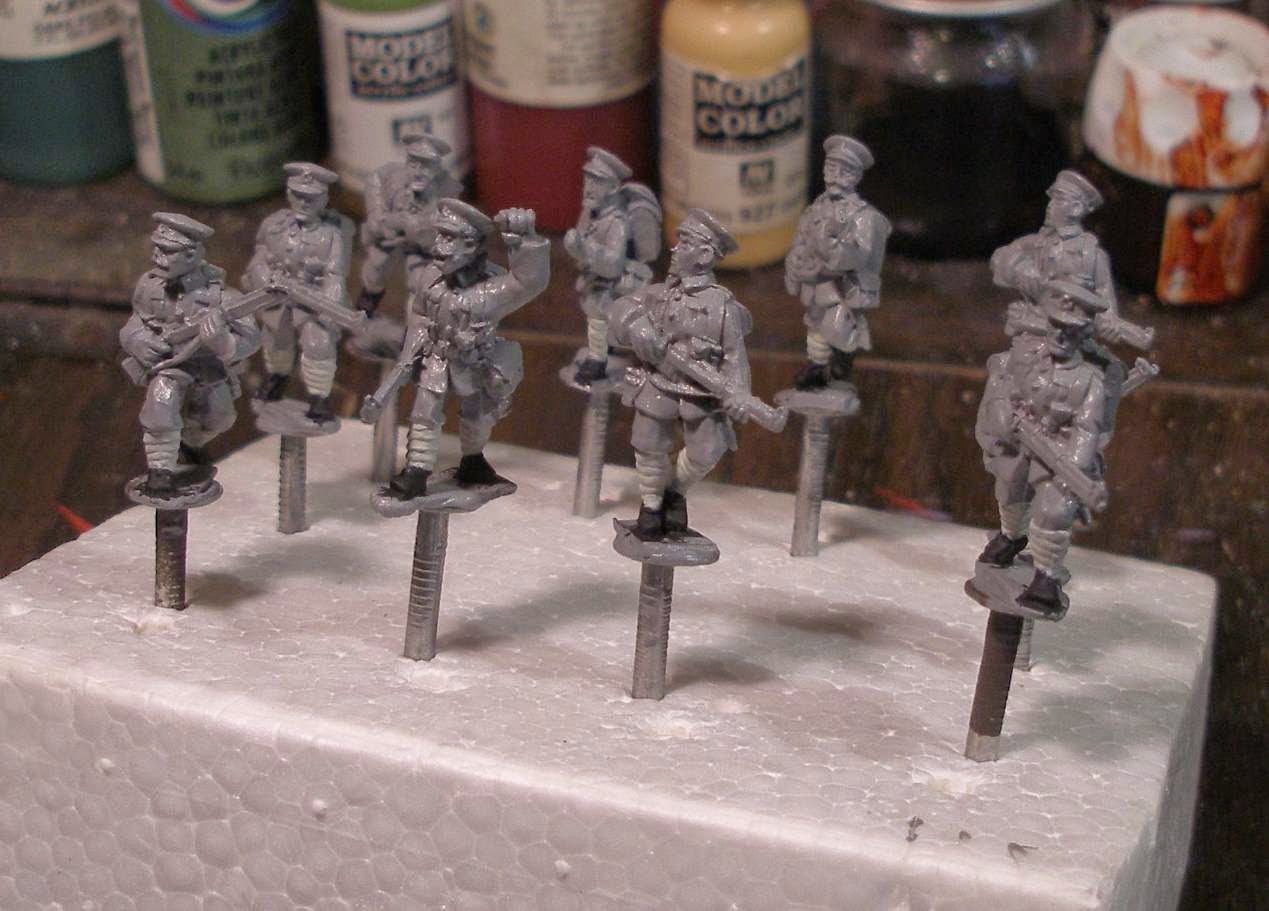 These are Battle Honours figures from Old Glory 15s/19th Century Miniatures ( link ) here in the US.  Some of the figures sculpting is a little crude but they look very nice when painted, plus the price and shipping was very reasonable.  They are glued to roofing nails that have large flat heads and held in a block of Styrofoam.  The nails give me a good purchase and I can angle them just about anyway I need to paint the various bits.

I've added some more troops to upgrade my Revolutionary Naval force and my British Union of Fascist force. 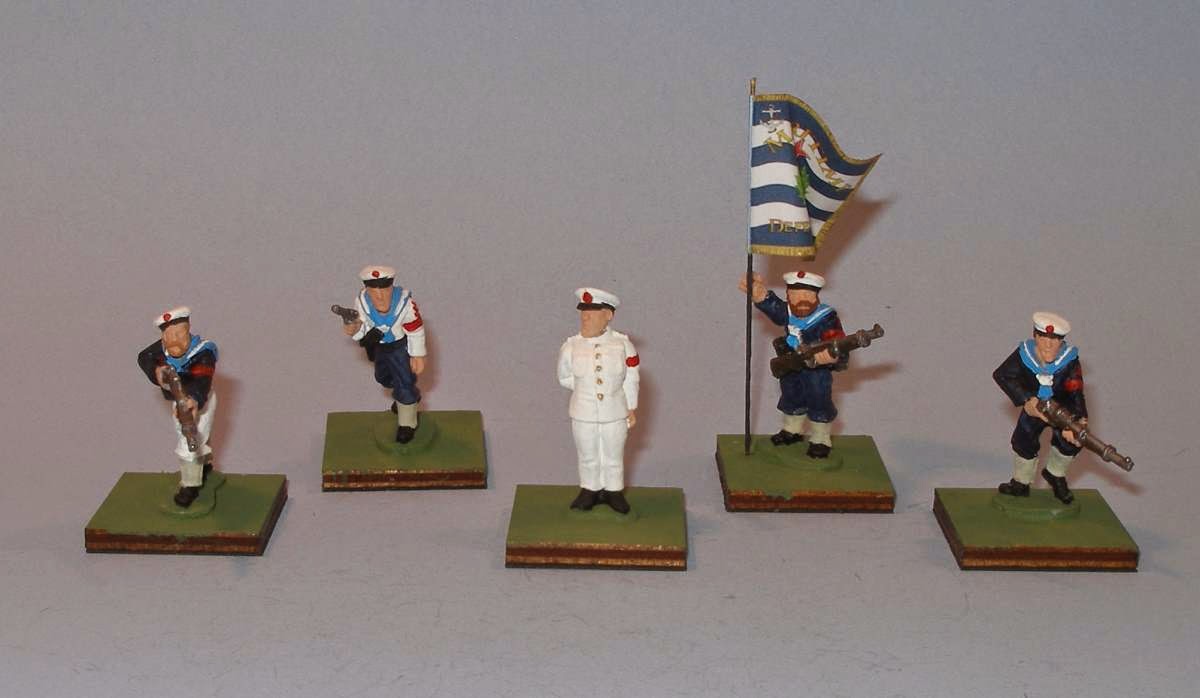 The Revolutionary Naval company has augmented its headquarters element with three additional figures - a Leftenant resplendent in his whites (but with a red armband to show his "true" colors) and two seamen (front left and right).  The senior petty officer (back left) who was in command as been relegated to 2ic while the petty officer (right rear) now carries a banner suitably engrossed "Maritime Defence Force."  The figures are a mix of Pulp Figures (leftenant, from pack PBT 16) and Brigade Games (packs BG-WIAG 15, 16, and 17).  The banner is courtesy of Leics-Gamer from the VBCW Forum [link].  I also added two more riflemen to each of the rifle sections in the company. 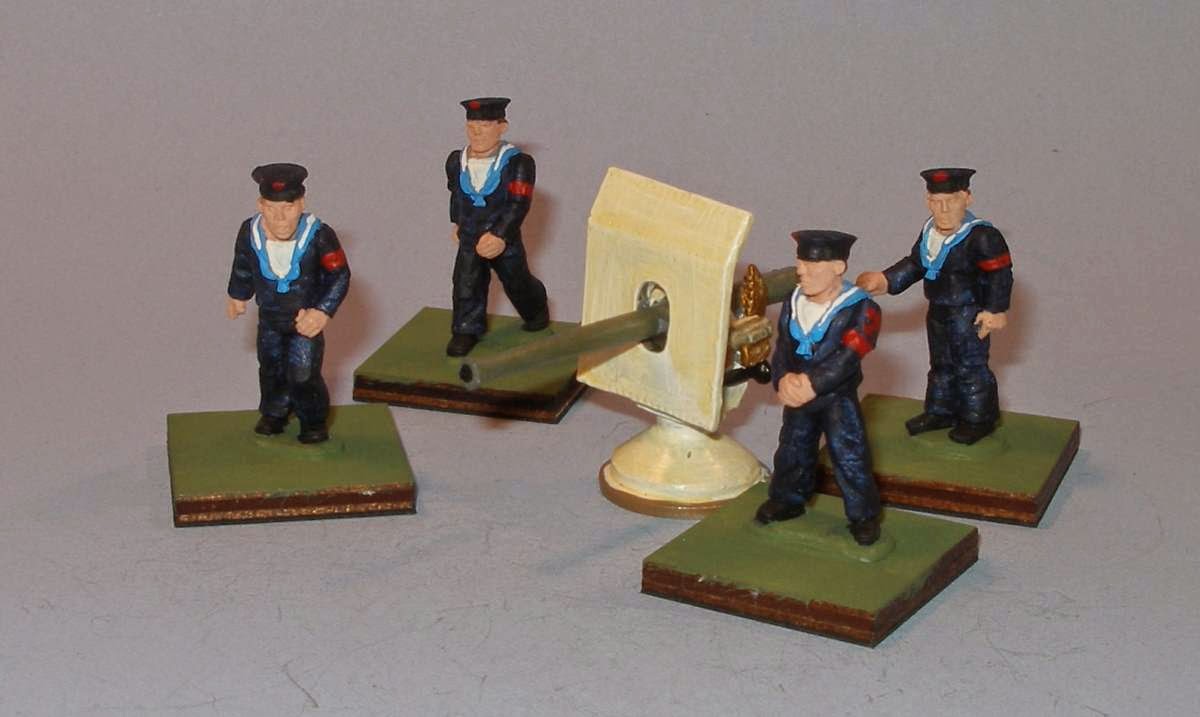 Although they are not really in "gunner" poses, they'll do until I can find something better.  The gun is one that I have had for a very long time (as you can see from the "yellowing" of the white enamel paint).

The Revolutionary Naval company is now up to strength of 35 figures (5 in HQ and 10 in each rifle section) plus a 4-man gun team.

Now called  the Bolton Rifles (banner and name courtesy of Leics-Gamer again), the expanded headquarters element has a captain (center), leftenant (far left), sergeant (right center), banner bearer (left center, obviously), and a rifle grenadier (far right).  These figures and the ones in the Third Section (below) are from Pulp Figures (packs PGS 15 and 16).

The Third Rifle Section has a sergeant (center with raised hand), eight riflemen, and one rifle grenadier (kneeling figure next to sergeant).

This completes the BUF Bolton Rifles to a company of 35 figures (5 in HQ and 10 in each rifle section) plus a 3-man heavy machine-gun team.

Now I've almost completed all the units that I have on-hand.  I still have to complete painting a new figure for the Squire of East Bergholt (a special Pulp Figures model), a section of mercenaries who will, initially, fight on the Anglican/Albertian side, and two Daimler armored cars for the Royalist armored force.