Finally, after many fits and starts, I've completed another Confederate brigade for my 15mm ACW forces which are based on portions of the Union Army of the Cumberland and Confederate Army of Tennessee during the spring and summer of 1863.

My 15mm ACW forces are organized for the "On to Richmond" rules where the basic maneuver unit is the brigade.  Each stand depicts about 300 infantry.  With Deshler's Brigade being about 1800 strong, there are six stands in it.  The reinforced line is one of the formations allowed in the OTR rules. 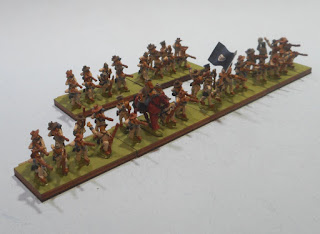 Here's another view showing the "Cleburne" style flag carried by the regiments of the brigade.  Even though there are three combined regiments in this brigade, I only use one flag.  The miniatures, with two exceptions, are 15mm Old Glory figures.  The two exceptions are the mounted and foot officers. 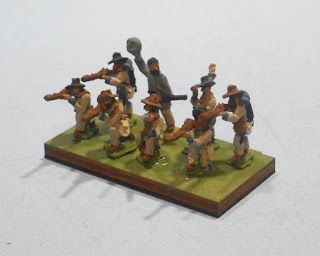 Here's a close-up of one of the stands.  I've depicted the brigade in newly issued uniforms from the Columbus, Georgia, depot.  It is a light gray/brown with infantry blue cuffs.  I used Folk Art Barn Wood as the base uniform color with Americana Uniform Blue on the cuffs.  For more information on this uniform, as well as pictures of surviving examples, see Geoffrey Walden's excellent on-line article "Confederate 'Columbus Depot' Jackets."  This uniform will also equip another of my soon to be painted Confederate brigades, Helms' "Orphan" Brigade of Breckinridge's Division.

Posted by ColCampbell50 at 9:48 AM No comments:

Once More into the Yellow Sea

Last month (on March 2, to be precise) I ran a pre-dreadnought game that pitted my Russian and Japanese fleets against each other.  The scenario was a Russian breakout from Port Arthur which the Japanese were trying to prevent.

The ships are all 1:2400 scale from Panzerschiffe and were acquired as a single lot many years ago.

The rules we used were David Manley's "Broadside and Salvo" which is included in his "White Bear/Red Sun" campaign rules, available from the Wargame Vault.

Although the Russians lost, both sides had a good battle.
Posted by ColCampbell50 at 2:10 PM No comments: