Genesis of My TMP Moniker

Just asked over on The Miniatures Page is how did you come by your moniker on TMP.  Well as many of you can guess, mine is "Col Campbell" from my very first painted wargame mounted commander - from the venerable Airfix Waterloo Highland box.  Since Campbell is one of my family names, the mounted officer became Colonel Campbell and has led my Napoleonic British forces since the early 1970s.  And yes, even though an Airfix plastic figure, he's still going strong.

And realizing that I've never posted a picture of the figure, here it is:

He was painted during my 1970-1971 third year at university, not long after meeting my long-time friend and wargaming buddy, Lord Sterling.  We've been gaming together now for 49 years!!!

As I mentioned in a previous post, I have now changed my Confederate cavalry basing from their temporary "Fire and Fury" basing to my permanent "On to Richmond" basing.

The brigade is incomplete, missing 7 mounted and 3 dismounted stands.  They will be procured in the near future to complete the brigade.  Another horse-holder stand will be created out of on-hand figures.  The horse-holder stands will be used to show the position of the brigade's horses when the troopers are functioning in their dismounted capacity.

I also plan on raising a second Confederate cavalry brigade in the near future but an unsure of which one it will be.  There were eight cavalry brigades in the Army of Tennessee at the time of the Tullahoma-Chattanooga-Chickamauga campaign which is the timeframe I'm using to raise my Union and Confederate forces.

Posted by ColCampbell50 at 3:36 PM No comments:

While I was painting Confederate cavalry for our just completed Chickamauga game, I also finished painting and basing another brigade for Hardee's Corps of the Army of Tennessee.

This is the brigade commanded by Brigadier General Lucius Polk (no relation to the Bishop) and consisted of the 1st Arkansas, 3rd/5th (consolidated) Confederate, and 2nd, 35th, and 48th Tennessee Infantry Regiments.  The figures are 15mm Old Glory miniatures and are dressed in my rendition of a "drab" colored uniform which was common in the Confederate west.  They are based for the venerable "On to Richmond" rules.

Now I just have to paint Wood's Brigade and I'll be completed with Cleburne's Division.  That will put my half-way through painting my Confederate infantry forces, leaving just the three brigades of Breckinridge's Division and the two brigades of Bowen's Division (borrowed from Pemberton's command in Mississippi).
Posted by ColCampbell50 at 4:28 PM 1 comment:

I should have uploaded this several days ago.  This is almost all my contribution to our just completed Chickamauga game (Saturday, Sep. 21).


They are a mix of various 15mm manufacturers.  Although currently mounted for "Fire and Fire" they will be remounted this coming week as Pegram's Cavalry Brigade of the Army of Tennessee.
Posted by ColCampbell50 at 4:19 PM 1 comment:

On "Talk Like a Pirate" day, my grand-daughter's school had a "dress like a pirate" day, their mascot being a pirate.  We outfitted her with a head scarf, a jeweled parrot pin, and a treasure map. 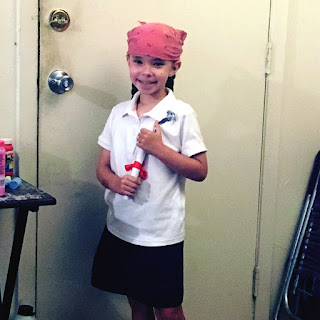