My wife and I provided the flowers in the sanctuary of our church for this past Memorial Sunday. 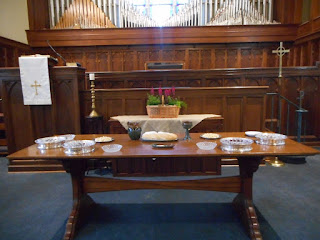 By the way, this is a Presbyterian Church, USA, congregation.
Posted by ColCampbell50 at 4:17 PM No comments:

A Blast from the Past

Rediscovered this vintage wargaming photo as I started going through boxes of photographs from my late parents house.

This is a picture of a Napoleonic wargame fought in the early 1970s at my parents house.  We are in the wing that contained my two brothers and my bedrooms in the 30' x 10' "playroom" outside the three bedrooms.  It was just enough room for a gaming table.

I don't remember all the participants, but Jay S. is seated on the lower left with the late Marshall Jones standing at the left rear.  Tim C. is barely seen standing on the right.

The Sword and the Flame 40th Anniversary Edition!

Just received this in the mail from Lori Brom announcing the upcoming 40th anniversary edition of  the classic "The Sword and the Flame" Victorian colonial rules. 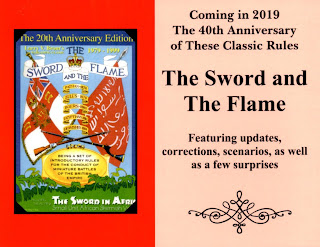 Lori said that they are planning a release late this year, November or December.  Watch for more news!

Posted by ColCampbell50 at 8:59 AM No comments:

Labels: The Sword and the Flame, Victorian Colonial

And some more of my 15mm American Civil War project completed.

My Confederate force is based upon Lieutenant General William J. Hardee's Corps of the Army of Tennessee at the beginning of the Tullahoma Campaign in the summer of 1863.  Here we have Hardee's command stand as well as that of Major General Patrick Cleburne and Cleburne's division artillery.

Organized for the "On to Richmond" rules which calls for an artillery stand to represent approximately 12 guns.  For the Confederates, that's three of their 4-gun batteries which was the standard for the Army of Tennessee in 1863 and 1864.

Posted by ColCampbell50 at 3:45 PM No comments: