Some weeks ago, I acquired some Barry Minot sculpted tricorne era figures from an eBay seller. At the time I mentioned that I would take some more pictures of them. Well, I finally got around to it!

Both pictures show a comparison of the three poses (firing, at ready, and advancing) of the Minot figures I received to some other manufacturers' figures. The Minot figures appear to be Prussian, but they will probably become another regiment in the army of the Margraviate of Carpania. 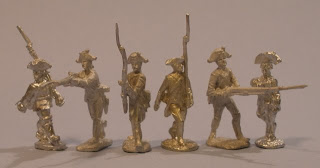 You can see that the Minot figures are very similar in size to the Sash & Saber, RSM95, and Old Glory figures. Since all I was able to get were Minot hatmen, I'll need some command figures, which will probably come from RSM as these appear to be the best match in style and size.

As I prepare for a two game mini-campaign on the North Central Frontier in Victorian India, I have added another unit to the Haddabiera tribe who inhabit the Vale of Swat. This mini-campaign will culminate in the 2nd Annual George Carr, Sr., Victorian Colonial game at our regional convention, Bayou Wars, held in late June in New Orleans ( Bayou Wars ).

These are the venerable Ral Partha Pathan warriors. Although not readily apparent from this picture, all the warriors are armed with rifles of various types. It will join two other Haddabiera units that were painted many years ago. A fourth infantry unit, a cavalry unit, some gunners, and some mounted command figures are in the painting queue.
Posted by ColCampbell50 at 3:01 PM No comments:

The Reich Duke and Duchess and young Basil are on their way to the Persipality of Monte Cristo. Soon they will pass the ruins of Castle Valkenhayn, former ancestral home of the Counts of Valkenhayn, whose last surviving member commands the Hapnich Dragoon Regiment of Carpania. [As always, please click on the pictures for a larger view.] 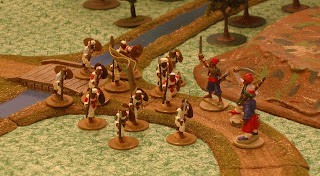 Agents of the Deylicate of Bizercca have gathered the whirling dervish tour group to issue final instructions on the ambush of the ducal party and the kidnapping of young Basil. 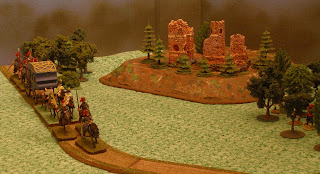 The coach, with its Cossack escort, passes the castle ruins.
Can they not see the dervishes hiding in the woods? 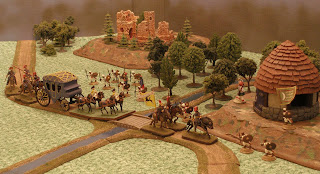 Suddenly the ambush is sprung.
Screaming dervishes dash towards the escort and the coach. 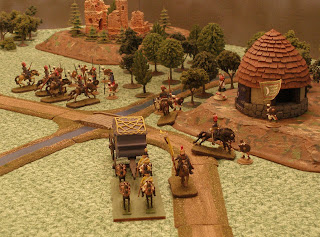 While the coach outriders jerk the horses off the road,
the Cossack escort charges the ambushers. 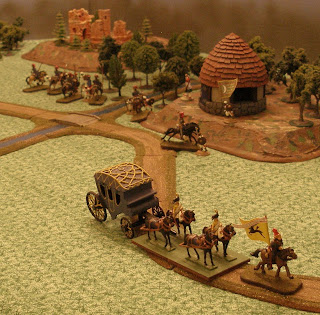 Escorted only by the Cossack color bearer, the coach flees down the road.
The rest of the Cossacks bravely sell their lives to protect the ducal party's escape.

But what will this mean to relations between Morea and the Deylicate? Or between Carpania and its local foes - Courland and Sachsen-Wachsenstein? After all, the attack took place in Carpania against an Imperial Reich Duke and his young guest. And the dervishes were guests of the Carpanians at Potzdorf. Surely diplomatic notes will be exchanged. Stay tuned!
Posted by ColCampbell50 at 10:17 AM 6 comments:

Departure of the Reich Duke

As the evening festivities drew to a close, young Basil danced many dances with Princess Buttercup, daughter of the Margrave of Carpania, his host. The older guests commented about what a striking couple they made.

But the two youngsters were oblivious to the gossip as they just enjoyed each other's company. Buttercup, being a staunch Lutheran, knew that her father would never consent to a marriage with a Roman Catholic, and a supporter of the Emperor to boot! But he cut such a fine figure and was such a good dancer that she decided to ignore the incipient scandal and just have a fun evening. 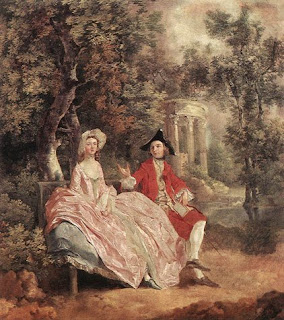 Buttercup and Basil enjoying the night air and each other's company.
But the next morning came all too soon. The Reich Duke and Duchess and young Basil must depart to continue their regal journey. 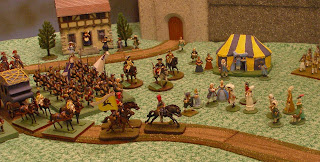 The Margrave and Margravine of Carpania and Princess Buttercup, Major General Campbell, OT, and the Dukes and Duchesses of Courland and Sachsen-Wachsenstein join to wish adieu to the Reich Duke and Duchess of Beerstein and young Basil, King of the Romans.
The coach approaches, accompanied by the escort from the Timofievich Cossacks of the Army of Courland. 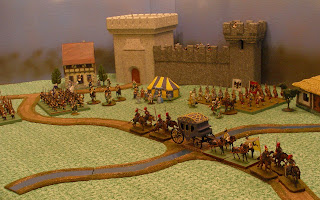 Finally all the god-byes are said and the ducal party clatter away from Potzdorf en route to their next stop, wherever that might be.
But will their journey be a safe one? Or will it be fraught with danger? Only time (and the machinations of Stagonia and the Deylicate) can foretell!
Posted by ColCampbell50 at 12:17 PM 4 comments:

The Party for the Reich Duke

I've tried something new with this entry. I created these slides using PowerPoint and then converted the presentation into individual jpg formatted images which I downloaded into the blog. If this works OK I will plan on using it in the future for battle reports and other purposes. I would appreciate your comments. Please click on the image groupings for a larger picture. 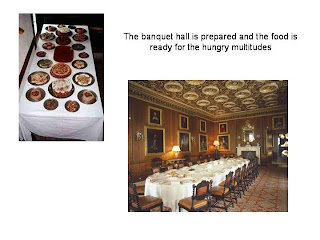 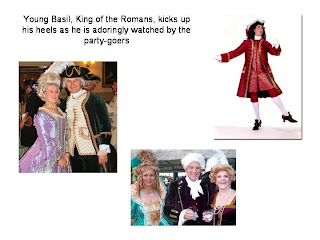 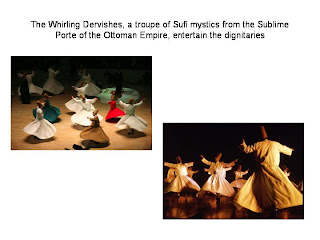 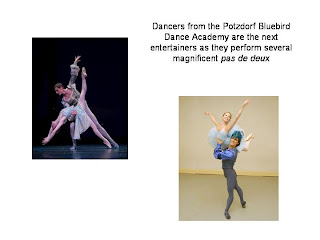 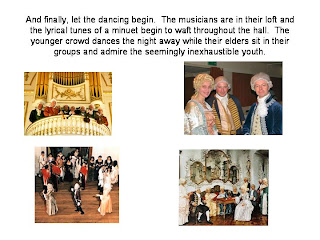 Finally, the glorious day has come! Field Marshal the Reich Duke Wilhelm of Beerstein has arrived in Potzdorf, the capitol of the Margraviate of Carpania. As usual, please click on the pictures for a larger image.

The officials and troops gather on the greensward in front of the eastern gate of Potzdorf. The courier gallops closer, bringing the word of the Reich Duke's imminent arrival. 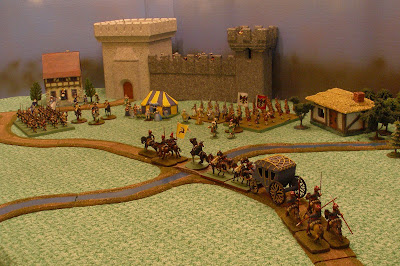 The carriage halts to allow the Reich Ducal party to disembark. 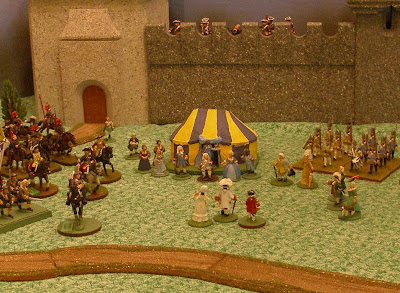 The Reich Duke and Duchess and young Basil, King of the Romans, approach the welcoming dignitaries. 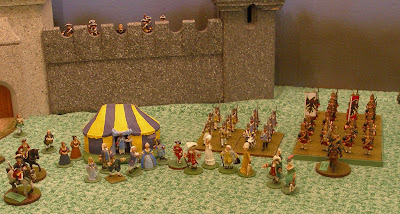 Major General Campbell, OT, has now dismounted and joined the dignitaries for the official portrait of the visit. On the wall behind, the party is guarded by one of the fine Carpanian 12-lbrs meticulously forged by the Barony of Eisenmuhlen. The converged grenadiers of Sachsen-Wachsenstein and the Grenadier Regiment Pavlovski (Courland) form part of the honor guard. The rest of the honor guard (out of the picture to the left) are Campbell's Highlanders and the converged grenadiers of Carpania.

The Reich Duke's visit will continue tomorrow as the entertainment begins - fine food, dancing, and music to delight and please the senses.

As an aside, this is the first use of my "new" backdrop. I spray painted a large section of folded corrugated board a nice medium blue, then sprayed on some greenery at the bottom and some clouds along the top. I'll be using this inexpensively produced backdrop in future pictures.
Posted by ColCampbell50 at 1:01 PM 6 comments:

With the arrival of Field Marshal the Reich Duke Wilhelm of Beerstein to the Margraviate of Carpania and the Duchies of Courland and Sachsen-Wachsenstein, preparations are in a fever pitch. Foodstuffs are being gathered from far and wide and the armies of the three statelets are polishing their brass and whitetening their belting. 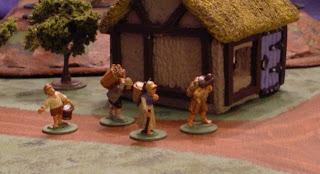 A peasant family brings their goods towards Potzdorf.

At the Courland border post, a carriage approaches, escorted by Cossacks. Major General Seamus Campbel, OT, and the border post commander are waiting.

The carriage comes to a stop and the Reich Duke alights, followed by young King Basil of the Romans. 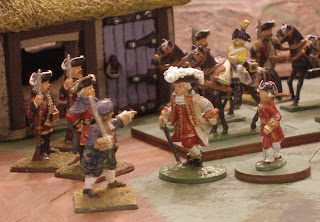 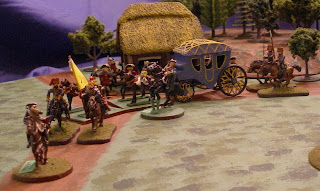 With Campbell now mounted and a courier hurrying to Potzdorf, the royal visitors leave the border post.
Note: The figures are from a variety of sources. The Reich Duke is one of the Blue Moon duelling party line. Young Basil is a RAFM British officer. Campbell is a Front Rank Highland officer. The courier is an RSM figure. The Courland border guards are a Front Rank Russian artillery officer and some artillery fusiliers. I'm not sure what manufacturer produced the cossacks. The peasants are Foundry. And finally, the coach is one of the wedding favors from Michael's Craft Shop with Minifig limber horses and Minifig Prussian cuirassiers as out-riders.
Posted by ColCampbell50 at 4:00 PM 7 comments:

I finally finished painting the second grand division of my Campbell's Highlanders. These 12 figures seemed to take forever to finish, but I think it was just not wanting to face trying to replicate the plaid on the kilts. I got a smaller "spotter" brush and it made painting the stripes much easier. So at last they are complete! 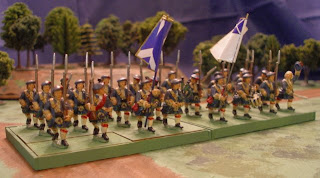 Both grand divisions in all their satorial Highland glory!

They are all Front Rank Jacobite Rebellion figures, from their "Government Highlanders" line. The officer waving his hat is one of the special figures (John Campbell, Earl of Loudon) while the other officer (on the left of the image with the red sash) is the line officer.

This unit will join the army of the Margraviate of Carpania and will be brigaded with the converged Carpanian grenadier corps.
Posted by ColCampbell50 at 3:50 PM 4 comments: