April wasn't a very productive month although I started a few units that aren't finished yet.
My first unit is composed of old Spenser Smith plastic cavalry, painted as the Constantine Dragoons of the army of the Duchy of Courland. The mounted officer and four of the troopers came to me in an eBay lot with a large batch of artillery. When I lamented on the OSW Yahoo group about what to do with the four troopers, Peter Constantine of the UK sent me eight figures, including the mounted officer. 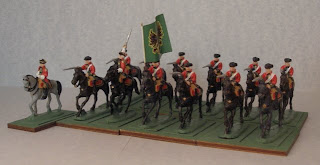 So I made him the honorary inhaber of the unit and asked him to suggest a uniform, which was a red coat with green facings. I liked that color scheme and the Constantine Dragoons were raised. I used the new Krylon plastic spray paint to prime them black and then used craft paints over that. The detail on these older figures was severely lacking so it was a chore to get the various bits and bobs painted. After glueing them to metal bases (for a little heft) I attached them by twos to 2" square Litko bases.

The remainder of my April painting was Victorian colonials figures to start getting ready for the George Carr, Sr. Memorial Zulu game at the Bayou Wars convention in New Orleans in June (20-22 to be exact). George Carr, Sr. was a friend and fellow gamer who died of cancer late last year. He gamed with Larry Brom (of the Sword and the Flame fame). The first time I went to Bayou Wars many years ago, George and Larry ran a huge Zulu game and invited members of the Mardi Gras Crewe of Zulu to come open the game, which they did in their (modern) Zulu finery. It was something to remember. So if you are in the southeast or south central USA and want to know more, check out the details at http://www.bayouwars.org/ .

The above picture is my first battery of British artillery, consisting of three muzzle-loading rifled guns and their crew. For the Sword and the Flame, there are 4 crew per gun, but we're using Larry Brom's convention rules, "By Battalion, Volley Fire!" which only has 6 crew for the three guns. By the way, (blatant advertisement) you can get any of Larry's rules at his web-store: http://www.sergeants3.com/ . 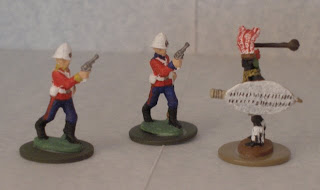 Next month I have to finish a unit of red-coated British infantry which will be painted as the 24th Foot (of Isandlwana and Rorke's Drift fame). May will also see more Imagi-Nations Seven Years War figures painted as I continue to prepare for the Big Battalion BAR game in Austin, Texas, in November. Details for that game, which will include Der Alte Fritz (http://altefritz.blogspot.com/) and Mssr. Chevert (http://www.oldregimerules.com/) among the gamers, can be found here: http://texasbigbattalions2008.blogspot.com/ .

So for April I painted 1 mounted officer and 12 Spenser Smith cavalry, 3 Ral Partha British guns, 1 artillery officer and 4 gunners, 2 foot officers, and 1 Zulu induna, all Ral Partha figures. Total is 13 mounted, 8 foot, and 3 guns, or 37 Olley points if my figuring is correct.