The command group for the 25th Infantry Division (Grand Ducal Hessian) of the IX Korps has joined the German forces in France.  Commanded by Prince Louis von Hesse, the heir to the Grand Ducal throne, it consisted of two infantry brigades (49th and 50th), a cavalry brigade, and an artillery force of six batteries, divided into two abteilungen (or battalions).

Organized for Larry Brom's "Chassepot and Needlegun" rules, a division command group has three figures.  The two foot figures are Foundry Miniatures but I'm not sure which manufacturer made the impressive mounted officer.  He was a single figure labeled "EXT-15 Baron von Gruber."  Any assistance in identifying the manufacturer would be appreciated.

And the Hessian artillery force received the 2nd Light Battery as a reinforcement.  It consists of three light 4-lb guns, each with two gunners, per Brom's organization.

The guns are substitutes using Ral Partha Colonial Krupp guns.  They are close enough to what the Prussian guns looked like.  The gunners are from Castaway Arts run by my friend from Down-Under Gerry Webb.

I'm now working on the command group from the French 2nd Loire Division and the 8th Heavy Artillery Battery.  I'm hoping to get them completed before the end of the month.


On this Memorial Day during the 75th anniversary year of the ending of WW2, I'd like memorialize two WW2 veterans who are dear to my heart -- my father and my father-in-law. 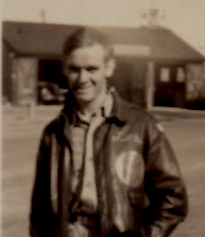 My father, Leslie Pelham Pitts (1922-1976), served in the US Army Air Corps/Force as a top turret gunner and flight engineer of a B-17 heavy bomber in the 731st Bomb Squadron, 452nd Bomb Group, 8th Air Force, based at Deopham Green, England.  You've read about his exploits in previous blog posts ("What Did You Do in the War, Daddy?").  This picture was taken in the fall of 1945 at Deming Air Base, New Mexico as he was being demobilized.  He's wearing his self-decorated leather flight jacket. 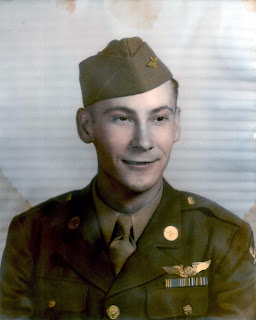 My father-in-law, James Curtis Triplett (1918-2003), served in the US Army Air Corps/Force in a medium bomber squadron assigned to the China-Burma-India Theater.  I don't know which one, but I do know that they transited across North Africa after the German/Italian surrender in Tunisia because he found an M1911A1 pistol in the desert outside the air field which my wife and I still have.  Once he got to India, his primary task was training Chinese aerial gunners for the Chinese Air Force. 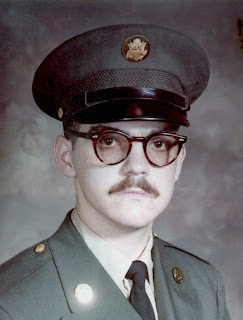 And although not a WW2 veteran, I would be remiss if I didn't memorialize my brother, Patrick Arthur Pelham Pitts (1952-2010), who served in the US Army during the early 1970s as a personnel clerk with the US Army Security Agency in Augsburg, Germany and at Goodfellow Air Force Base, San Angelo, Texas.

You are all missed dearly!  Requiesce in pace, comrades. 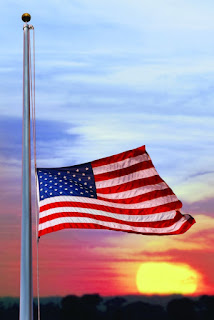 
On this, the 75th anniversary of the Allied victory in Europe, I was going to fly the flag in front of my house.  But due to inclement weather, primarily strong winds, I could not.  So I'll do it virtually.

To all our veterans, past, present, and future, may this day be remembered in honor for the sacrifice we have made.