And Some More Cavalry

First off, I've "updated" my second unit of Byzantine heavy cavalry courtesy of my good wargaming buddy Lord Sterling.  If you'll recall from a previous post, I was missing a figure and had four regular heavy cavalry figures in the unit.  Now I have the missing rider and four "new" super heavy cavalrymen on fully armored horses.  Please click on the image for a larger view.
I also added an Arabic style light cavalry unit to my Sassanid forces.  They are Essex Miniatures Arab Conquest light cavalry, #AEA-4.  I've given them a "desert" base color. 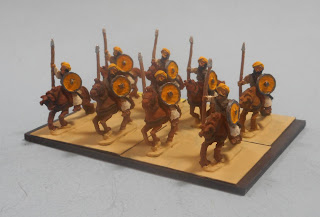 I haven't done much this past week due to the unusual inclement weather we've had here in Mississippi.  See my two previous posts for some details.  When we get water pressure back, I'm sure I'll feel more like painting figures.  I have some Asiatic horse archers and Sassanid auxilia infantry ready to be undercoated and paintted.
Posted by ColCampbell50 at 3:25 PM No comments:

We are still effected by the winter storms this past weekend.  We were without electricity for about 17 hours from Wednesday evening until midday on Thursday.  Not quite as long as happened during Hurricane Katrina (Aug 2005) but distinctly much more uncomfortable.  Of course our woes are nothing compared to our neighbors in Texas.  We've also lost water pressure throughout almost the entire system here in Jackson.  So I've been collecting and melting the ice from our driveway for toilet flushing water.

The roads and streets are starting to clear and will do more today as the sun is out in all its glory.  Temps are still just below freezing but we expect much warmer temps tomorrow and continuing into the coming week.
Us Southerners are just not ready or equipped for snow/sleet/freezing rain and below freezing temps.  My daughter told us yesterday that she's e-friends with a gal who lives up north.  This gal was jibbing at the South for not being able to deal with very cold weather.  My daughter replied that it would be the same as a northern state having to cope with a hurricane.  The "Yankee" gal responded that she saw the point.
But almost the entire country is dealing with this severe winter weather in one form or another.  I guess that Puxsutawney Phil was right a couple of weeks ago that we would have six more weeks of winter weather.  But for me, I'm more than ready to see spring!!!
Y'all stay safe, y'hear!
Posted by ColCampbell50 at 11:21 AM 4 comments:

Well, the weather has been super lousy these past several days here in the "sunny" South.  We've had very usually frigid temperatures since Saturday night that has been coupled with freezing rain and then sleet mixed with snow on Monday.  Everything is frozen!  Even parts of the Interstate system are closed because the trucks can't gain traction on certain slopes are are blocking all the lanes.  Here are some views from my front window of my neighborhood in south Jackson.  I know we haven't been as affected as other parts of the US but this sort of weather is very rare this far south.

Looks like the wintery precipitation is finally stopping but the temperatures will continue to fall through the 20s (F) into the teens as the day progresses.  The wind chill will run into the single digits above zero overnight and into tomorrow.  Supposedly we will be below freezing (32 F) until sometime on Wednesday.
Posted by ColCampbell50 at 11:01 AM No comments:

Yesterday I completed the second of two Sassanid Persian super heavy cavalry (i.e., cataphract) units for my Commands  & Colors - Medieval forces.  This unit is composed entirely of Old Glory 15s ES3 Sassanid cataphracts.  They were fairly straightforward to paint.  The lances were separate pieces of mild steel wire that I had to cut into two equal lengths.  A pair of wire snips made quick work of that task.  Please click on the photos for a larger image.
Sine the first unit is predominately red, I decided to make this one's color yellow.  I used Folkart yellow ocher for the helmet and horse plumes, horse reins, and riders cloaks.
Next in line are a unit of Middle Eastern light cavalry and a unit of Asiatic horse archers, both for the Sassanid army.  After them will be a unit of Byzantine super heavy cataphracts, which complete the forces needed for the Satala (530 AD) scenario.
Stay safe!
Posted by ColCampbell50 at 3:27 PM 1 comment:

Right at the beginning of February I completed a final fourth stand for a Byzantine super heavy cavalry unit (AKA cataphract/klibanophoroi) unit for my Commands & Colors - Medieval forces.  This unit is a hodge-podge of figures representing a hastily thrown together command.  That's my story and I'm sticking to it!

And now, each stand by itself:

Posted by ColCampbell50 at 7:29 PM No comments:

I completed two more cavalry units for my growing Commands & Colors - Medieval forces.
The Byzantines added a second unit of light bow cavalry.  These are vintage Miniature Figurines Byzantine Cuman mercenary cavalry, D-373.
And the Sassanids have added a unit of heavy cavalry using some of the Essex Asiatic horde figures.
Next up are four Byzantine super heavy cavalry figures to complete a unit and a another unit of sixteen Sassanid super heavy cavalry.
Posted by ColCampbell50 at 4:24 PM No comments: