A work in progress posting showing the three "Asturian" (Spanish) gunboats is available on my naval blog:

Col Campbell's Shipyard
Posted by ColCampbell50 at 10:15 AM No comments:

Please see ColCampbell's Shipyard blog for the first pictures of one of my three gunboats for the Capitania General  de Florida mini-campaign.

Last night I completed the sailors and Marines that I had on-hand for my upcoming Capitania General de Florida game which will involve some naval action as well as land action.  Some of the figures in the pictures below have been painted for a long number of years and some were just done this month. 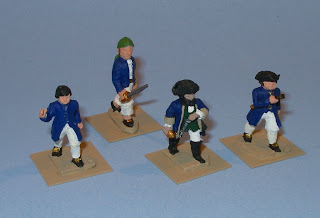 These stalwart officers will command the row-galley and some of the gunboats.  All four were recently painted.  The front three are 25mm Miniature Figurines while the one in the back is a 25mm Abbott figure.  The officer in the center is from the old MiniFig Pirate line.  The one of the left is from their Napoleonic special wagon set.  The one of the right is labeled as an AWI figure but I couldn't find a correlation of his number to the current list. 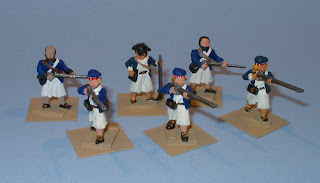 These armed sailors are also 25mm MiniFigs.  The three firing figures are from the AWI line and the three in the rear are from the old Pirate line.  I have others of these that I use as New England Continental regimentsin my AWI American army.  Three are old figures that have been painted for years and three were just painted. 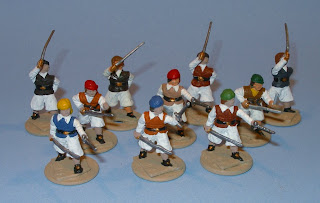 These 25mm MiniFig sailors are all from the old Pirate line and have been painted for years. 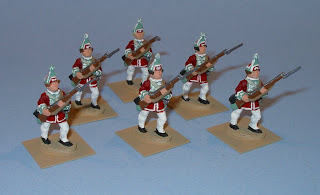 These are RAFM figures from their F&IW line.  They are supposed to be SYW era British Marines but the small mitres don't exactly match what was being worn at this time.  So I've painted them as grenadiers from the 24th Foot who just happen to have been seconded for naval duty.  They will appear again as part of the converged Britannian grenadier battalion in later battles.  They were just completed last night. 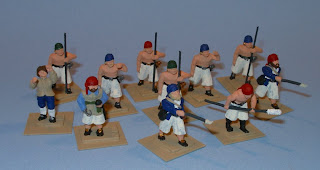 The galley and the gunboats require gunners to serve their artillery and these 25mm MiniFig Pirate line gunners will fill the bill.  One figure (second row, far left) is from the Napoleonic special wagon set.  Four of the figures have been modified to hold a lever used to train the guns.  All were recently painted.

These are the rest of the gunners who have been painted for several years (or longer in the case of four of them).  All but two (center rear) are 25mm MiniFig Pirate gunners.  The two that are different are from a manufacturer whose name I have forgotten.
I wish that I had more of the old MiniFig Pirate line figures.  They made excellent ship's crew and gunners.  But I'll just have to get by with what I have for my game in two weeks.  Between now and then I'll be laboring to paint the guns for the ships and get the ships ready, including equipping them with sails.
Posted by ColCampbell50 at 1:13 PM 3 comments: