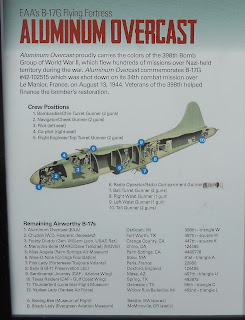 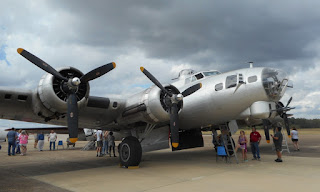 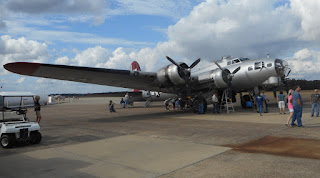 From ACW to FPW

Although I haven't made any posts lately, I have been painting away on my Franco-German War (as I call it) figures as well as mounting some ACW pictures painted by my friend, Larry the Marine.

After hosting a FPW game in late July, I got on a painting kick to finish some French and Prussian figures.  I already had one battalion of the French Republican Volontaires de l'Ouest painted.  I bought enough figures at Historicon to complete the other two battalions of the regiment.  Here is the 1st battalion, minus its flag which has since been prepared and mounted. 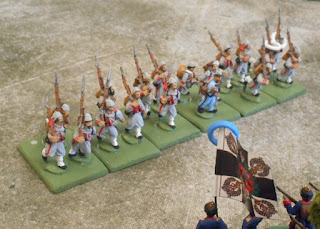 The Volontaires de l'Ouest were formed from the old Pontifical Zouaves and were probably one of the better regiments in the Republican armies to the south of Paris.  In my army, they form part of the XV Corps, Army of the Loire.  The figures are actually Union zouaves from Sash & Saber's ACW line since I couldn't find any appropriate zouaves wearing kepis.

Continuing with the FPW theme is the headquarters of IX Korps, 2nd Prussian Army which in my army is deployed south of Paris to keep the Loire rabble from interrupting the siege of Paris. 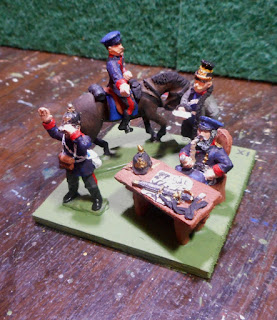 This HQ group utilizes a mix of Foundry, Castaway Arts, and Irregular (I think) figures to depict General der Infanterie Albrecht Gustav von Mannstein and his battle staff.  His uhlan aide is handing him a dispatch from a subordinate commander while his artillery staff officer keeps track of the battle through his binoculars.

Turning to the American Civil War, my gaming friend Larry the Marine recently painted a division of Union troops for me.  I'm organizing Union and Confederate forces for the Middle Tennessee campaigns of 1863 using the On to Richmond rules where each brigade is composed of 3 to 8 stands of figures.  Here is Beatty's 1st Brigade, Negley's 2nd Division, Thomas' XIV Corps, Army of the Cumberland.


These are Old Glory 15s Union figures from which I have trimmed the bayonets as they are in firing poses.  I use 8 figures on all the bases of each brigade except for one upon which I place a mounted officer (the brigade commander) and 6 figures.

I've made previous posts showing some of my first Union and Confederate units which you can see by clicking on the "American Civil War" label in the list below.

Posted by ColCampbell50 at 7:59 PM No comments:

Can You Hear Me Now?

On Thursday and again today, we played a small Franco-Prussian War game involving a French attack on a Prussian supply convoy.  On both occasions, the French won handily.  But that's not the point of this post.

The senior Prussian commander was a conversion that my good friend and gaming buddy Jay, Lord Sterling had made.  He used a standing figure in a European military style overcoat and added a Prussian head in helmet.

EDIT:  Since I posted this, I found that I have the same figure who is actually holding what appears to be a cigar.  So not a conversation, just an unusual pose that led to the funny appellation.

We though that he looked like he was trying to make a cell phone call.  Jay said that he thought the original figure did have a cell phone or a walkie-talkie in his hand.  Just goes to show that you can't get away from the blasted devices no matter where in time you travel.

The Jager Corps Staffeldunkel of the Margraviate of Carpania has added some additional firepower - an amusette!  Manned by two volunteers from the corps, the amusette should prove useful to the corps as it acts as part of either the advanced guard or the rear guard for the Carpanian field force.


The amusette is a Fife and Drum Miniatures piece (# AE-006).  I obtained it from Der Alte Fritz some time ago and have just gotten around to painting it.  The crew are in the green uniform of the Staffeldunkel jagers with Britannian light dragoon helmets procured by the major so the team can be more distinctive.

Posted by ColCampbell50 at 9:58 AM No comments:

I am almost finished with the limber and horses for the Fife and Drum AE-005 limber but I'm not sure of the order in which the two horses should be placed.  There is no picture in the Fife ad Drum/Minden web store to help.  Should the ridden horse come in front or should it be in back close to the limber?

Our war gaming group had its first big WW2 micro armor battle using the Blitzkrieg Commander II rules.  It was set in the North African desert somewhen around the Crusader offensive period.  The battle pitted parts of the German 15th and 21st Panzer Divisions against parts of the British 7th Armored Division.  The troops were supplied by Electric Ed and me and the terrain by me.  We played on an 8' x 5' table set up in my garage.

In BKC-II terms, the Germans had some 9690 points and the British had some 8605 points, each divided into two battle groups.  The Germans had four panzer battalions, plus reconnaissance, artillery, and anti-tank guns.  The British had six armored regiments, plus reconnaissance, artillery, and anti-tank guns.  Neither side had any infantry.  Almost all of the vehicles are from GHQ's very nice 1:285 scale range of WW2 micro armor.

The scenario was an encounter battle as both sides sought to reduce their opponents strength and break one or both of the enemy battlegroups.

And now on to the action.  (Note:  All photos taken from the British point-of-view.) [Please click on the photos to enlarge them.]


The German tank and anti-tank fire was very effective, knocking out almost all of the 2-pdr portees, most of the British recce, and a significant number of British tanks.  The battle ended after the fourth (of eight planned) turns with a significant German victory.

We enjoyed the rules and the game.  This is definitely a rule set we'll continue to play as Ed and I are still in the process of raising our troops.  Our target is for the Germans to have the 15th Panzer Division and the 5th Light/21st Panzer Division, while the British will have the 4th and 7th Armored Brigades of the 7th Armored Division and the 7th and 11th Indian Brigades of the 4th Indian Infantry Division, reinforced by two armored regiments from the 1st Army Tank Brigade.

As I stated in the last post, I do have some additions to my 1:285 scale German and British battle groups.

But first, some additional formations not pictured in the last post:


Both of the headquarters elements will have more "foot" figures added to the bases.


And now pictures of the two battle groups.

The German 5th Light Division/21st Panzer Division was in the midst of reorganizing from its light composition to its panzer composition.  I've taken the deliberate step of "freezing" its organization at the light composition.  Not all of the formations of the division are pictured, only the 5th Panzer Regiment and some supporting divisional reconnaissance, artillery, and antitank elements.


There will be more added to these battle groups, so stay tuned.
Posted by ColCampbell50 at 4:45 PM No comments:

I'm Back with WW2 North Africa

Well, it has been months since I've posted anything.  A combination of a leg injury and a lackadaisical attitude have temporarily stymied my energy to post anything.

But that has changed as my leg is well on the way to recovery and my attitude has been correspondingly adjusted.

Back a number of months ago, three retired friends and I had several Thursday afternoon WW2 armor games using Lord Sterling's miniatures and several sets of rules he wanted to try.  These games pitted Americans and Germans in 1944 Northwest Europe.  They were fun.  Then one of my friends, Electric Ed, and I began to pontificate on how nice it would be to expand into the early North African desert (prior to Alamein).  One thing led to another and we are now building the 15th Panzer Division (Ed) and 5th Light/21st Panzer Division (me) for the Germans and several Commonwealth brigade groups for the British.

I ran a small game this past Thursday to introduce the "Blitzkrieg Commander II" rules.  It worked well I think.  I'll run another one next week and then a larger battle next Saturday for our larger wargaming group.

So far I've organized, painted, and mounted almost the entire 5th Panzer Regiment as well as an armored reconnaissance company, an armored tank destroyer battalion, and an antitank battery for the Germans.  For the British I have three armored regiments (read battalions), a reconnaissance squadron (company), and two understrength RHA antitank batteries.  I'm using the very nicely made GHQ Micro-Armor vehicles and figures.  The British forces will comprise the 4th Armored Brigade Group and the 11th Indian Infantry Brigade.

Some of my British vehicles are pictured below:

And some of my German vehicles are below:

As you can see from the above pictures, I've added unit identification labels to the back of each stand.  The British labels include the regiment (or battalion) name or number, the squadron/company/battery letter, and a number designating the vehicle within that unit.  The German labels are a take-off of the German regimental identification system.  Since all stands represent a grouping of 3-6 vehicles (platoon or battery) then the label will indicate exactly to what organization the stand belongs.  Two examples are:


Maybe tomorrow I can get some panoramic pictures of the two forces so you can see the extent of my newest madness.  More later!
Posted by ColCampbell50 at 4:26 PM 2 comments: