While I'm awaiting the start of my SYW imagi-nation game Saturday morning (see last post), I've been trying to finish some Napoleonic French figures for a May play test of one of my convention games for Bayou Wars in June.  This week I finally finished a French infantry brigade commander and one of his battalions, the 1st Battalion, 36th Leger Regiment.  All of these figures are either venerable "true" 25mm Jack Scruby castings or newer Historifigs castings which are the immediate descendants of Jack's figures.

Almost all of my Napoleonic forces are organized around the composition of the Prussian, Russian, and French/Allied commands that fought over Berlin after the summer 1813 armistice.  The various uniforms may not be entirely accurate but they are close enough for me as I'm not a button and lace fanatic with my Napoleonics.

﻿
The bases are by Litko, which is almost all I use nowadays.  I used to cut my own bases but I've found out the savings in my own labor more than overcomes the slight increase in cost.  Plus the Litko bases just look so good!

The other battalion (4th) of the 36th Leger is being painted and the rest of the brigade, two battalions of the 131st Line Infantry Regiment, are awaiting their turn under the brush.

Posted by ColCampbell50 at 8:58 PM No comments:


The campaign season is upon us.  The snows in the Thuringian Forest have melted and the grass is lush in the valleys and dales.  Commissary agents for the various Electoral and Imperium states as well as from Germania, Britannia, and Gallia have been scouring the countryside for food stuffs and animal fodder.  The bakeries and cannon foundries are working overtime.  Surely war is coming once again to Europa.


Having heard rumblings of Imperial activity in the Saxon lands near our neighbor and ally the Kingdom of Hesse-Seewald, the Markgraf has directed his small army to march southeast through Coburg to threaten the Imperial base at Bayreuth.  General der Infanterie Baron Rolfe von Stuppe, commander of the Carpanian army, is mustering his regiments, aided by a Britannian infantry regiment and heavy dragoon squadron as well as several guns.  Baron von Stuppe is using the appellation Electorische Armee Thuringen (Electoral Army in Thuringia) for his small force since Carpania supports the Electoral forces headed by King Friedrich II of Germania.

At the Imperial base at Bayreuth, the Reichsarmeeabteilung Obere-Sachsen (Army Detachment Upper Saxony) has been marshalling its forces under the command of Feldmarshall-Leutnant Freiherr Bernard von Alderheim.  It consists of forces from Courland, Sachsen-Wachsenstein, and Gallia.  Von Alderheim has deployed his pulk (regiment) of Courland Cossacks out to the northwest of Bayreuth to keep an eye out for the Carpanians, whom he is sure will march to the support of the Hesse-Seewalders.

For additional details of developments in Hesse-Seewald, please refer to these blog postings from Der Alte Fritz:
http://hesseseewald.blogspot.com/2015/03/paint-it-black-regulators.html

This is in preparation for a SYW imagi-nations game on Saturday, April 18.

Posted by ColCampbell50 at 2:21 PM No comments:

Fight for the Fosse Way

In preparation for a big Very British Civil War game at the UK's Partizan convention on May 31, Pete Barfield (Panzerkaput) asked that VBCW gamers run a game using the terrain that he will use.  We were to inform him of the results so he could make a compilation and use them as the starting point for the big game. 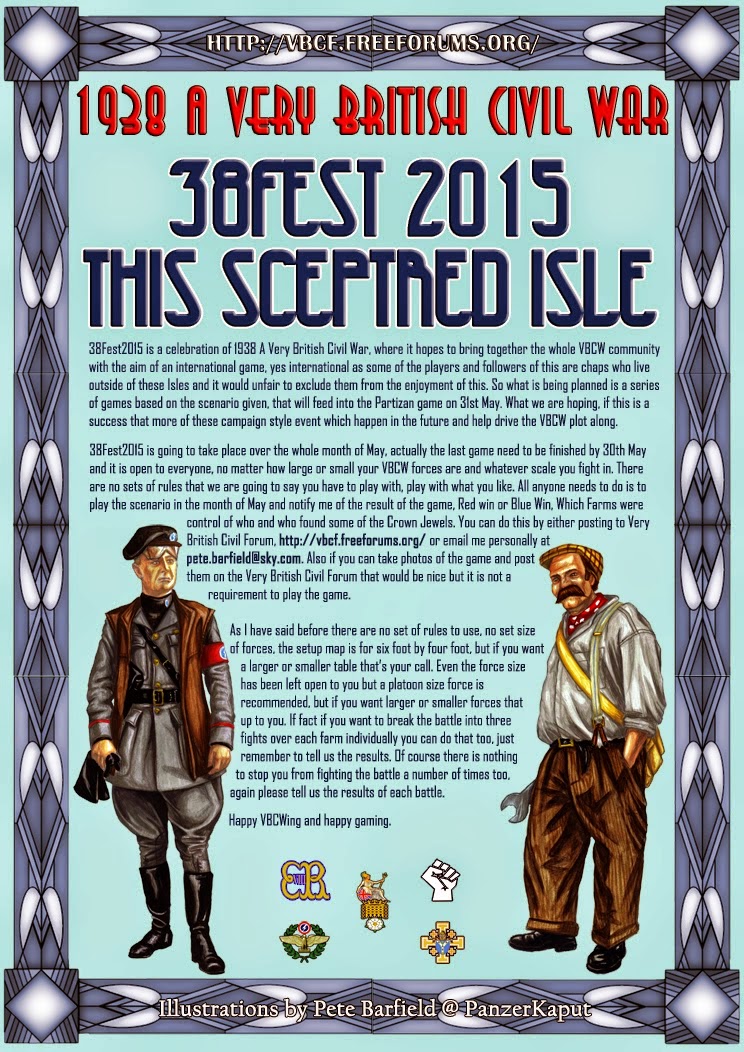 Since I was planning on running a VBCW game this spring, using Pete's scenario made it somewhat easier for me.  So with the basics out of the way, then all I had to do was figure out which rule set to use - "Went the Day Well?" or "The Sword to Adventure."  Of course I chose one that we've never played - "Rugged Adventures" from Pulp Miniatures:  http://pulpfigures.com/rugged_adventures/ and http://pulpfigures.com/downloads/.  I made up ten different commands, five for each side, assigned a playing card to each, and had the 7 players who showed up draw for their commands.  It turned out that we had four on the Royalists side (2 Royalists [Jay and Larry] and 2 BUF [Ed and Sean]) and 3 on the Anglican Coalition side (Anglican LDF [Travis], Socialist Brewery workers [Mike], and red sailors [Phil]).  What I didn't tell anyone was that there was a command of Ghurkhas inside one of the farmsteads escorting part of the crown jewels [game master contolled].  Surprise! Surprise! 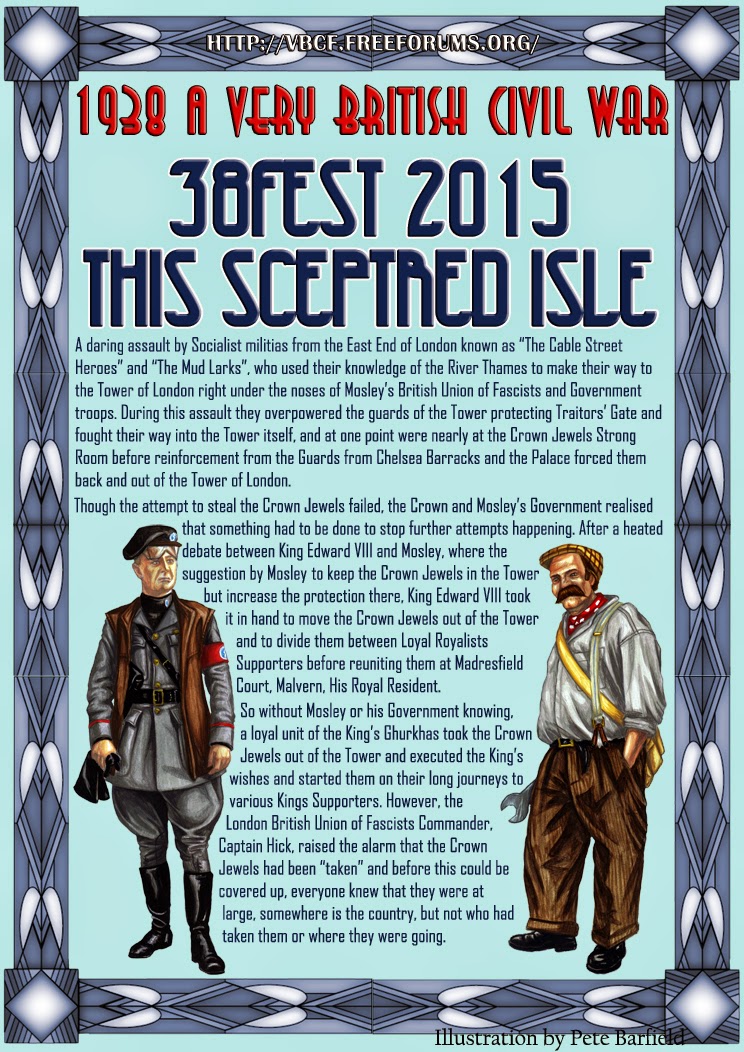 Ed and I took a lot of pictures but I only decided to use a small number.  The fighting broke down into three smaller battles over the three farmsteads.  Pete provided a table layout which I tried to follow as best as I could.

The battle ended then since I had to leave for a movie and supper date with my wife.  The Royalists held two of the three farmsteads - Brookfield and Grange - while the Anglican coalition only held one - Bridge Farm.  These results were reported to Pete.  We'll find out in two months how the big battle at Partizan turns out, having done our part in setting it up.

As far as the "Rugged Adventure" rules, they worked fairly well even though we didn't do much of the "role playing" that the rule set supports.  Unfortunately Travis was assaulted by twice his number and lost his command about two-thirds of the way through the game.  But having plenty of other commands left, he brought on a section of Anglican Coalition regulars who stopped the Royalists from sweeping across the battlefield.