Finally, the third division of the 5th Britannian Regiment of Foot have joined their comrades, marching into the barracks yesterday after completing the issue of their uniforms and weapons.


The third division, all Dixon figures, is composed of one officer (second from left, front rank), one sergeant (right figure, rear rank), one drummer (in front of sergeant), and nine hatmen.  The officer is ordering his men to "Preseeeeent  Arms!!" as General Manly-Barton  approaches.

The color party, one officer, two ensigns, and two color sergeants, await final finishing details, basing, and attachment of the flags.  Their picture should be posted tomorrow as well as a picture of the completed regiment.
Posted by ColCampbell50 at 7:51 PM 2 comments:

The Grenadier Company of the Britannian 5th Foot was completed last night and is now safely settled in their barracks for Christmas Eve. 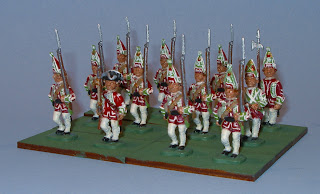 The Grenadier Company is composed of an officer (in cocked hat), a sergeant (with halberd), a drummer, and nine grenadiers, all Dixon figures.

They and the rest of the denizens of Col Campbell's Barracks wish a
MERRY CHRISTMAS
and a
HAPPY NEW YEAR
to one and all!!
Posted by ColCampbell50 at 10:06 AM 5 comments:

Tonight I completed two divisions of the Britannian 5th Foot Regiment.  These 24 Dixon British infantry are the first unit in a brigade that will be commanded by Major General Manly-Barton, Colonel-in-Chief of the 5th Foot.  Some of their in-progress pictures were featured in previous posts.  This unit is organized for "big battalion" gaming using Bill Protz's rules, Bataille de l'Ancien Regime [link].

The 5th Foot was part of the second reinforcement contingent to His Britannic Majesty's Army in Germania.  It is the senior regiment of that six regiment contingent.  For additional information on the "real" 5th Foot, see this Kronoskaf link. 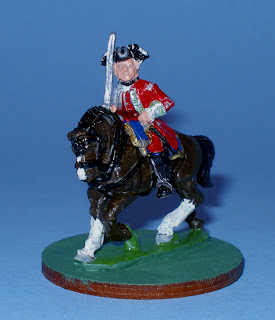 He is a Dixon mounted British officer who continues to wear the regimentals, although the coat has been heavily embellished with silver lace. 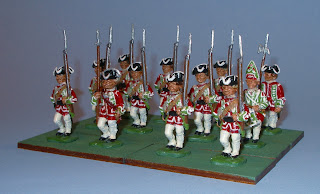 The 1st division of the regiment, consisting of one officer (second from left, front rank), one sergeant (far right, rear rank), one drummer (far right, second rank), and nine privates.  Notice the sergeant is checking on the alignment of his men.  You can almost hear him saying, "You there, Jones, watch your dressing, you slovenly excuse for a soldier of the King!" 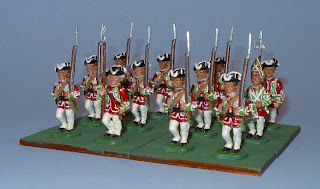 The 2nd division of the regiment, with the same composition and placement as the 1st division.
I am painting the 3rd division and the grenadiers, and still have to do the color party.

And a picture of both divisions, 1st on left and 2nd on right, with Major General Manly-Barton in the center.
Posted by ColCampbell50 at 9:30 PM 3 comments:

I've done a little more work on the Dixon figures, getting the lace painted on the first 12-figure division, including the drummer. 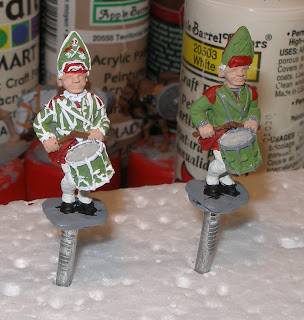 The drummers were the most intense to paint since each regiment's drummers seem to have worn a different amount of lace.  I had to guess on this regiment (the 5th Foot) since I didn't have a picture of its drummer.  Here you can see a drummer both before (right) and after (left) the application of the lace, plain white in this regiment.  I haven't decided if I want to try to do a replication of the regimental shield (St George killing the dragon) on the front of the drum. 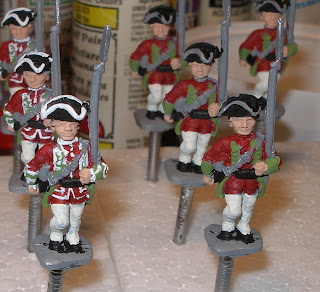 The hatmen of the center companies were a little easier than the drummers although nine of them more than made up for the single drummer.  Again, a before (right) and after (left) picture.  The belting and muskets haven't been done yet. 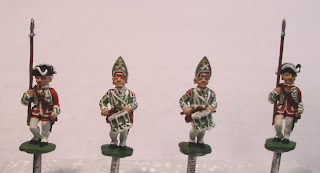 Finally a picture of the two officers and two drummers in the first two 12-figure divisions.

Posted by ColCampbell50 at 9:41 PM No comments: