The other day I completed painting the newly acquired gunners for the 3rd and 4th Light Batteries, part of the IX Armeekorps artillery for my 1870-1871 Prussian forces.

These two batteries each have 3 Frontier Krupp guns, 4 Foundry gunners, and 2 Frontier gunners.
Along with the 3rd and 4th Heavy Batteries, these compose the 2nd Battalion, 9th Artillery Regiment 'Schleswig-Holstein.'  The 3rd Battalion is attached to the 18th Infantry Division, IX Armeekorps while the 1st Battalion is attached to the 17th Infantry Division which is currently helping to guard the North Sea coast in northwestern Prussia.
This will basically conclude my painting 1870-1871 forces for a while.  Now to complete my Confederate forces so I can run some American Civil War games.

A Death in the "Family"

Just learned yesterday evening that long-time Jackson Gamer John Murtagh has died.  He apparently suffered a heart attack Tuesday afternoon.  According to his brother he had called 911 but after loading him into their ambulance the EMTs could not revive him.  John was a real larger-than-life character, always brimming over with enthusiasm for wargaming.  He was a feature at the local Bayou Wars and Colonial Barracks conventions and at Historicon. 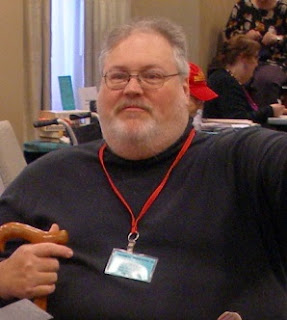 He had a large collection of self-cast 40mm Prince August figures that he used to run both SYW imagi-nations and AWI battles.  He was a resident of Portland, Arkansas.

He will be missed by us all.

After a brief diversion to paint WW2 German tanks, I returned to the 1870-1871 Franco-German War to finish the artillery assigned to the 25th (Grand Ducal Hessian) Division of the Prussian IX Armeekorps.  These are the last three of the six batteries of that division.

The 3rd Light Battery, part of the 2nd Abteilung, consists of three Ral Partha Krupp guns and six Castaway Arts gunners.  Its two companion batteries in the 2nd Abteilung are the 1st Light and 2nd Light.
Now all I have to do to complete the 25th Division is paint five battalions of infantry (four musketeer and one jager) [120 figures plus a two-man brigade command group and two mounted regimental colonels] and two regiments of cavalry [32 dragoons and a two-man brigade command group].  That's only 195 human and horse figures.  Peace of cake, right!
That doesn't consider three more batteries of artillery (two Prussian and one French), five battalions of infantry (French), and ten regiments of cavalry (five Prussian and five French) plus assorted command figures.  That's only 668 individual humans, horses, and guns, including the above unpainted Hessians.
Oh well, just like eating an elephant -- one bite at a time!

As I stated in my previous post, this was a massive game with 25 units per side.  This particular battle was the one of the largest tank actions in modern history.  Some say the largest but others, including historian David Glantz, say it was the Battle of Brody in 1941.

Anyway, it was the largest one we've fought.  The German 2nd SS Panzer Korps had (or would have had if we would have counted properly) 48 armored vehicles and 44 infantry stands [92 in 14 armored and 11 infantry units].  The Soviet 5th Guards Tank Army had 47 armored vehicles, 32 infantry stands, and 4 artillery stands [83 in 15 armored, 8 infantry, and 2 artillery units].  As an interesting note, the 5th Guards Tank  Army went on to increase its stature and ended up as one of the Soviet armies in the Belorussian Military District where it formed part of the strategic second echelon armies against NATO forces in western Germany during the Cold War.

Now on to the battle.  There were six of us which just the right number as the Memoir 44 board is divided into three sections -- left, center, and right.  Jay (Lord Sterling), Ed, and Steve started out with the Germans while Mark, Phil, and I had the Soviets.  Jay and I were the two overall commanders who got to hand out the action cards.  In the 'Overlord' version, each side can play up to three cards per turn and at the end of each turn draws two replacement cards as long as your "hand" doesn't exceed your starting number, which for this scenario was ten each.  Victory was measured in units killed with 12 being the magic number.

I only took four pictures at the start of the first game, but they will give you a good appreciation of the games.  We played in my church's library on a table that is 10' long and 4' wide, which was just about perfect for the layout.  The two battle mats are from Cigar Box Battle [shameless advertisement] and were printed with 4" hexes.  I've also used these for a large number of Commands & Colors - Medieval battles.

Please click on an image to get a larger picture. 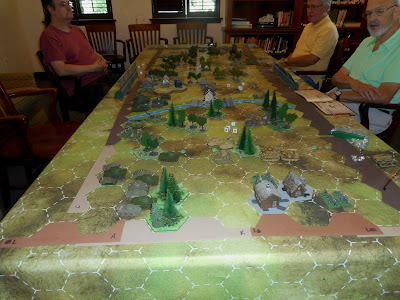 Here is a long view of the entire battlefield.  The Russians are on the left (Where else would they be!) while the Germans on on the right (Undsoweiter for them as well).  As you can see with the Russian tanks in the foreground, there are four 3-tank units with one of them down to only one tank as is the German tank unit directly in front of it.  Prokhorovka is in the middle of the battlefield on the left beyond the stream. 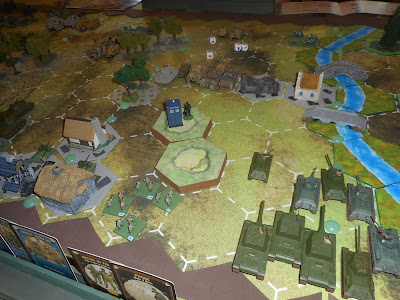 Here we are looking towards the German attack from behind the Russian center.  As you can see, we're using whatever we had available, including armored vehicles that had not even been fielded yet.  Here also you can see the losses.  And some of the cards available to me as the Russian commander.  Plus you'll notice a visitor to the battlefield. 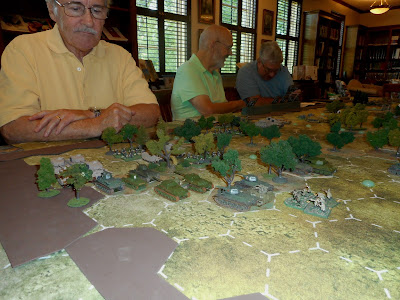 A good view of the German command team with Steve pondering the mass of Soviet tanks bearing down on him while Jay (center) and Ed try to decide who gets what command/combat card. 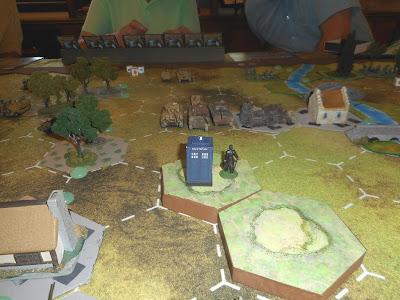 Another shot of the Doctor facing down the German panzers.  But unfortunately for the Soviets he was neutral in the battle.
Things began going downhill swiftly for the Soviets who ended up losing with 5 or 6 victory medals to the 12 that the Germans got to win the first game.
At this point we reset the battlefield, went to lunch (at the Quiznos sandwich shop down the street, and returned, switching sides.  Then Mark, Phil, and I showed that since we lost with the Russians in the first game, we could just as easily lose with the Germans in the second, 12 Soviet victory medals to our 9.  It was a little closer but still no "cigar."
Overall it was a fun game and we plan on doing some more of these 'Overlord' variants, maybe one from the Battle of the Bulge.  There are many. many scenarios for Memoir 44 and all its iterations on the Days of Wonder web site.

Clankety, Clank, I Am a Tank!

My good wargaming buddy Lord Sterling and I, in response to a fellow gamer's request, are running a large Memoir 44 game using 15mm miniatures on Saturday.  The scenario is the tank battle at Prokhorovka (Kursk, July 1943) pitting the German SS Panzer Korps against the Soviet 5th Guards Tank Army.

Then we realized we didn't have enough German armor for the scenario so we ordered two boxes of Flames of War 15mm German tanks (one of Pz-IV H and one of Pz-VIa) from Noble Knight Games.  They had them in the post to us very quickly and they arrived on Tuesday at my house.  I immediately started putting the tanks together.  This was the first time in decades that I've assembled a plastic kit (except for some buildings) so my first two, even following the instructions on the Flames of War web site, were rather slap-dash.  But I quickly got the hang of it, assembling three Pz-IVs and all five Pz-VIs.  I left the other two Pz-IVs to Lord Sterling.

Not having the "right" paint colors, I was forced to improvise, assisted by a Vallejo to Craft Paints conversion chart I had run across several years ago.
Hand painting was too slow as we needed a quick turn-around so I went to a spray paint - Krylon flat camouflage tan.  That seemed to do the trick in representing the elusive German dunkelgelb (dark yellow) basic paint scheme from the factory.
And here are my results.

In addition, I did some detailed painting of the bow machineguns, tracks, and a few other items.  With time being short I did not attempt any camouflage paint addition (a combination of dark olive green and red brown) that the German fieldtroops applied.  My thought was these tanks had just arrived fresh off the train from the factory in Germany and were rushed into the field.  That sounded good to me.
Of course I found out after we had already committed ourselves that the requesting gamer would not be able to come to the game.  Oh well, his loss!
So with this quick diversion from the Franco-German War (1870-1871) to the "Russo-German" War (1943) done, I will gratefully return to the 19th Century to complete several more batteries of Prussian artillery for the IX Armeekorps in 1871.

Posted by ColCampbell50 at 7:31 PM No comments:

Some time ago I obtained these three Prussian gunners (1870-1871) from the estate of a late friend.  AT the time I think I knew who manufactured them, but now I cannot recall.  I thought they were Helion (now Northstar) figures but upon looking at the current Northstar web site, these poses to not match anything being produced by Nic.

I seek the "Hive's" help.  Please click on the picture for a larger image.

The three figures in the center are the ones I need help on identification.  On picture right is a Foundry officer and on picture left is a Castaway Arts officer for comparison.
Any help in identifying the three middle figures would be greatly appreciated.
Thanks,
Jim
EDIT:  I also posted this on The Miniatures Page and received a quick answer.  They are 1866 Prussian gunners from the Eagles of Empire range that is available from North Star Miniatures in the UK.

The Fabrik Eisenmuhlen has been busy these past weeks turning out artillery for the German forces.  Three more batteries of artillery have joined or rejoined the Prussian IX Armeekorps, two Prussian and one Hessian.

Please click on each image to view a larger picture.

The two Prussian batteries are each composed of three Old Glory Krupp guns and six Foundry gunners.  I painted and assembled the guns but the gunners were bought already painted.

In addition, the 1st Hessian Heavy Battery has been 'upgunned' with two of its older, non-standard guns exchanged for two 'vintage' Falcon Krupp guns.  The gunners are 'vintage' Scruby 1" figures that I bought already painted.
The German army at this time was well equipped with artillery.  My rendition of the Prussian IX Armeekorps will eventually have sixteen batteries of artillery, against the French 15th Loire Corps with only eleven batteries (three heavy, four light, one horse, and three Mitrailleuse).  That is not unusual as the German forces normally had much more artillery than did the French and employed it much better than the French.  That helped to make up for the difference in effective ranges between the German Dreyse 'needlegun' rifles and the French Chassepot rifles.

As I related in an earlier post, the French only lack their horse battery which needs three guns and five gunners, the officer already being available.

Well, now on to getting the three Hessian batteries completed.

Posted by ColCampbell50 at 2:04 PM No comments: