I've had some old Scruby generic American Revolution light dragoons for a loooong time now, meaning to paint them as the mounted arm of the Loyalist regiment the Queen's Rangers. But it has been a project on the very back burner. Until now, that is. In trying to get enough troops together for my wargaming group's introduction to Bill Protz's La Bataille de l'Ancien Regime rules, I've had to draft units from my American Revolution forces. And this served as a catalyst to get these cavalry painted.

The Cavalry of the Queen's Rangers
with Major Simcoe on the left (round base)
This light dragoon squadron (paid for by Brittania) will join the light forces in the advanced guard of the Electorishe Armee Thuringia as it defends the Margraviate of Carpania from the despoilations of the Reichsarmeeabteilung Obere Sachsen. The battle will be taking place on Saturday, September 19, 1759/2009.

For those of you who are not familiar with Scruby figures, they were designed and marketed in the 1960s through the 1980s by that doyen of the American wargaming scene - Jack Scruby. The sculpting is very minimal and much of the detail, such as belting, has to be painted onto the figure. They are what some of us refer to as "true 25mm" figures and as such are smaller than the current day's figures such as Foundry, Front Rank, etc. But they are still nice little figures and serve to bulk out my mid 1700s forces until I can get more of the :lead mountain" painted and mounted. Then these guys will revert back to being an American Revolution unit.

P.S. Since these are generic light dragoons, they probably bear little to no resemblance to the actual cavalry of the Queen's Rangers, but that's OK with me. :^)
Posted by ColCampbell50 at 8:23 AM 2 comments:

Joining the ranks of the imagi-nations of Europa will be the County of Hesse-Coburg. This small state is aligned with the ranks of the Elector and is a close ally of the Margraviate of Carpania. The current ruler is Graf Karl von Hesse-Coburg. He is a cousin of King Friedrich of . His army follows the organization and uniforms of the . Eventually it should have six infantry regiments (each of 24 figures), a grenadier battalion (of 36 figures), a cuirassier regiment (24 figures), a dragoon regiment (24 figures), artillery, and light troops.

I've begun to acquire a small number of Miniature Figurines Seven Years War Prussian figures. Looking for a way to use them in my imagi-nation setting, I have finally decided to create this new statelet. Initially its army will be small, just an adjunct to the army of the Margraviate of Carpania. I will base the uniforms of those of Hesse-Kassel so that they can also be used as Hessians in my American Revolution forces. The flags will be those of Hesse-Kassel as well, courtesy of the WarFlag web site for the infantry and the Project SYW site for the cavalry.

Of course I don't know how long it will take me to acquire and paint all the troops, considering I'm still painting the forces of Carpania, Courland, Brittania, Gallia, and the Reichsarmee. But its progress will be documented here as it occurs.

I'm continuing to work on the minimum necessary force levels for my "Big Battalions" game next month. Joining the Electoral and Imperial armies are two small troops of light cavalry. These are actually American Revolution era cavalry and were acquired for my AMR forces but they are being pressed into service for my fictitious Seven Years War campaigning. All of these figures are "true" 25mm and will eventually revert to my AMR forces once I get more 28mm figures painted for my imagi-nation forces. 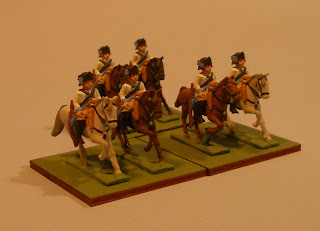 First up is a troop of six light dragoons for the Imperial Army. These Mini Figs light dragoons are painted in the uniforms of Colonel William Washington's Regiment of Dragoons of the Continental Army. But for my "Big Battalions" game, they will be part of a converged light dragoon squadron (along with eight other Mini Figs) from the Kreis Obere Sachsen and join the Armeeabteilung Obere Sachsen's advanced guard along with Courland's Tamnii Narod Pandours and Timofievich Cossacks. 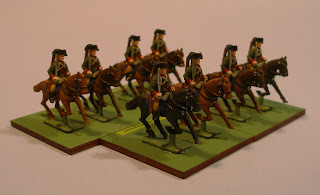 Joining the Electoral Army is a small squadron of eight mounted jagers provided by contract to the Brittanian army. They will be traveling to Carpania along with the Brittanian contingent commanded by Colonel Ashley Hyde-Enseecker. These figures are old Custom Cast dragoons and are painted as the fictitious Loyalist York Dragoons for my AMR British forces. Two of the have been painted for several years and the other six have just joined them. Unlike the Mini Figs above, these are one-piece castings but were fairly easy to paint. 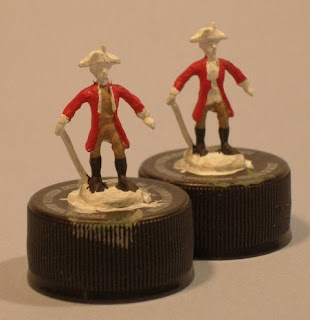 And finally here are two Scruby infantry officers who are being painted to replace two plastic officers in my British converged light infantry battalions. These are fairly generic tricorne wearing officers. They should be finished in another day or two.

Once they are completed then I only have twelve more light dragoons left to paint before my minimum force levels are reached. These last ones are also Scrubys and will represent the cavalry arm of the Queen's Rangers, joining the 20 infantry figures I already have painted. There will also be a mounted officer added to command this combined arms legion for the British (err, Brittanians).
Posted by ColCampbell50 at 12:37 PM 2 comments:

My painting in July hasn't been as productive as I had hoped, only 27 foot figures. But 2/3 of them were RSM95 figures which were a joy to paint. As usual, please click on the pictures to see a larger image.

The RSM95 figures are now the Infanterie Battalion Eisenmuhlen of the Barony of Eisenmuhlen, which is allied to the Margraviate of Carpania. The figures are actually American Revolution British but since the uniform cut is close to what the Germanians (Prussians) wear and Carpania and Eisenmuhlen are allied to Germania, I figured that these would be "close enough" for an imagi-nation force. They wear dark cherry red coats with camel facings, small clothes, and breeches. Their gaiters are charcoal and their black tricornes are trimmed in yellow tape. The flags use the same color scheme (red/yellow) and are very simple in design (and are home produced).

In addition to the 24 RSM95 figures, I also painted 12 old Custom Cast British infantry who will serve double duty as American Revolutionary War British and Imagi-Nation Brittanians. The figures are organized as the 38th Regiment of Foot and can be paired with the 80th Regiment of Foot (painted a number of years ago) to make a 24 figure strong battalion for Batailles de l'Ancien Regime rules use.

The last foot figure (not pictured) was an officer for my American Revolution Queen's Rangers infantry.

And while I was experimenting with using the Warflag flags to spruce up my British battalions I also decided to see how easy it would be to temporarily modify some of my American Continental battalions so that I could use them in my BAR big battalions game in September. I needed four battalions of Reichsarmee troops for the Armee Abteilung Kreis Obere Sachsen. Again I used Warflag flags, this time extra Hessian ones. 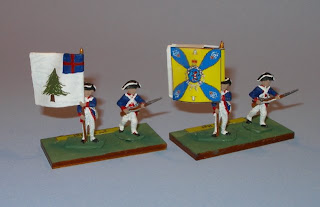 You can look for these and others in my reports next month about the coming battle between the Electoral Army (Brittania, Carpania, and Eisenmuhlen) and the Reichsarmee (Courland, Sachsen-Wachsenstein, and the Kreis Obere Sachsen).
Posted by ColCampbell50 at 3:00 PM 2 comments:

Update on the "Trailer Cats"

Well it appears that my "trailer cats" have moved on to a better, and probably drier, abode. I haven't seen momma cat or her kittens since Sunday last. With all the rain we have had this past week (and some of the rain storms have been "stump movin' gulley washers"), I'm sure she has moved her litter to a drier place. Now I don't have to worry about trying to catch them to get them to the local animal rescue league.
Posted by ColCampbell50 at 2:57 PM No comments: