It has been over a month since I've posted anything, which is not really unusual.  Various non-gaming related events have "interfered" with my gaming activities.  But I have been working on several gaming items.  One being obtaining a copy of the 2nd edition of Dan Mersey's "Lion Rampant" medieval rules.  After reading through the rules and digesting the changes, I said, "Self, we need to have a medieval game."  So I dug out my vintage 25mm Medieval troops and started planning.

After updating my "retinue" list (now a "warband" list) from our last games back in 2015, I planned on what I needed to do to bring some of the units up to date.  Many of my units have gone from washers (infantry) and rectangular metal bases (cavalry) to hexagonal bases, but not all.  I did that to differentiate my Medieval units from those of Lord Sterling who has the Kingdom of Parallelogram and the Kingdom of Circumference.  I decided in the Duchy of Hexagonal, although I called it the Duchy of Bentwood.

Please click on a picture for a larger image.

So here are the first eight Warbands (each of 24 points), first the forces loyal to Duke William Worthington:

With these warbands, I designed a small game for our Thursday "Old Guys" Group.  It pitted three loyal warbands against three rebel warbands using the "Bloodbath" scenario from the rule book.  Each warband was 'balanced' with one heavy cavalry unit, one heavy infantry unit, and one missile unit.  It was an interesting game with all the players either getting introduced or re-introduced to the rules.

I have a larger game scheduled for my wargaming group on Saturday.

Posted by ColCampbell50 at 4:14 PM No comments:

While painting on a unit of Pushtun infantry, I decided to use an extra Old Glory figure to make the ruler of my little imaginary princedom, Kashgar in the vale of Khalaam.  And so I present, the Rajah of Kashgar.

The Rajah is from the Old Glory CNP-01, Pathan Command pack while the Rani and Lal Singh are Pulp Figures and were featured on previous blog postings.
Now back to the Pushtuns.

Our group gathered at a friend's house on Saturday, 6 August, for a naval wargame.  We used my 1:2400 scale Russian and Japanese Panzerschiffe ships on a Cigar Box battle mat with David Manley's "White Bear, Red Sun" rules.

The action was a "what if" scenario between the Russian Pacific Fleet based in Port Arthur and the Japanese Combined Fleet.

The orders of battle were:

All six commands started out in line ahead formation and sailed toward the enemy.  We join the action in progress (I forgot to start taking pictures until several turns into game.).  "North" is to the top of all the pictures.  Please click on a picture for a  larger image.


This ended the battle as darkness began to fall allowing the Russian ships to escape back to Port Arthur.  The Japanese sank a Russian battleship and a protected cruiser while loosing two armored cruisers of their own.
Everyone had a good time and my pre-dreadnoughts saw action for the first time in over four years.
Posted by ColCampbell50 at 4:54 PM 1 comment:

And Thugees Join the Cast!

After painting Russians, British, and Indians, it was time to get working on some enemies for them.  Enter a 16-figure unit of Indian thugees (or ill-costumed very irregular tribal warriors).  All but one are Bob Murch's Pulp Figures from packs PBT-22, 23 and 27.  The better costumed leader is a figure that I've had for many a year.  Until I needed a leader figure for these guys, he was a my pirate box.  But with such a nice turban, sword, and musket, I knew he really belonged in the 19th Century Northwest Frontier fighting against the forces of the Raj.

These figures can be used in a number of roles, both fighting for and against the Raj or defending their village against marauders.

Now on to more "enemies" of the Raj - Pathans!

Labels: Aooghastan, The Men Who Would Be Kings rules, Thugees, Victorian Colonial

Regaining my stamina after a mild bout with Covid, I finished painting and basing my second company of Indian Army Corps of Guides.  Lead by their stolid havildar, these stalwart soldiers will bring glory to the Raj.  See the post on the 1st Company for details about the Guides service.

While preparing these figures for painting I noticed that one of them was missing part of his base, the part beneath his left foot.  Contemplating trouble with stability and the possibility of a broken ankle, I found a small rock in my "bag of rocks" that could be used to provide the figure with a stable footing. 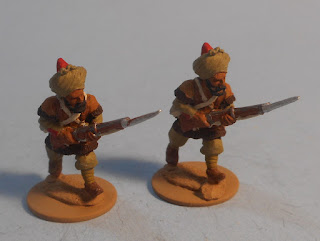 On your left is a figure with a completely cast base and on your right is the incomplete figure with its added rock for stability.  If you'll look carefully in the first picture, this 'rocky' fellow is on the far left in the front row.

Now on to a unit of "Thuggees" who will be some opponents to the forces of the Raj.

Posted by ColCampbell50 at 2:22 PM No comments:

Labels: Aooghastan, Indian Army, The Men Who Would Be Kings rules, Victorian Colonial

After a number of years of on and off (but mainly off) painting, I've finally finished a batch of various terrain pieces for my 25mm forces.  Many of these can be used in various genres while a couple are only common to the Victorian/Edwardian colonial era.  So here they are ---


So these now join my other bits and bobs of terrain pieces that will enhance an otherwise drab battlefield.
The figures are some of my just recently painted Indian Army Corps of Guides (see previous post).

Posted by ColCampbell50 at 9:40 PM No comments:

The Indian Army Corps of Guides was raised in 1846 to serve on the Northwest Frontier.  It quickly developed as one of the elite units of the Indian Army.  It was composed of both Hindu and Moslem troops.  In 1947, upon the partition of India and Pakistan, the Corps was assigned to the Pakistani Army and still exists as the 2nd Battalion (The Guides) of the Frontier Force Regiment.

This unit is composed of Foundry figures from NW014 and NW021.  Unfortunately Foundry had them all sculpted with full beards so this unit (and its #2, still being painted) will be all Hindu.

I think this is one of the most distinctive group of figures that I've painted.  The contrasts of browns and tans set off by the red "cap" and cuff markings make the entire uniform stand out.

Posted by ColCampbell50 at 8:24 PM No comments: