Last week I posted a picture of the two Prussian light batteries that I was preparing for my Chassepot and Needlegun Franco-German War game at the Colonial Barracks convention in November.  Over the weekend I completed the two batteries.


These two batteries will be in support of the 11th Brandenburg Infantry Brigade, 6th Brandenburg Division in the upcoming game.  The Prussians are hoping that with their superior range and more effective shell fuses these guns will bring victory the the nascent Reich.
Posted by ColCampbell50 at 12:47 PM 1 comment:

The Brom's Colonial Barracks convention is the first weekend in November.  This year they have expanded it from just The Sword and the Flame rules and variants to any rules written by Larry Brom.

I am gathering troops to run a Franco-German War (AKA Franco-Prussian War) battle using Larry's Chassepot and Needlegun rules.  It will feature troops owned and painted by my buddies Lord Sterling and Doc Ord as well as mine.  But the Germans are a little short on artillery so I've been painting two batteries of Prussian light artillery (4-lbrs). 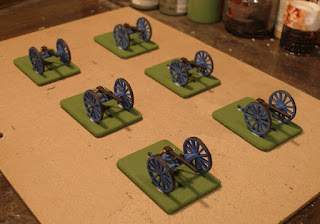 These six guns are really Ral Partha Colonial Egyptian Krupp guns.  But they are Krupps!  Each battery is represented by three guns and six gunners.  I've just glued the guns to the bases and will add the already painted gunners (Castaway Arts) once the glue dries.  The gunners are coming from some "heavier" Prussian guns that will be re-purposed as Prussian heavy 6-lbr guns, with new gunners also from Castaway Arts.

I've also got two batteries of French 8-lbr breech-loaders in progress.  Since my French force is loosely based on the Army of the Loire which fought the Germans south of Paris after the main French armies were defeated, I've taken the liberty of arming them with the newly developed 8-lbr breech-loader designed by de Reffye (link).  Unfortunately no one makes such a model so I'm using American Civil War 12-lb Napoleon gun-howitzers.  The carriage and barrel are close-enough for my purposes as I'm not too much of a stickler.  I'll post some pictures later.
Posted by ColCampbell50 at 7:53 PM No comments:

Just before the end of July, I completed the unit of 17 Baluchi mercenaries that I acquired from Ken H. at Bayou Wars.  They were the last of my Bayou Wars purchased figures to be painted.  I think that this is the first time that I have completely painted all of a convention's figures within such a short period of time (about seven weeks!).  But let's get on with introducing them.  As I stated in my last post on July 5 (Was it really that long ago?!), they are armed with matchlock muskets but also have swords and shields.  They should have an advantage in melees, but they'll have to drop those muskets in order to fully utilize their close combat weapons.  EDIT:  These figures are 28mm from Foundry's Darkest Africa line.

They are organized for Larry Brom's  The Sword in Africa rules (a small unit variant of The Sword and the Flame rules).  Each unit is 8 figures, including a leader and every two to three "native" units has a senior leader.

With the exception of a new armed leader for my main Zanzabari unit, these Baluchis will complete my "Zanzabari" command for The Sword in Africa forces that I have been raising.  Although they are not as well armed as the rest of the Zanzabari command, they will, I'm sure, acquit themselves well.  My Zanzabari command now has two 8-man units of heavily-armed Zanzabaris, one 8-man unit of musket armed Zanzabaris, two 8-man units of Ruga-Ruga (mercenary "bandits"), these two units of Baluchi mercenaries, and an old muzzle loading cannon with a 4-man crew.
Posted by ColCampbell50 at 7:15 PM 1 comment: