Flash from the Past

I just ran across this photo showing an early wargame (circa 1972) being played in the wing of my parents house in which my two brothers and I grew up. It is a Napoleonic battle using Scruby, MiniFigs, and Airfix figures and our group's homegrown house rules, with 30-40 man infantry battalions and 30-50 man cavalry regiments.

Like many others have done (and will do), I have translated my interest in the Seven Years War into an alternate reality - using fictional countries as a backdrop for battles during this period. So far I've painted and mounted troops for two of them - the Margraviate of Carpania (ruled by Markgraf Friedrich Hapnich) which uses Prussian troops, uniforms, and flags, and the Duchy of Courland (ruled by Duke Yakov Alexandrovich Pavlov) which uses Russian troops, uniforms, and flags. Other fictional countries for which I have unpainted troops will be the Duchy of Grand Fenwick (British), Principality of Concordia (French), Principality of Campostella (Spanish), Duchy of Sachsen-Wachsenstein (Saxon), and Duchy of Friezland (Hanoverian). All these imaginary countries will be located in the similarly imaginary Kreis of Mittleland (which will occupy the same area as Thuringia in central Germany).

For those of you who are steeped in the names of imaginary movie countries, I'm sure you'll recognize several of the names, especially the Duchy of Grand Fenwick (from The Mouse That Roared) and the Markgraviate of Carpania (from The Great Race).
Here are some pictures of the units I have so far. The first four are from the Margraviate of Carpania and the last is from the Duchy of Courland. 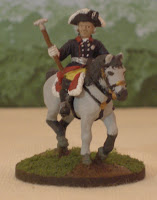 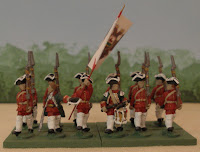 Although these units are ready for gaming, I still have some more work to do on them, such as completing the terraining of the bases and doing some detailed touch-up of the figures.