And on the last day of the year 2018, I'm posting the completion of the 2nd wave of the Gallian Regiment Royal Ecossais.  These figures have been waiting for four years to be completely outfitted.

These are from Old Glory's Jacobite range.  The flag they are carrying is the colonel's "white" flag blazoned with the Scottish thistle and French fleur de lis.  They join their compatriots of the "First Wave."  There will be a "Third Wave" next year as I outfit the grenadier company and the picquet company.

The complete regiment will see their first action on Saturday, January 19, 2019, as part of the Gallian contingent to the Imperial Armeeabteilung Kreis Obere-Sachsen.

I hope that everyone had a blessed and merry Christmas and that you will have a prosperous new year!

Posted by ColCampbell50 at 3:46 PM No comments:

A Great War Miniatures WW1 British artillery crew for my British 18-lbr I obtained several years ago which will be part of my Very British Civil War gaming.

Also for VBCW, a Warlord improvised armored car, the "Malcom-Campbell" which I just had to add as those are my two middle names! 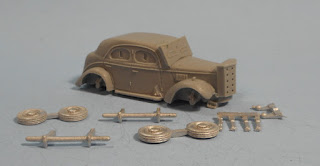 It has a resin body and white metal wheels, bumpers, and half-rifles.  This will be a nice little addition to my VBCW forces.

And two books - The Komnene Dynasty, Byzantium's Struggle for Survival: 1057-1185 by John Carr and A Battlefield Atlas of the American Revolution by Craig L. Symonds.  Both should make interesting reading.

I've not completed as much painting this month as I wanted, mainly due to a nagging cough from a month-long flare up of my allergic rhinitis.  It has robbed me of my stamina later in the day.  I did remount some pre-painted 25mm MiniFig Wurttemburg troops (a battalion of line infantry and a battalion of light infantry) as well as painted a few figures to complete their organization.  they were used in a fictional 1813 battle preceding Leipzig that pitted a retreating French force and their pursuing Prussians.

As a result of that game, I spent several days going through my 25mm Napoleonic French and Prussian forces and laying out a schema of painting next year to try and complete some of the commands.  As part of that inventory I redid my Napoleon command group by removing a mounted escort (needed him elsewhere), changing Napoleon's horse (also needed elsewhere), and adding two Old Guard escorts (who were extra figures).  The result: 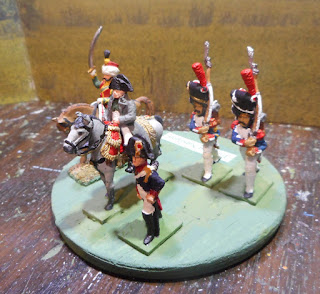 Napoleon, with his faithful Mameluke Roustam, an ADc on foot, and a sergeant and grenadier of the Old Guard keeping close watch.  All of the figures are Miniature Figurines except Roustam's horse which is a Warrior figure.  Roustam himself is an earlier MiniFig casting while all the others are later MiniFigs castings.

I'm still hoping to get 24 more Royal Ecossais figures completed by the 31st.  If so, I'll make them my last post of the year.

Here's hoping everyone had a blessed and merry Christmas and will have a prosperous New Year!

I'm trying to identify the manufacturer of these Napoleonic (I think) figures.  They are "true" 25mm figures cast in lead, not pewter.  I got the group of three officers and 16 soldiers a number of years ago but as far as I can recall the seller didn't know the manufacturer.

Thanks to the help I received on TMP, I went looking for the Frontier Miniatures line.  Now evidently out of production, I did find some "no longer in stock" groups of Frontier figures on the Noble Knight Games site.  Once I looked at the pictures, I realized this is where I procured them.  And as others guessed, they do appear to be Crimean War figures.  But I'll probably still use them as Prussian landwehr.

Thanks to everyone who helped over on TMP!!


I think both figures are Napoleonic Prussian landwehr.  Both have the letters "CW" and a number [3 for the officer and 11 for the soldier] engraved on the bottom.

Any help would be appreciated since I'd like to get some more if they are still available.