Here are some of the pictures I took during the game I ran several Saturdays ago.  It pitted a punitive expedition of two Britannian battalions and some rangers and militia against a regular Andalusian (imagi-Spanish) force of regular battalions, militia, and Indians.  All of the regular battalions on both sides and the Andalusian gun and crew are owned by Doc Ord who has generously granted me a long-term loan of them.  The militia, rangers, and Indians are owned and painted by me, as was all the terrain.  Please click on the pictures for a larger image.  [Added note:  Additional pictures can be found at the Jackson Gamers blog.]

The battle area with a clearing for the Andalusian fort in the left foreground and the allied Indian stockaded village in the right background.

A closer look at the fort clearing showing the temporary breastworks manned by a company of Andalusian militia. 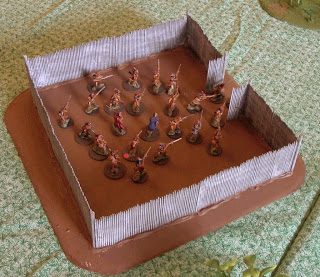 The stockaded Indian village.  This stockade was originally built as a Zulu kraal for a Victorian colonial game three years ago.  It is manned by Old Glory Indians. 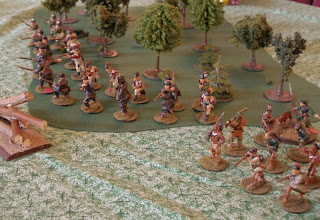 A mixed bag of Britannian rangers, light infantry, and Indians advance toward the fort clearing.  These figures are Redoubt, Foundry, Conquest, and one unknown manufacturer. 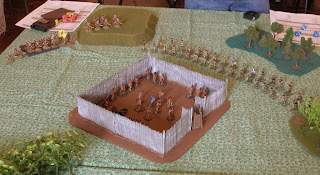 The stockade is being assaulted by a battalion of Britannian infantry and two companies of Georgiana militia. 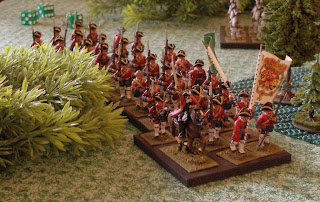 One of three battalions of Andalusian reinforcements marches toward the fighting.  This battalion is from the Regiment Ibernia.

Two more Andalusian battalions marching forward.  You might recognize the mounted officer in the foreground as Feldmarshall Leutnant Freiherr Bernard von Alderheim of the Imperium.  He was pressed into service as the Andalusian senior commander, Baron de la Plata (played by my friend, Lord Sterling). 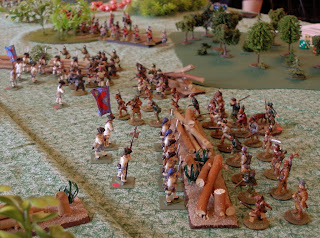 The Britannian rangers and light infantry assault the Andalusian militia behind their temporary breastworks.  The Andalusians probably wisely decided not the stand and began to withdraw upon their regular supports (the Battalion Ibernia). 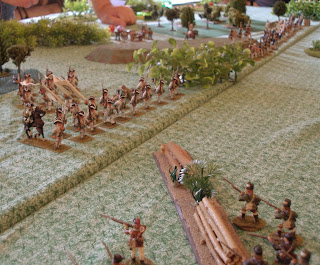 Meanwhile the center Andalusian battalion begins to deploy against some of the rangers and light infantry.

But they are quickly reinforced by the second of the Britannian battalions and a fire fight results. 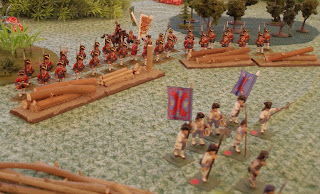 The Andalusian militia continue to fall back on their supports who now line the reverse of the breastworks at the rear of the clearing.

The Andalusian gun, cheered on by de la Plata, comes into action.  The two gunners are borrowed Imperium figures who are assisted by infantrymen from two different Andalusian battalions.

Even though the battalion commander has been slain, the left flank Andalusian battalion holds its own against both the Britannian regulars to the left of the fort and some of the Georgiana militia (out of the picture to the right).
The final tally saw the Britannian and 'Muricans withdrawing from their attack after suffering severe casualties from the Andalusian and Indian fire.  Another battle is in the offing -- probably an Andalusian assault against the southern most Britannian outpost which now shelters the survivors of this battle.
Posted by ColCampbell50 at 1:27 PM 3 comments:

I ran my first imagi-"FIW" game today.  It took place along the border between the Britannian colony of Georgiana and the Capitania General de Florida.  I completed this group of figures of six American Woodland Indians just before the game.

These figures are pack Woodland Indians B from Conquest Miniatures 500 Nations line.  As with the other Conquest figures, they were a joy to paint.  They joined six Iroquois Indians (pack Iroquois Warriors B), that I had painted sometime earlier, as part of the Britannian punitive expedition.  More on the battle at a later posting.

I also prepared ten sections of temporary breastworks for the Asturian (AKA Spanish) troops to shelter behind.  These breastworks were inspired by the blog of Little Fritz - Der Kriegshund (link to posting).  They were made from sections of 2" x 4" cast-offs after the edges were ripped to a smaller dimension.  I cut the strips into 4" sections, glued on pieces of dried branches, and then added white glue and sand to give them some ground texture.  I also added some plastic plants to some of the sections.  The following pictures show some of the sections being used in today's game. 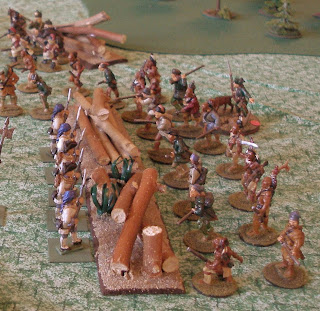 I still have some more work to do on these terrain pieces, such as improving the look of the "ground" and adding some additional foliage.
As usual, please click on the pictures for a larger image.
Posted by ColCampbell50 at 8:37 PM 3 comments:

After painting 36 "Murican" colonial militia, I switches sides and have begun painting 33 figures for two companies of the Compagnies Gallien de la Marine.  As most of my readers know, these troops were raised in Metropolitan Gallia for deployment to various Gallian colonies.  Since almost all the overseas colonies were under the control of the Ministry of Marine (the Navy ministry), these "Army" troops were also controlled thusly. 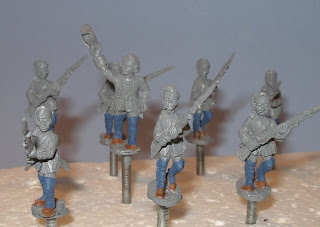 With the exception of the officer waving his hat, these are Old Glory figures from their French and Indian War line, pack FIW-22, Compagnies Franches de la Marine.  These are all in a variety of advancing poses. Half of them have knapsacks and half don't, which made it easy to divide them into two 15-figure companies.  I added three officers from the Dayton Painting Consortium's Spanish line (formerly of the London Warroom) so I'll have a battalion commander (the one waving his hat) and two company commanders (carrying muskets).  More of these later as they progress in their fitting out.  I'm hoping to have them completed by my first Capitania General de la Florida game on July 17.
Posted by ColCampbell50 at 7:49 PM 1 comment:

The other day I completed the outfitting of the Georgiana Militia Company No. 2 and they were mustered into Brittanian service today.  As I stated in a previous post about Company No. 1 (link), they are dressed in darker colors - dark brown, dark green, black, and charcoal.  [As usual, please click on the pictures for a larger image.]

Here is the entire company - one officer, one sergeant, one drummer, and fifteen other ranks. 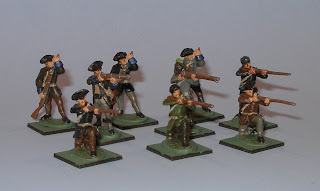 The "firing line" half of the company.

The "advancing" half of the company.
This RSM-95 American militia 36-figure pack I purchased consisted of two officers, two drummers, 19 "firing line" figures, and 13 "advancing" figures.  I considered making one company all firing line poses and the other advancing poses, but in the end decided on the division you see above and in the previous post.
They will join two 24 figure battalions of Brittanian foot (borrowed from my friend Doc Ord) and an advanced guard (see these previous posts - link and link) as a Brittanian expedition into the northeastern corner of the Capitania General de la Florida to take possession of the post at Fernandina before it can be occupied and developed by the Espagnians and used as a base against the colony of Georgiana.  The battle is scheduled to be conducted on Saturday, July 17.
Posted by ColCampbell50 at 7:43 PM No comments: