Between the Wars British - Part 2

Continuing my short break from painting mid 1700s figures, I finished the basic painting on ten British riflemen and two heavy machinegun teams yesterday.  The riflemen will be joined by their officer and Lewis gunner (pictured in the previous post) to form a 12-figure section usable for either The Sword to Adventure or I Ain't Been Shot, Mum rules in future pulp fiction action with the Jackson gamers. 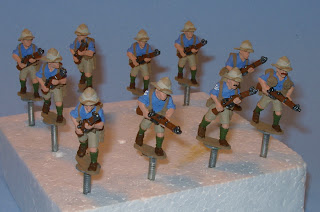 The 1st Rifle Section of the British Flying Column decked out for action in their "grayback" drill shirts.  Notice the assistant Lewis gunner on the front right corner carrying extra ammunition drums slung two on his chest and two on his back.  Unfortunately the Copplestone set only came with one of these lads  so my other two Lewis gun assistants will not be so accoutremented (Is that a real word?). 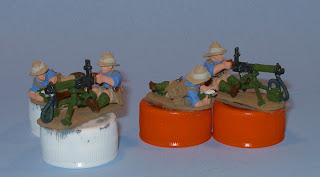 The two Vickers .303 heavy machinegun teams.  With their section sergeant (pictured in the previous post), they will provide some critical fire support to the rifle sections of the British Flying Column.

Besides the Rolls Royce armoured car, HMAC Ajax (pictured in previous post), the British Flying Column will rely on these three Crossley carriers for getting around the operational area.  A local Euopean guide is posed next to them for scale.  I have one more vehicle to paint, a Rolls Royce Silver Ghost, for the column command car.
And in other news, Col Campbell's Barracks was mentioned by Murphy on the Bongolesia blog as one of his inspirations.  You can read the news of Murphy's recent receipt of the Stylish Blogger Award and the mention of Col Campbell's Barracks, among other even more outstanding blogs, here:  bongolesia.blogspot.com/2011/04/winner-of-stylish-blogger-award.html  Murphy is a good writer and really, in my opinion, captures the romance and inaneness of "banana republics" all over the globe.  We should all be so gifted!
The officers and soldiers of the various troops stationed at Col Campbell's Barracks are all aquiver about this mention by the nation of Bongolesia, especially since President for Life Phat Daddee B'wonah is so fulsome in his praise of European colonial masters.
Of course this is just good ole jossing around among the "good ole boys" and we are pleased as punch that Murphy has such a high opinion of our little endeavors here.
Posted by ColCampbell50 at 2:50 PM 2 comments:

Labels: Back of Beyond, British, Copplestone, infantry, machineguns, vehicles

Between the Wars British

Several years ago I took advantage of a sale by Copplestone Miniatures and ordered a batch of his Between the Wars (Back of Beyond) British infantry.  After a pulp fiction game several weeks ago, I was envigorated to start painting them.  Although my organization is for The Sword to Adventure, a variant of The Sword and the Flame, it is also applicable for the rules we used in the pulp fiction game, I Ain't Been Shot, Mum by Two Fat Lardies.

So here is the start of the British force:  four officers (force commander and three section leaders), the force color sergeant, the machinegun section sergeant, and Lewis gunners for each rifle section. 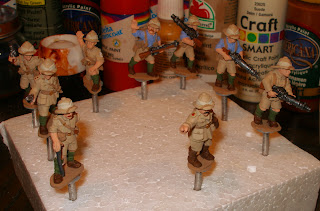 The force commander, a major, is front center with the three rifle section leaders arrayed to his right and the three Lewis gunners to his left.  The machinegun section sergeant (kneeling with arm raised) and the force color sergeant (holding rifle) are to the rear.
I have completed the painting but haven't applied the Future sealant, the wash, or the matte glaze. 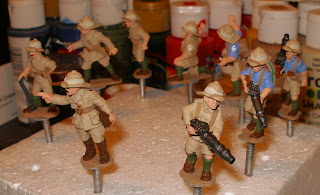 Here is another angle.  I dotted in the officer rank insignia on the shoulder straps -- a crown for the major and the appropriate number of crosses (or pips) for the captain, 1st leftenant, and 2nd leftenant.  The two sergeants got their rank insignia painted on their left upper arms.  I don't know if the British wore their sergeant's rank insignia on their drill (or "greyback") shirts, but mine will!
Additional figures to be painted will be two British rifle sections, each of a sergeant, a corporal, seven riflemen, and a Lewis gun loader; a Ghurkha rifle section (same composition); and a  heavy machinegun section with two Vickers .303 watercooled machineguns, each with a gunner and a loader.
I found the Copplestone figures very easy to paint, especially since I'm basically a "block" painter and don't try to do layers or shading.  The wash that I apply later will give the figures some additional definition.  They might not look very fancy close up, but they will look very serviceable on the miniature battlefield.

This British command will be teamed with my Rolls Royce armored car (HMAC Ajax) and two (later three) Crossley carriers into a "flying column" for actions anywhere from the sands of Mesopotamia to the plains of the Yellow River.
These figures will be added to about three dozen Chinese infantry of various "flavors" that are already painted (and a Chinese heavy machinegun team and a mortar team still to be painted) as part of my contribution to our pulp fiction/Back of Beyond forces.
Posted by ColCampbell50 at 8:42 PM 2 comments:

Labels: Back of Beyond, British, Copplestone, infantry

The last two divisions of the Regiment Beaujolais have joined and the regiment is now complete. 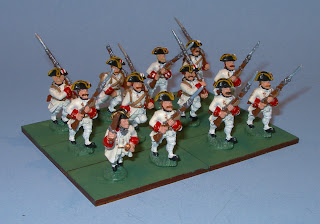 The grenadier division has an officer (front corner with pistol), a sergeant (rear rank with white lace on his cuffs), and ten grenadiers. 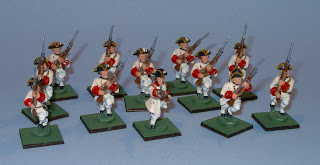 The detachment of picquets also has an officer (center, firing pistol), a sergeant, and ten fusiliers.
The entire regiment has been formally accepted into the service of the Reichsarmeeabteilung Obere-Sachsen in a review by the army commander, Feldzeugmeister Freiherr Bernard von Alderheim, and the Gallian contingent commander,  Marechal-de-camp Francois Lucien, Comte de Merlot. 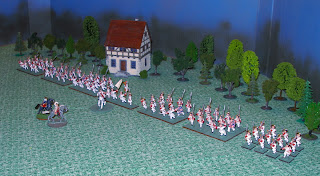 Of course, the first action of these stalwart Gallians will be this Saturday when they are magically transported to 'Murica to provide the backbone for a Gallian expedition against the Britannians and their provincials in the forests of the New World.
Posted by ColCampbell50 at 1:22 PM 2 comments:

The color guard and third and fourth divisions of the Regiment Beaujolais have been equipped and posted to their barracks, joining the first and second divisions and their colonel (see previous post).


The grenadiers and the detachment of picquets are currently being equipped and will join the regiment before they march into action against the Rosbifs next Saturday.
Posted by ColCampbell50 at 3:36 PM 1 comment: