I haven't done a lot of painting so far this month.  I have done a little on a 15mm Confederate brigade for my "On to Richmond!" ACW rules based forces and a little on my special project (more on this once I get it completed).  The one element I completed is an auto-cannon manned by French naval gunners that will be used in my Franco-German War (1870-1871) French Republican forces.
I've had this 'large' Gatling style gun for a number of years as part of a collection of figures I bought.  I think it was manufactured by Falcon Miniatures as the wheel spacing resembled the heavy Krupp guns that I used as Hessian heavy artillery.  The gun carriage was rather wide and looked rather spindly.  So I shortened the axle and glued a reinforcing wire to hold the barrel mechanism.  I had to drill fairly deeply into the bottom of the barrel under the ammunition box, through the center of the gun carriage, and then bend the wire along underneath the trail of the carriage.
After painting, it turned out rather well.  The gun is manned by two Askari Miniatures French naval gunners from the Sailors line.  I bought two 4-figure packs and used six of them for the French naval heavy battery that I included in an earlier blog post. 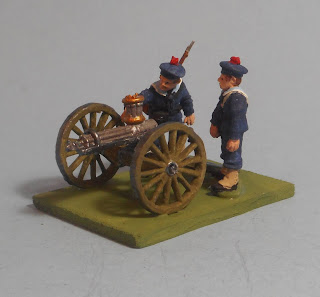 This gun will be included as part of the Naval Heavy Artillery Battery in the 15th Loire Corps artillery.  If need be, I can also use it to support any French naval or land forces conducting operations in the Victorian Colonial period.
Posted by ColCampbell50 at 8:02 PM 1 comment: