WW1 Aerial Combat with a Twist!

This past Thursday our group of five "old guys" met for lunch followed by a game at Steve's house.  I brought my Wings of War/Wings of Glory WW1 biplanes for some afternoon aerial combat over France.  Please click on the pictures for a larger image.
As game master, I developed two fairly similar scenarios set in mid to late 1917.  In the first game, two German light bombers, escorted by two fighters, had to bomb some targets in the British rear area in support of a German offensive.  They were opposed by four British fighters.  In the second game, the roles were reversed and two French light bombers, escorted by two French fighters, had to bomb some targets in the German rear area in support of a French offensive.  They were opposed by four German fighters.
German vs British scenario -- Two Rumpler C IV escorted by two Albatros D III against one Bristol F2B, one SE-5, and two SE-5A.
French vs. German scenario -- Two Breguet BR-14 escorted by two Nieuport 17 against two Albatros D III and two Pfalz D III.
In each scenario, there were six targets randomly aligned across the defenders side of the playing area.  The bombers could choose to bomb just one target with their full load or three different targets with 1/3 loads each.
Game 1:
The Germans divided their aircraft into a bomber and a fighter for each player and chose to bomb single targets.  The British had the F2B and the SE-5 under one player's control and the two SE-5As under the other.  As the second round began, the British planes fly over a massive cloud formation when suddenly out of the clouds came two flying reptiles who were disturbed by the offensive noise of the airplane engines!  They immediately attacked two of the British planes.
The orange flying reptile was shot to pieces fairly quickly (they only had a damage level of 6) before it could cause too much damage to its SE-5A target while the second stayed latched onto its British fighter target (the SE-5). 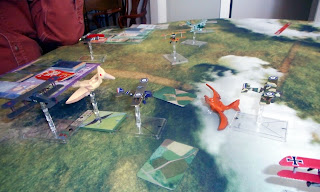 The pilot of that SE-5 tried Immelmann after Immelmann to shake the reptile. but couldn't as his plane came apart under the claws of the beast and both of them fell from the sky.
Germans were able to hit both targets and get their bombers headed for home before the British could seriously intefere.
I had fun controlling the flying reptiles to the initial consternation of the four players.
Game 2:
With the palyers' roles reversed, the British decided on the same organization, one bomber and one fighter per player, while the the Germans each controlled a pair of similar fighters, either two Albratros or two Pfalz. 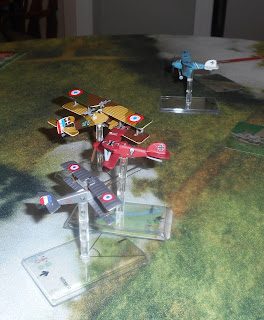 An initial scrum with the red Albatros sliding in between a Breguet and a Nieuport while the blue Albatros wanders around, getting pegged by the Bregeut's forward gun. 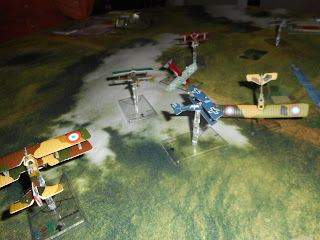 Later in the action both Pfalz and the red Albatros team up to down a Bregeut but the camo winged Pfalz is also shot down by the Bregeut's observer/gunner.
In this game, the French only succeeded in bombing one target with a partial bomb load.
Everyone had fun which was the object of the gaming!
Posted by ColCampbell50 at 10:33 AM