Please click on the pictures for a larger image.

The other British that I have completed are a few senior command figures, a rifle section, and a heavy mortar section. 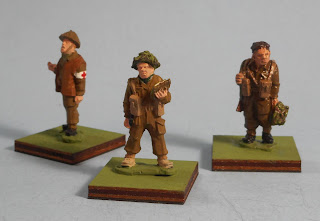 The senior command figures are Captain Campbell (center) armed with a Sten gun, Color Sergeant Gilmore (right), and an aidman (left) from the battalion support group.

The First Section is similar in composition to the Second, with a sergeant (center), a five man maneuver section (right), and a four-man fire support element (left). 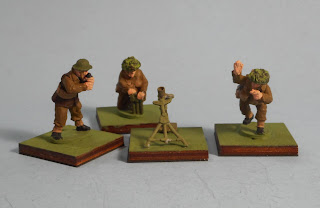 Immediate fire support is provided by a ML 3-inch mortar with its three-man crew.  The mortar was actually 3.209-inch (81mm) and by 1943 was comparable to the German 81mm mortar.

I'm still working on a platoon commander and his sergeant, a 2" mortar team (2 figures), a .303 Vickers machinegun team (3 figures), and a spotter.  After I get them completed, I'll go back to the Germans to complete their heavy MG 42 machinegun team and 81mm mortar team.
Posted by ColCampbell50 at 3:22 PM