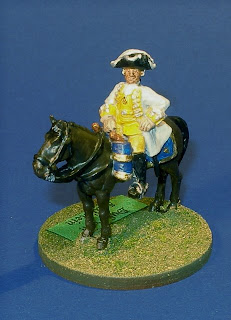 Answering the call from the Imperial Ministry of War for additional troops to reinforce the Reichsarmee in its impending campaign against the forces of the Elector, Duke Siegfried von Sachsen-Wachsenstein is assembling his kreis contributory regiment, to be composed of equal portions of the Musketeer Regiment von Schlichting and the Fusilier Regiment von Pflugk, with accompanying artillery.

As I stated in an earlier post, I'm using the very nice Eureka SYW Saxon infantry and artillery for this force. These figures are sculpted very well and dressed in battle rig, with just a canteen, cartridge box, and sword. They have been a pleasure to paint as the uniform details are raised just enough to make them distinguishable.

The Duke, above, is the mounted officer figure in the range.


The Musketeer Regiment von Schlichting has been completed and is currently engaged in training. 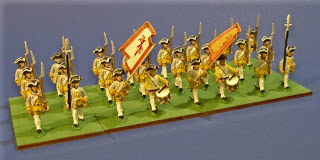 Still being outfitted are the remainder of the contributory regiment:

Postscript: I have a new, darker blue background. Does this make the pictures better and easier to see? Your comments are welcome!
Posted by ColCampbell50 at 2:14 PM 8 comments:

This post is a test to determine if I can use my photo editing software to make my pictures not so dark looking. Of course, it may just be my computer at work that isn't balanced enough, but we'll see. You've seen these units before in previous posts. 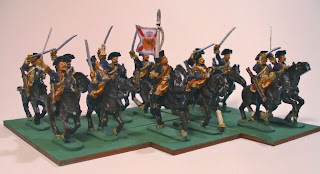 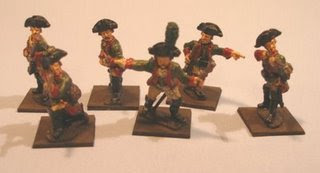 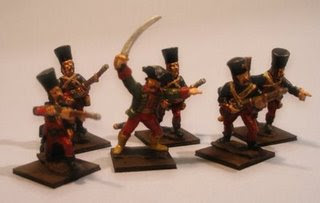 So, can you see the pictures any clearer than in previous posts? Are they not quite so dark? Please tell me what you think. Thanks, Jim
Posted by ColCampbell50 at 4:12 PM 4 comments:

Additions to Carpania and Courland

Toward the end of September, I made several small additions to the forces of the Margraviate of Carpania and the Duchy of Courland in preparation for the Big Battalions game at MilleniumCon next month. 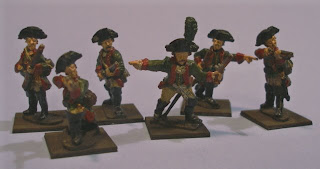 For the Carpanian jagers, I added a battalion commander and battalion sergeant, both Front Rank figures. The officer, Major von Staffeldunkel, is center front. He is actually a dismounted Brunswick dragoon officer from Front Rank's AWI line. The sergeant is just off the officer's pointing finger and is a Prussian jager from Front Rank's SYW line. Neither one looks much out of place with the Old Glory Prussian jagers who make up the rest of the unit. 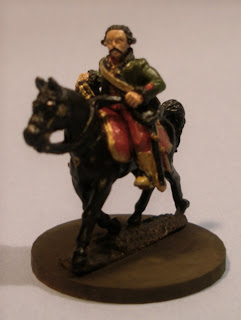 To command the light forces of the Duchy of Courland, I've added a mounted officer from Front Rank's Austrian SYW line. Dressed as a hussar and carrying his busby in the crook of his right arm, this figure gives every impression of being a resolute commander of light troops. I've named him Colonel Ignace Alleshazy, a Hungarian in the employ of the Duchy of Courland. He will command the Tamnii Narod Pandur battalion and the Timofievich Cossack pulk for the Duchy. 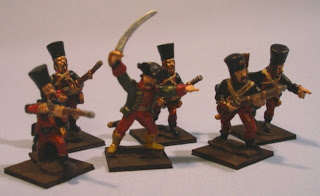 And for the Tamnii Narod Pandurs, each of the three companies has added a company officer and senior sergeant, also Front Rank figures. The officer is waving his sword and the sergeant is to his left (your right). As with the Carpanian jagers leaders, these figures seem to blend well with the Old Glory SYW Austrian figures I'm using for the pandurs. The only glitch is that the sergeants hat is shaped differently and has a cast-on emblem. But I rationalize the discrepancy with the fact that he is a senior NCO.

As the previous post shows, I am now working on my Eureka Saxon figures, which are very nicely cast and a joy to paint.
Posted by ColCampbell50 at 7:41 PM 4 comments:

I have had some of Eureka's Seven Years War Saxon infantry figures ever since they first were released to 100 Club members. These figures are very well sculpted and have good proportions.

With word from the organizers of the MilleniumCon "Big Battalions" game that the Imperial troop strength was lagging significantly behind that of the Elector, I moved my Saxons up in my painting queue. And I'm glad that I did, because they are very easy to paint. There is sufficient detail cast onto the figures but it is not so exaggerated that it appears grotesque. The infantry are minimally equipped, with just a cartridge box, water bottle, and sword/bayonet scabbard.

The mounted officer will be turned into the ruler of my Saxon imagi-nation, Duke Siegfried von Sachsen-Wachsenstein, who is a Feld-Marshal Leutnant in the service of the Empress. 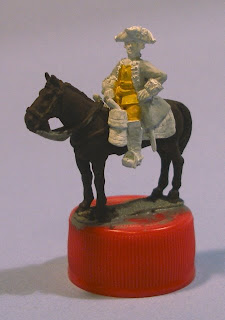 Here he is as a work-in-progress. He wears a light gray coat (his duchy's uniforms are a hold-over from the Saxon uniform colors of the War of the Austrian Succession), with yellow facings. His saddlecloth will eventually be bright blue with plenty of gold details.

Also pictured in-progress is the Musketeer Battalion Kreis von Schlichting in their light gray coats with dark yellow britches, yellow smallclothes, and yellow facings. I mount the figures on flat headed roofing nails using Elmer's white glue. This gives me a very flexible holder and the figures pop off the nails with minimal effort once they are completely painted and varnished.

Here are 12 of the Fusilier Battalion Kreis von Pflugk mounted on their painting nails but without any priming yet. They will also have light gray coats but with bright blue facings.

More pictures to come as their painting progresses.
Posted by ColCampbell50 at 7:11 PM 2 comments: