It has been over a week since the Colonial Barracks convention in New Orleans, so I suppose I should post my pictures from the convention.  Not all the games were photographed as I was involved in playing or running games from Friday evening through Saturday evening.

So here they are, grouped by the game:

The Battle of Jalapa - 1846 -- a fictitious action based on a "what if" Santa Ana had not taken his army north to its destruction in the Buena Vista campaign, but kept them to face General Winfield Scott's army advancing from Veracruz.  My friend, Electric Ed, ran this game using Larry Brom's The Sound of the Guns rules and his own 15mm American and Mexican armies.

The Defense of Beaune-La-Rolande, 28 Nov 1870.  A small force of Prussians defends this French village needed by the French Army of the Loire on its advance to Paris.  Can the Prussians hold out until their reinforcements can "march to the sound of the guns?"  I ran this game using Larry Brom's Chassepot and Needlegun rules and figures from Doc Ord's, Lord Sterling's, and my Franco-German War armies.

At this time my rechargeable batteries finally gave up the ghost.  Not having any replacements, I was unable to finish photographing my game.  However John from the Nomadic Old School Gamer blog did get a bunch of pictures.  During the lunch break, I ran out and bought some regular batteries for my camera so I could get additional pictures.

The Great European War of 1892.  Paul Arceneaux ran this battle using his vintage 54mm figures, some of which were, as Paul said, "old enough to be your grandfather."


The Hive and the Flame demonstration.  Rules developer Terry Sofian flew down from St. Louis with his rules, some British forces, and his bugs.  Combining elements of The Sword and the Flame and 800 Fighting Englishmen, The Hive and the Flame pits the British Empire at the end of the 19th Century against its most formidable enemies - alien arthropods controlled by "the Hive."  I commanded a "brigade" of the bugs in this battle.

American Civil War Skirmish.  My friend, Lord Sterling, unveiled a new rule set, The Sword and Secession, a variant of The Sword and the Flame, at this convention.  His game pitted small sized Union and Confederate units in the wilds of somewhere in the South.

Along the Sweetwater Canal, Egypt, 1882.  Using Larry Brom's old 30mm Anglo-Indian and Egyptian army, Lord Sterling ran a mega-game of the Anglo-Indian attack against Colonel Arabi's Egyptian army in 1882.  This was the piece-de-resistance game of the convention.  We had six Egyptian commanders and five British commanders, each with a brigade of infantry or cavalry.  I was so busy as the Anglo-Indian commander that this is the only picture I took.  John's Nomadic Old School Gamer blog (link above) has more pictures.

After the Gaming Was Over.  We all sat around and told stories of old gamers, conventions long ago, and games in which we had played.  It was a grand old time.

And finally, the grand old man himself, with whose rules we have all had such fun in gaming over the decades:

Larry Brom (Sergeant, USMC, Korean War veteran)
Author of The Sword and the Flame and all the other rules we have enjoyed

Larry's sweatshirt reads:
To err is human
To forgive divine
Neither is
Marine Corps policy
Posted by ColCampbell50 at 8:44 PM 1 comment:

Finally, after what seemed to be weeks of on and off painting, I completed the 1st Brandenburg Dragooner Regiment Nr. 2 for my 1870s Prussian forces.  This regiment will be part of the multi-owner German and French forces that will slug it out in the battle of Beaune-La-Rolande on Saturday morning at the Colonial Barracks convention in New Orleans. 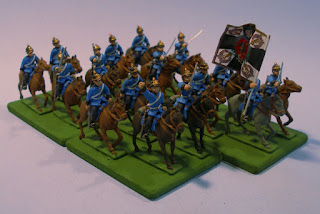 Composed of sixteen Castaway Arts Prussian dragoons, the 1st Brandenburg Dragoons were part of the 6th Infantry Division during the invasion of France in 1870.
Posted by ColCampbell50 at 11:09 AM No comments: