We have just learned that my friend and comrade-in-arms Larry Brom, Sergeant, USMC, has died of a heart attack after a long illness.  Larry is the author of The Sword and the Flame colonial rules and many other rules that have provided many, many fun games for all of us over the years.  He is survived by two daughters, Lori and Christy. 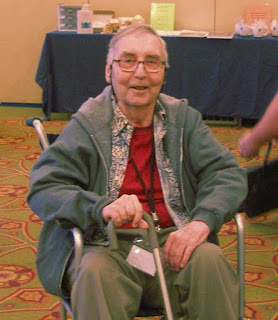 I first met Larry when he was living here in Jackson in the 1970s and developing his TSATF rules.  I enjoyed a couple of games at his house while I was home on leave from the Army.  Larry and I always joked about the merits of our respective services and I had the utmost respect for his service with the Marines in the Korean War where he was awarded a Purple Heart.

Larry wrote that his father took him to see the premier showing of "Gunga Din" in Chicago in 1939 and he became enthralled with it.  It influenced the development of his wargaming rules.  So this is for you, Larry:

’E carried me away
To where a dooli lay,
An’ a bullet come an’ drilled the beggar clean.
’E put me safe inside,
An’ just before ’e died,
'I ’ope you liked your drink,’ sez Gunga Din.
So I’ll meet ’im later on
At the place where ’e is gone—
Where it’s always double drill and no canteen.
’E’ll be squattin’ on the coals
Givin’ drink to poor damned souls,
An’ I’ll get a swig in hell from Gunga Din!
Yes, Din! Din! Din!
You Lazarushian-leather Gunga Din!
Though I’ve belted you and flayed you,
By the livin’ Gawd that made you,
You’re a better man than I am, Gunga Din!

Good job, bugler!  We will miss you.