My last group of figures that I painted in June have finally had their portraits made.  All of these figures were purchased from Ken H. at Bayou Wars.  They are all Foundry figures from their Darkest Africa line. 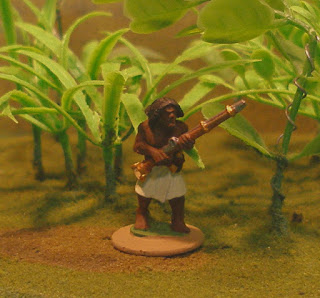 The first up is a single formerly Baluchi mercenary who is joining my gang of Ruga-Ruga toughs.  He will free up an more conventionally dressed askari to be a gun bearer for my white hunters.

The last are a group of not-so-heavily-armed Zanazabari slavers.  These seven chaps are armed with muskets instead of the Martinis and Remingtons with which their comrades are armed.  These figures will probably end up being used as guards while the more heavily armed Zanzabaris go out after more captives.

Already primed are the last batch of figures I purchased from Ken -- a 17-figure unit of Baluchi mercenaries armed with matchlock muskets, swords, and shields.  While not having a lot of firepower, these fighters should be awesome in a melee.