Today our wargaming group gathered at Lord Sterling's house for another play test of his The Sword and Secession rules variant to The Sword and the Flame.  As the overall Confederate commander, I had to defend the Cedar Key salt works against a group of Union raiders from some of the East Gulf blockading squadron.


Although the Union forces gained control of the salt works, they didn't have enough time to destroy the large wrought iron evaporation vats before the second half of the Confederate reinforcements arrived and drove them away.

Soon a battle report will be posted on the Jackson Gamers new web site -- link.

Lord Sterling will be running this game at the Colonial Barracks convention, the first weekend in November.  This rule variant will eventually be published by Sergeants3, probably sometime in 2013.
Posted by ColCampbell50 at 5:17 PM 1 comment:

I've added to my artillery complements for the French and Prussian forces that I have for the 1870-1871 Franco-German (AKA Franco-Prussian) War.  They consist of two batteries of French light artillery and one battery of Prussian heavy artillery.

This artillery will be used in a Franco-German War game I will be running at the Colonial Barracks convention the first weekend in November down in New Orleans.
Posted by ColCampbell50 at 7:45 PM No comments:

The Jackson Gamers gathered at Jay's house today, Labor Day, to test a new variant of The Sword and the Flame rules.  This Civil War variant is called The Sword and Secession. 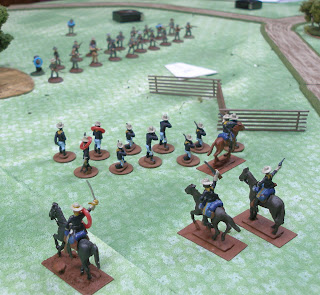