Hunters and a Mighty Gorilla

I have painted up some recent purchases.  They will eventually be used in a safari game later this year.

First we have some white hunters with their faithful gun bearer.  These figures are from Brigade Games and were developed to complement Howard Whitehouse's The Lion Eats Tonight rules.

Purchased from my friend Ken H. at Bayou Wars earlier this month, these two "famous" characters will join my Darkest Africa forces.  They are both Foundry figures from packs DA1 (Explorers) and DA14 (European Ladies).  Also pictured is one of Foundry's "special" animals from pack GPR024.

And finally, another "Knight of the Crescent Moon" joins the Justice Union League.  Detective Inspector Achmed was also purchased from Ken H.  He is another Foundry figure, from pack DA234 (Belgian Officers and NCOs).

In Part 3 of my Bayou Wars report, I will post some pictures taken during the game in which I was Assistant Game Master.  This game originated in a program that was presented very early in the year at the Mississippi Department of Archives and History about the finding of the "lost mines" where the Mayans got the jade that they used in their various religious and statuary products.  About the same time the Bayou Wars Board of Directors decided that they would go with a Mayan related theme since the world is supposed to end this year with the end of the Mayan calendar.

I suggested the idea to my good friend Bill H. and together we ran with it, building a "Mayan" temple, some other ruins, and additional jungle terrain.  We both supplied about half the troops for the game.  We used the Two Fat Lardies I Ain't Been Shot, Mum! rules, suitably modified for 28mm figures and simplified for convention use.

The actual discovery of the source of Mayan jade happened in the fourth quarter of the 20th Century.  So we decided to move it "back in time" to the 1930s and have a German expedition attempt to "locate" the lost Mayan jade mines.  Opposing them would be American and British forces.  In this scenario, some local Central American banditos had kidnapped an archaeological team that had located the jade source.  They were to sell them to the German Nazis (Zeppelintruppen and Marinentruppen) and their local hired mercenaries.  The American Marines and Rocketeers, aided by part of the garrison from British Honduras, were to rescue the team and thwart the nefarious scheme of the Nazis.

Later on, I'll post some pictures of our building of the temple and the various ruins, the finished products you can see in the following pictures.


I Ain't Been Shot, Mum uses a technique called "blinds" to generate some uncertainty into where the various players' troops are located.  Bill used flock covered CDs with labels and, where appropriate, national flags as his blinds, as can be seen the following pictures.


When the gaming time block ended, it was very apparent that the Germans would not be able to break through the British and American forces and make it back to their Zeppelin.  It appeared that everyone had fun.  We had an unusual mix of players in this game -- Doc Ord and his wife Martha (opposing each other with British and German troops), our fellow gamer "Electric" Ed, two father and son pairs, and another teenager.
Posted by ColCampbell50 at 8:06 PM 1 comment:

The game I ran at Bayou Wars was held on Saturday morning as the Annual George Carr, Sr. Colonial Game.  This action pitted US Marines and a British flying column protecting American missionaries against a local Chinese warlord in the "Back of Beyond" China sometime between the wars.  I used The Sword to Adventure variant to Larry Brom's inimitable The Sword and the Flame rules with a few modifications to convention action.


A MISSION TOO FAR?

While American Marines man the perimeter of an American mission station to repel the Chinese warlord's troops, Number 30 British Flying Column must race to their assistance.  Will the British get there in time or will it be "A Mission Too Far?"

Although the British flying column moved as quickly as it could, they just couldn't get to the mission quickly enough to prevent it from being overrun.  Like their compatriots in 1944, it was "a mission too far!"

HMAC Ajax and the Crossley lorries are Matchbox Models of Yestreyear vehicles.  The troops are a mixture of many different manufacturers from old "true" 25mm MiniFigs to new 28mm Copplestone and Brigade Games, all owned and painted by ColCampbell.  But once on the table, all melded together almost seamlessly.  The roads and streams were made by the incomparable, late Andrew Doyle.  The rest of the terrain (except the "cornfield") was built and/or painted by ColCampbell, hisself.

Posted by ColCampbell50 at 4:53 PM No comments:

Labels: Back of Beyond, Bayou Wars 2012, Colonial gaming

It has been two weeks since Bayou Wars, the HMGS Gulf-South regional convention (link) in Kenner, Louisiana ( a suburb of New Orleans).  But those two weeks have seen me go through first a viral sinus infection and then a bacteriological sinus infection.  I've finally felt energized enough to post the pictures I took.  Herewith are general pictures I took of various games being run at the convention, in no particular order.

That is just a sample of all the action that was going during six 4-hour gaming periods over three days.  Plus there were several tournaments and a bunch of dealers.  This is an excellent regional convention that is easily accessible for gamers from Texas to Tennessee to Florida.  Hope to see you next year!

Parts 2 and 3 will cover the games in which I directly participated as either a gamemaster or a supporting producer.

Posted by ColCampbell50 at 4:30 PM No comments:

Where There Is Smoke ...

There is fire and police.

After completing preparations for my Bayou Wars game earlier this month, I took a short break in painting, partly because I have had both viral and then bacteriological sinus infections.  But as I am finally recovering from them, I completed some fire and smoke markers and a few British early 20th Century police.

The fire and smoke markers are made by Litko Game Accessories and I have had them for a number of years.  I finally decided to glue them together and then to steel washers to make them easier to store and use.


The sets come with small flame markers in two colors and tall and short smoke columns.  I mixed the flames and smoke pieces together to get ten small and ten tall markers.  I then glued them to steel washers (3/4" or 20mm) and painted the washers a charcoal color.  I'll primarily use these with my 1:2400 pre-dreadnought ships and my plastic Renaissance galleys. 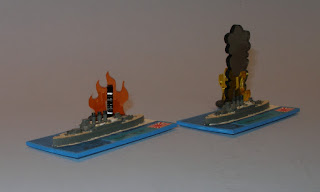 
I also painted some heavier armed police for my British police flying squad.  I'll use these in pulp fiction games and as my contribution to our WW2 home army games using I Ain't Been Shot, Mum rules. 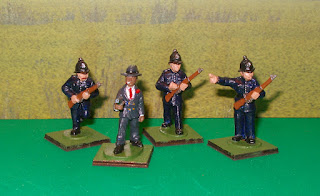 The detective inspector (in mufti) is an old out-of-production Ral Partha police detective while the three rifle armed constables are from the Artisan Design Thrilling Tales line.  The detective inspector was originally painted as a gangster in a very bright blue suit (a la Dick Tracy style).  But I repainted him in a more neutral charcoal suit although he still wears a red carnation boutonniere.  They will join four other bobbies that I painted back in December. 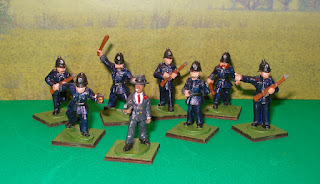 The British police flying squad can quickly respond to any crisis and swiftly put the Hun infiltrators in their place!

Posted by ColCampbell50 at 5:24 PM No comments:

Over the past several years, the Mississippi Department of Archives and History (where I work) has been engaged in a project to restore our state's Confederate flags that have survived.  On Monday, the Museum Division opened a small exhibit in the lobby of the William F. Winter Archives Building showing six of the restored flags.  The building lobby is open from 8:00 am to 5:00 pm on Monday through Friday and from 8:00 am to 1:00 pm on  Saturday.  If you are close to Jackson, please stop by a see these restored flags.  The exhibit will be in place through the end of November.  More details about the department, including a map of the Winter Building's location can be found here:  www.mdah.state.ms.us

The pictures I took show the information plaque that depicts the flag prior to restoration, a close-up of the wording, and then a picture of the restored flag.  One picture in the portion about the 22nd Mississippi's flag describes how some of the restoration was done.  Two of the flags were captured in battle and later returned to the state.  There are detail pictures showing the capture information added by the captors.  Finally there is a picture and description of the rare twenty-star United States flag that we need to restore once funds can be accumulated.  The flags are framed behind glass so I had to use some unusual angles to cut down on the reflections, when I could.  I hope you enjoy this exhibit.  And please stop by and see them in person -- they are magnificently restored! 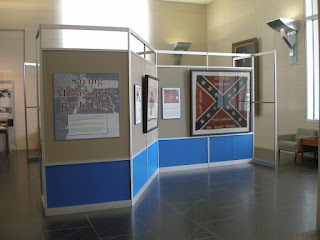 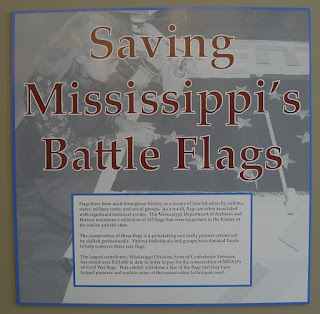 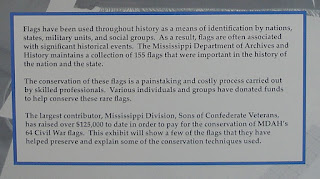 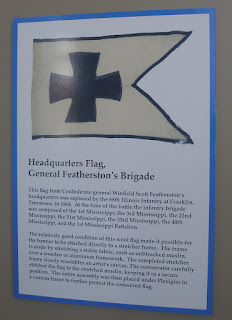 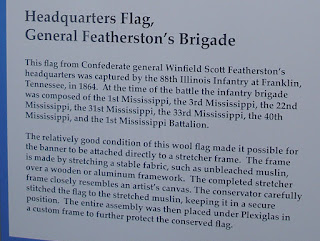 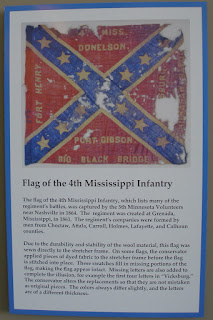 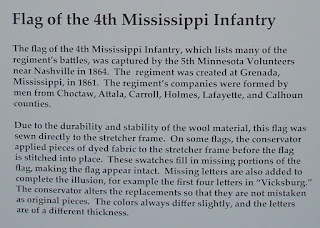 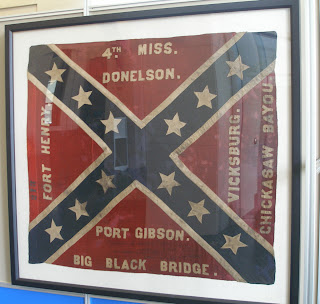 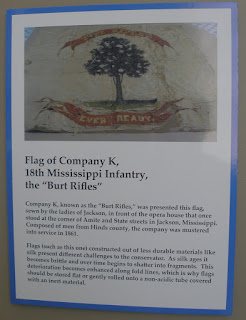 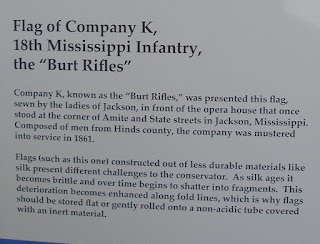 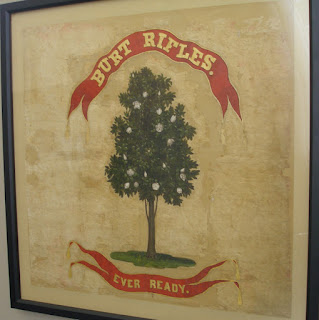 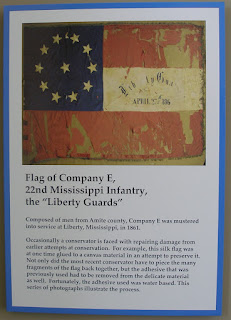 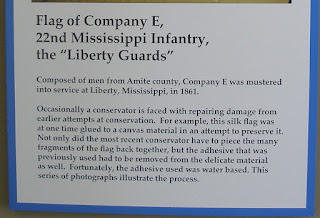 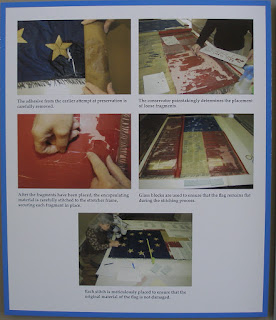 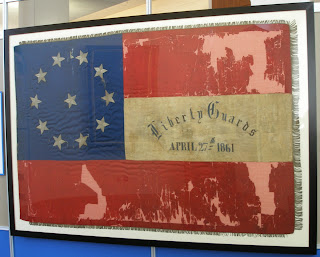 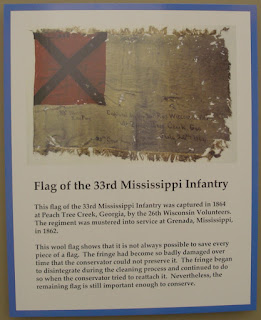 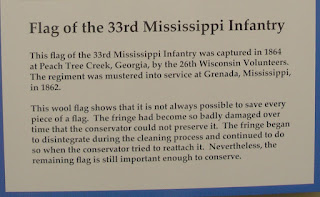 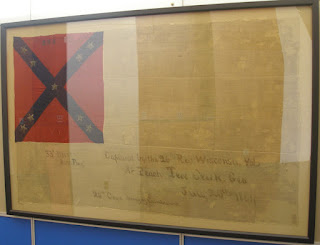 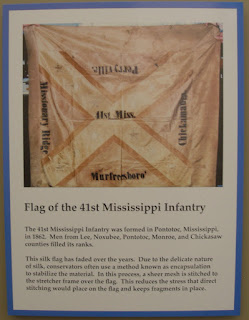 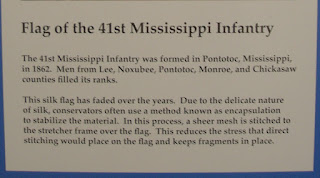 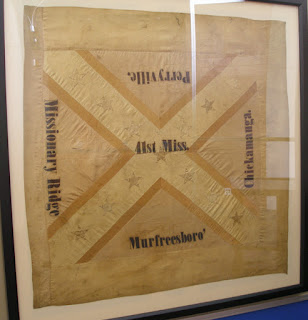 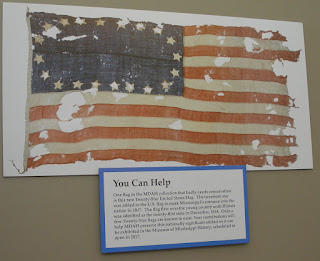 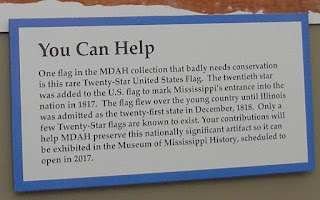 Contributions to help restore this rare flag can be mailed to:

And please designate that the contribution is for the Twenty-Star Flag.