No More an Unknown Soldier

Some months ago, I purchased a batch of Franco-Prussian War figures that included 24 painted Prussian infantry mounted four to a stand.  I had never seen this type of sculpt but I figured that they were an older sculpting just from the more slender appearance.

Unfortunately the bases were too big for the rule set I use, Chassepot and Needlegun.  So I was forced to soak and separate the figures from the bases, which went without any problems.  Once the figures were cleaned of glue and flocking, I searched for any markings.

Here is a picture of one of the infantrymen showing the round base.  There were no markings on bottom of the base but there was something engraved on the top. 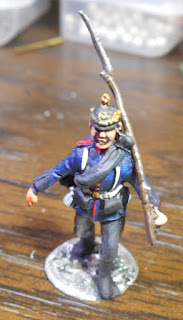 As I looked at all of the bases, there were several where the base color had remained in the etching. 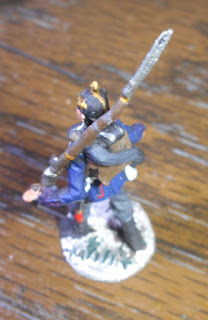 And lo, almost like the "One Ring," I could discern the word "Willie."  These were vintage Willie figures!!

So now I have a battalion of Willie German infantry.  With a little judicious repainting, mainly the cuffs, they have become the 2nd Battalion, 1st Hessian Infantry Regiment, Lieb Garde, of the 49th Infantry Brigade, 25th Ducal Hessian Infantry Division, IX Corps.  Their compatriot 1st Battalion is composed of vintage 1" Scruby figures.  And being the Lieb Garde, it is only fitting that both battalions be composed of such vintage figures.
Posted by ColCampbell50 at 3:20 PM 1 comment:

Gotha Raid on a Bridge

Lats Thursday several of the retired Jackson Gamers gathered for our weekly lunch and game.  This time we again flew the "unfriendly" skies of war-torn Europe using my Wings of War/Wings of Glory airplanes.  The scenario originally was for two German Gotha bombers to raid targets behind the allied lines with six allied two-seaters operating in defense.  But I only had enough maneuver cards for three allied planes so I reduced the bomber strength to one.

The bomber (flown by me) had a choice of two targets.  I chose the bridge which was only "protected" by one allied fighter.  It was an interesting mission as I overflew my turn-in point for the bomb run and had to make a different approach.  I think that mistake sealed my doom as you'll see below.

We had a plethora of engine's smoking and catching fire on both sides as well as many machine guns jamming.


Having missed my turn-in point was my downfall.  That extra set of maneuvering I had to do was what sealed my doom.  But it was a fun and exciting game especially as machine guns jammed just at the worst (or best for the traget's point of view) times.  At one time I had both my forward and aft guns jammed for a series of three maneuver cards.

Posted by ColCampbell50 at 9:36 AM No comments:

My command, on the right flank, consisted of six ashigaru units, five with melee weapons and one with bows.  We used a highly modified samurai warfare version of the venerable "Rules by Ral."

Here are a few pictures I took using the camera on my phone.  They are not the best since I have an inexpensive phone (not really needing anything better).  I had forgotten to bring my regular camera.

While I was involved attacking on the right flank, my two compatriots launched their attacks on the center and left.  The center force consisted of two mounted and three foot samurai units and aimed for the main gate.  The left flank force had the same composition as mine.  Both ran into ambushes but successfully fought them off.  Their attacks finally went in and destroyed almost all the pirates causing the game to be called.

We had a good game, especially using Russ' exquisite figures and his wonderful terrain.  Russ is a retired college art professor and has a deft hand with a paint brush.  We always enjoy his games.
Posted by ColCampbell50 at 9:48 PM No comments:

As I stated in my August American Revolution painting post, I only had two more units to paint in this current batch of figures.  They were the Loyalist 3rd Battalion, New Jersey Volunteers and the American 6th Virginia State Line Regiment.  The latter is a speculative unit designation.

As usual, please click on the pictures to get a larger image.

And I thought that I would again show the method that I use to identify each unit.  I developed a Word table form that has one row of cells containing just the unit identification that is just tall enough to cover the back of each stand and then a row of cells that is almost as wide as the stand and contains the unit designation, the manufacturer of the figures, and the month and year in which they were painted.

The labels are arranged in thin and then thick rows.  After printing, I cut them apart, remembering not to separate the two parts of the label.  I score the dividing line and fold the label, then glue it to the base with standard PVA  (Elmer's) glue.

Next up in October are more "companies" for the Gallian (French) Royale Ecossais Regiment and, hopefully, two small Carpanian (Prussian) battalions for my Imagi-Nations armies.
Posted by ColCampbell50 at 6:57 PM 1 comment: