I've finally finished the watchtower and the artillery emplacements for my Relief of Wadi Zoum-Zoum game at the Bayou Wars convention on Saturday, June 12 in New Orleans. 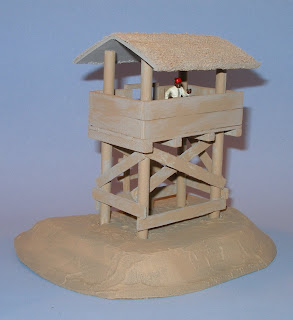 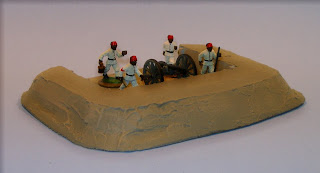 One of the three artillery emplacements (from the front).

And from the rear showing the wood revetments inside the emplacement.
All the figures are 25mm Ral Partha Egyptians and the gun is a 25mm Ral Partha Krupp in Egyptian service.
With the exception of repairing and repainting one of the river bank sections, I am finally finished with my game preparations!  Whew!!
Posted by ColCampbell50 at 4:30 PM 1 comment:

My gaming buddy, Jay Stribling, and I went down to Columbia, Miss. yesterday to visit our gaming friend Mark Stevens at his new house, complete with his own dedicated game room.  It was nice, with a 12' x 6' table and plenty of room to maneuver around it.

Mark had a Sikh Wars game set up so we could play test the Black Powder rules.  An army of British and Honourable East India Company troops (6 or 7 infantry and 2 cavalry brigades) assaulted a ridge line of three redoubts held by the Sikh Army, which had about 5 or 6 infantry and 2 cavalry brigades.  Mark and I commanded the Anglo-Indians and Jay commanded the Sikhs.

As usual, click on the pictures for a larger version. 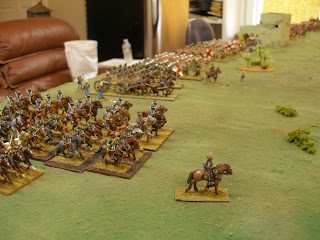 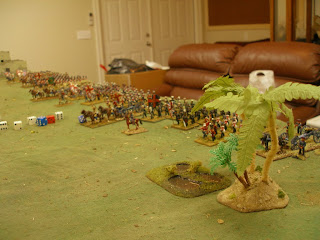 The Anglo-Indian left flank commanded by yours truely, Col Campbell.
Although Mark had a copy of the rules and had read through them several times, none of us were familiar with them so we blundered through the first several turns.  By the third turn, we were becoming comfortable with them but we were sure that we missed things - such as being able to roll saving throws for melee casualties as well as fire casualties.  Anyway, on with the story. 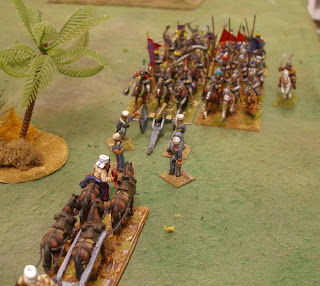 While the Anglo-Indians slogged towards the ridge (although some brigades moved rather fast), Jay's left wing Sikh cavalry attacked one of Mark's guns.

And here is where we encountered a portion of the rules with which we were not comfortable.  The artillery units, according to the rules are very fragile.  At first (before we read more) we were loosing artillery units on both sides at an alarming rate.  Then we realized that the gunners could ignore the first morale failure.  But that still meant that the second failure saw the gunners fleeing for their lives.  Later, Jay discovered that the morale table for gunners might have an error in it which would have benefited the gunners tremendously.  Further reading of the rules will also probably change our opinion of this characteristic.

Here is my left flank infantry brigade and supporting artillery advancing steadily.  The allied cavalry is moving up behind them to counter the Sikh right flank cavalry.  The next turn the Sikh cavalry would move towards the center and my cavalry would follow them.
The armies were Mark's magnificently painted troops of MiniFig, Foundry, and others.  On the battlefield (and in separate units) the differences of the figures disappeared.  By the way, the British gun and crew in the above picture are actually Perry Carlist Wars figures of the British Auxiliary Legion (BAL).  They were "drafted" for this game.  Mark also "drafted" 1870s/1880s British limbers and crews (in khaki) for the game. 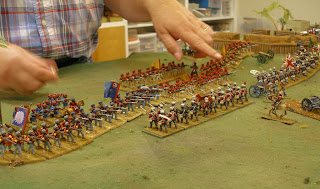 As my center brigades ascend the slope, Jay moves his Sikh troops forward and we begin to exchange fire.  The center Sikh redoubt is in the background. 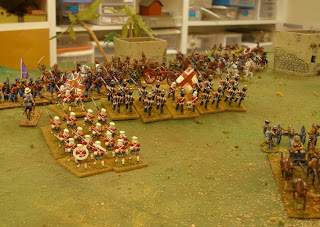 On the other side of that center redoubt, another of my brigades encounters Sikh infantry.  But this time they are backed up by a Sikh cavalry brigade, who ..... 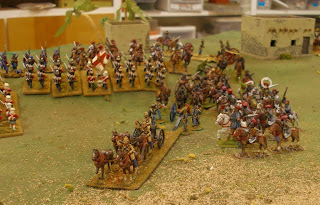 ... in a swirl of dust come galloping around the flank of the infantry and try to overpower the supporting artillery.  Although I didn't get a picture of it, part of my allied cavalry brigade came to the rescue and forced the Sikhs to retire. 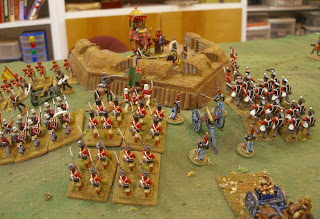 Meanwhile, two Indian infantry battalions assault the center redoubt, occupied by an 18lbr and the Rajah of Ranjipur, the Sikh commander, gaily mounted on his elephant. 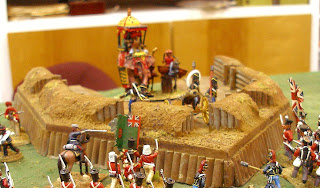 A closer, though slightly out of focus, picture of the Rajah.  The two Indian battalions clambered over the revetments, drove away the gunners, and occupied the redoubt. 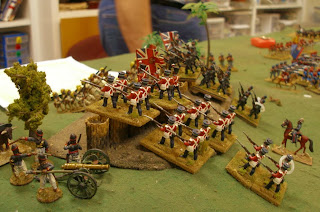 On the left flank, two Indian battalions assault the far right Sikh redoubt but were flung back in disarray since it was garrisoned by two guns and a battalion of infantry.  Here is where knowing we could roll saving throws for melee casualties might have helped the Indians.  Oh well, such are the fortunes of war. 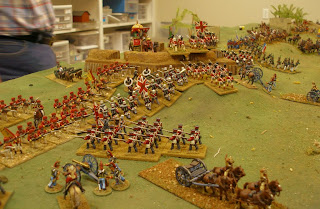 The fighting continues in the center over the redoubt in the background and for the ridge to its right (the viewers left).  The white rings denote casualties in units which weren't removed until the entire unit broke and fled. 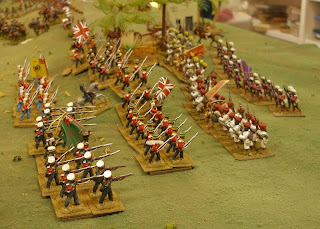 Meanwhile Mark was not lazing around.  His infantry and cavalry were in close combat with Jay's left flank commands, including this stalwart line of irregular Sikh infantry. 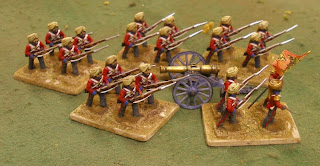 Finally, as darkness began to fall, the Anglo-Indians had only taken the center redoubt while the Sikhs had kept control of both flanking redoubts.  Both sides had been bled white.  The Sikhs even took a British gun!
As I said earlier, there were points we missed in the rules, but we will be giving them another try later this summer.
Posted by ColCampbell50 at 5:15 PM 3 comments:

More Zariba and a Dry Streambed

In the post before last, I described making the first of the zariba pieces (link) for my June convention game, The Relief of Wadi Zoum-Zoum.  But I wasn't satisfied with the way they developed even after I sprayed them with a watery white glue.  The vegetation was just too dried out to stand any type of gaming handling.  So I went to the local Hobby Town and bought a large bag of "spring" lichen.  The resultant zariba pieces were more durable and even, to my eye, looked better.

Here are four 2" sections, two on either side of one of the artillery
emplacements and manned by some of my Ral Partha Egyptians.
I also needed a short section of dry streambed to connect the oasis to the rest of Wadi Zoum-Zoum.  Taking a piece of Masonite, I sprayed both sides with camouflage sand paint and then glued on more sand, added fine gravel for the backs, and glued in larger gravel and small rocks to finish it off.  I painted Future floor wax on the streambed to give it a wet appearance but that is not readily apparent in this picture.

The dry streambed is 12" long.  The white splotches are glue that hasn't dried yet.
I'll be posting some pictures of the second play test of the game later and you can see these pieces in situ, so to speak.
Posted by ColCampbell50 at 1:07 PM 2 comments:

A Figurehead and Some Guns

This posting is a brief departure from my little world of wargaming.  The other day was nice and sunny here in Mississippi so on my lunch hour I drove over to the grounds of our state capitol and took these pictures. 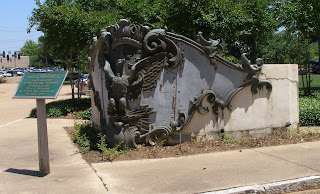 The figurehead of the Battleship USS Mississippi (BB-23).
As one of the last of the American pre-deadnoughts, she was laid down in 1904, commissioned in 1908, and decommissioned in 1914.  She was turned over to Greece and, as the Kilkis, was sunk by Luftwaffe Stuka bombers in 1941. 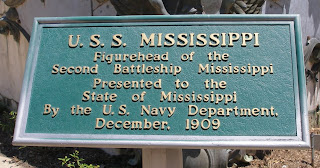 Here is a photograph of her in 1908.  If you look closely, you can see the figurehead on her bow. 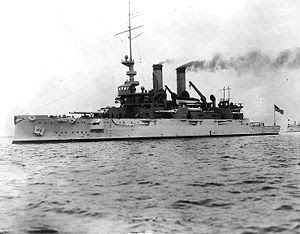 Also on the grounds of the state capitol are two WW1 German guns.  They are both Krupps and, I believe, 152mm.  I was going to look in our records (I work in the state archives) but forgot.  I'll update this post Monday with their details.  These guns were part of Mississippi's share of German military trophies from WW1.  Some of the trophies are still in existence but many were turned over during the WW2 scrap metal drives and saw new life as parts of American military equipment used to defeat the Axis forces.  Kinda ironic, ain't it! 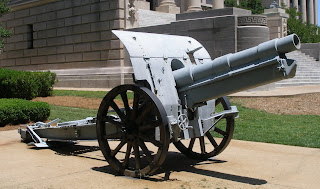 This shows the right side of one of the two guns.  The wooden wheels were completely refabricated by our state National Guard maintenance shops several years ago.  They also cleaned the guns, repaired any rust damage, and repainted them.  I was involved in the discussions over the paint scheme. 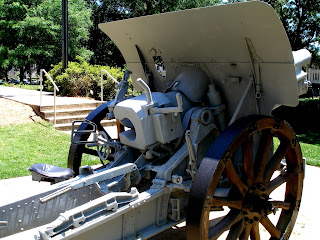 This is the rear of the gun showing some of the various levers and mechanisms.
(Can you tell that I'm not an artilleryman or an ordnance expert!) 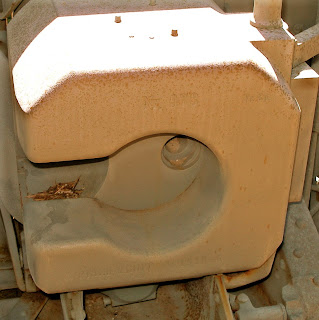 The breech of one of the guns.  They are both engraved/stamped with the serial number of the breech and the legend Fried. Krupp  1916.
There  was a third gun, a 105mm if I remember correctly, that was outside of the War Memorial building.  The National Guard retained that gun for the Mississippi Military Museum in Camp Shelby.  One of these days I'll get down there to tour it.
Later I'll post some pictures of the decorations of our War Memorial building.  I hope you enjoyed this brief excursion.
Posted by ColCampbell50 at 10:57 AM 3 comments: