Last Thursday, our "Old Guys" group gathered to play our first game using my Command & Colors - Medieval game.  But instead of the tan and purple blocks and the laboriously applied labels, we used my 15mm figures, some of which I described in previous posts.
Unfortunately I did not take any pictures until about the 6th turn.  Please click on the images for a large picture.  The pictures were taken with my Motorola phone camera.
The Byzantines slowly moved forward on their right until they got within bow range and started a desultory ranged fire on the Sassanids.  They moved their medium bow-armed cavalry unit onto the hill and, with the two bow-armed light infantry units, returned the fire.  Casualties were minor here.

The Sassanids won decisively 6 banners to 2 for the Byzantines.
My 15mm figures are a mix of various manufacturers, primarily vintage Miniature Figurines and Table Tops Games figures.  The hills were hand cut from 1/2" extruded insulation foam upon which I glued  an enlarged image of one of the C&C-M hills.  The mat is from Cigar Box.
This coming Thursday we'll fight the next scenario, the follow-up battle of Melebasa (528 AD).
Posted by ColCampbell50 at 10:48 AM No comments:

I've added two more cavalry units to the expanded rebasing of my 15mm Medieval figures.  These two will give me enough units to fight the first Byzantive vs Sassanid scenario of "Commands and Colors - Medieval" -- Thannuris, 528 AD.
The first unit is Hun light bow cavalry (to give it the C&C-M designation) for the Byzantines.  The figures are vintage Miniature Figurines.  Two of the mounted archers were previously painted while the other three mounted archers and the three with light spears are newly painted. 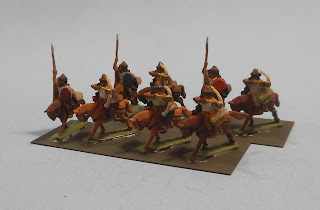 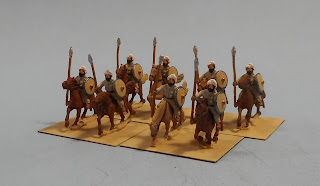 I've got two more cavalry units in the pipeline, another unit of Hun light bow cavalry for the Byzantines that will complete the second scenario's order of battle (Melebasa, 528 AD) and a unit of LBC for the Byzantines to get a start on completing the third scenario's OB (Dara, 530 AD).  I will definitely get the Huns painted before the end of the year!
Posted by ColCampbell50 at 10:25 AM No comments:

Merry Christmas to All

Hoping everyone is having a merry Christmas and will have a blessed new year!
After this year of trials and tribulations, next year just has to be better!
Posted by ColCampbell50 at 9:43 AM 4 comments:

Over the past several weeks I've painted some more 15mm Medieval troops to be used when our gaming group starts using the new (to us) "Commands and Colors - Medieval" gaming system with miniatures instead of the blocks.  In my last post on this subject, I described how I was rebasing already painted figures.  This post shows the first batch of newly painted figures.
Please click on each image for a larger picture.


And that's the first part of the painting to have figures ready for the Battle of Thannuris (528 AD) scenario.  I still have a unit of Byzantine Hun light bow cavalry (using MiniFig Huns) and a unit of Sassanid light cavalry (using Essex Arab Conquest light cavalry).  I'll be starting them today.
Posted by ColCampbell50 at 11:31 AM No comments:

For our 'Old Guys" Thursday get together last week, I brought over my Wings of War/Wings of Glory WW1 biplanes for some fun dogfighting.  We divided into Allied and Central Powers sides and each of the four players chose two planes, without any consideration of whether they would actually have been in the air at the same time.  I acted as umpire until one of the Central Powers players had to leave to attend to a business conference on Zoom (bah!!!).

We used my new Cigar Box aerial battle mat which, to my eye, looked really good.

After a couple of turns maneuvering for advantage, the action began:

After this, Jay's D-VII, which was badly damaged fled the scene of the action with Russ' Nieuport in pursuit, followed by both of the Dr-1s.  But none of the planes could close into firing range so we ended the game.
Results:
Russ lost one Nieuport 28 and didn't manage to shoot down any German plane.
Steve lost both of his Camels but did manage to shoot down the Albatros.
Ed's Dr-1 shot down a Camel as did his Albatros (under my command) but the Albatros was lost.
Jay, while not shooting down anyone, also didn't have either of his planes shot down.
But the main thing was that we all had a blast!!
Posted by ColCampbell50 at 4:08 PM No comments:

While I was working on my 15mm Medieval rebasing project (see previous post), I was also painting a batch  of Bob Murch's "Pulp Figures" sculpts.  I anticipate using them next year in some pulp games, probably using the "Rugged Adventure" rules.  Please click on the image for a larger picture.

Next were four of the five figures from pack PHP-18, Rugged Sons of the Empire:
Then three of the ladies from pack PHP-19, Dangerous Dames 2:
And finally, some assorted figures:
Hopefully you'll be seeing them and others in various adventures next year after our gaming group can really get back together.
Y'all stay safe!

Many years ago, I rebased my 15mm Medieval troops from their old DBA-style basing to the basing used by the "Vis Bellica" rules since I was starting to use that set.  That basing called for all units to be on 80mm x 40mm bases (for 15mm figures).  We used the rules for a year or so, but the mathematical calculations necessary to compute combat (both ranged and close) taxed our wee minds too much.

I've used this basing standard with the "To the Strongest!" rules with good success.  Then our group started playing games using Ricard Borg's "Commands and Colors" mechanisms.  We quickly transitioned from the board game with the blocks to a larger hex gridded battle mat using our metal figures.  We've played ancients in 15mm, Napoleonic in 25mm, and Samurai in 28mm.  Although the card driven mechanism can result in some very unrealistic (in my mind) situations, the games were enjoyable.

Now Borg has released "Commands and Colors - Medieval" which I will be getting for Christmas.  The box has already been received and is sitting in the closet with other presents awaiting the big day.  Now I could have kept this basing standard and just used strength markers but that seemed a little awkward to me.  So I began what I had though about doing for years --  the major project of rebasing my Medievals back to the DBA standard of 40mm wide bases.  Each unit will be of 4 stands so losses can be shown.  So far I've rebased about 50% of my forces - the Byzantines and almost all of the Moslems.  Then I ran out of bases, but new ones are on the way.  Here's what they look like now:

I have a large number of figures to paint still in order to have enough for the various scenarios in the "Command and Colors" rule set.  My challenge of course has been that "C&C-M" is set in the very early Medieval period with scenarios dating from the 500s and 600s and pitting the late Romans and early Byzantines against such enemies as the Huns, Sassanid Persians, and Ostro- & Visigoths.  Many of my figures are from the 900-1100 timeframe but will work.  I'm hoping that, as with the ancient sets, Borg expands to cover other Medieval periods.  Then I can use my Normans and other western European troops.
I also obtained two Cigar Box battle mats with 4" hexes to use for my gaming.
But part of the project also involves what to do with the old 80mm x 40mm bases that I no longer need.
After some consideration, I decided to scrape as much of the adhesive off the bases and use them as infantry unit movement stands.

But the old bases would not hold the 30mm deep cavalry stands so I had to come up with something else.  Luckily I had some old skirmish movement bases made from matt board and magnetic sheeting.  I just cut them down and, voila, cavalry movement bases!

Now it is on to paint more figures and make more cavalry movement bases!  More later as the project progresses.
Posted by ColCampbell50 at 11:02 AM No comments: