It seems like I didn't do much painting in March, but when I add it all together, I did 2 mounted officers, 16 cossacks, and 6 mounted knights, for a total of 24 mounted figures or 48 points. 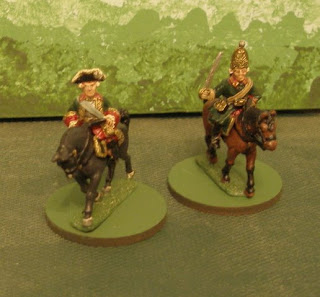 Above are Yakov Alexandrovich Pavlov, the Duke of Courland, and his son, Colonel Pavlov. These are both Front Rank figures from their Russian SYW line.

Above are 16 cossacks of the Timofievich Pulk (regiment) of the army of the Duchy of Courland. I bought these from a gaming friend named Tim Broome (hence the name). I'm not sure what manufacturer these are, but at least two of them were two piece rider castings. They will provide a light cavalry screening and raiding force for the Duchy in its wars against the Markgraviate of Carpania. 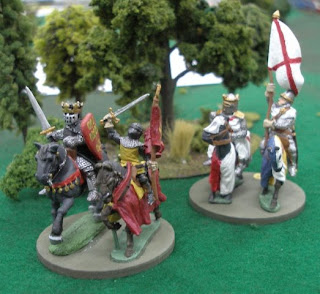 Finally to get ready for a medieval game on March 29, I painted six mounted knights. Three of them are shown above (along with the High King from last month). The other three were figures to fill-in existing units. In the above picture, the High King (John de Bullion, who always wears black) and his banner bearer are on the left and William Worthington, Duke of Bentwood, and his banner bearer are on the right.

The Courland officers and the knights are mounted on Litko bases while the cossacks are on home-cut masonite (hard-board) bases.

Next month should see some more imagi-nation cavalry (especially a unit of Spenser-Smith figures), so stay tuned.