Finally after almost a month I am posting a few of the pictures I took at our regional convention, Bayou Wars, which took place June 7-9 in Kenner, Louisiana (a suburb of New Orleans).  This was the 21st running of Bayou Wars and was, as usual, a lot of fun.  The pictures are not necessarily in chronological order but I have attempted to identify the game and when in the convention it was played.

And last but definitely not least, board member Chris Johnson presents the 2013 Bayou Wars Best Game Master of the year award to Larry Brom for all his involvement in the convention over the years and for all of the rule sets he has written  and inspired.  Accepting for Larry is his daughter Lori. 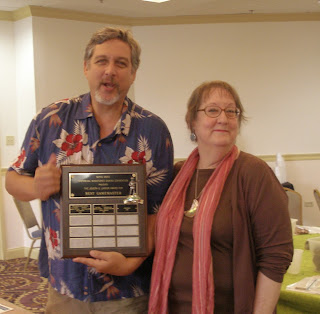