Finally this past weekend I completed my Regiment Tirailleurs Algerien (or Turcos) for my 1870-1871 Republican French army.  The Turcos were North African native troops (primarily Algerian) recruited into the French Army of Africa during the middle part of the 19th century.  They were very tough fighters.

There were three regiments in the Imperial French Army during the early part of the war but most of them were killed or captured at either Sedan or Metz.  During the Republican phase a 'regiment de marche' of Turcos was established from the various depot companies and survivors of the earlier fighting.  This regiment is what I'm representing.  The figures are Askari Miniatures from Al's 'French Army of Africa' line.  They are very well sculpted figures and were fairly easy to paint.  They are based for Larry Brom's "Chassepot and Needlegun" Franco-German War rules.

They joined their previously painted 1st and 2nd Battalions to form the complete regiment.

The regiment forms the 1st Brigade, 1st Division, 15th Corps, Army of the Loire (my Republican French corps) along with the Regiment Legion Entrangere (French Foreign legion) and a composite chasseur battalion.

As a note, the French African forces also included Tirailleurs Senegalais but they weren't involved in the Franco-German War, staying in west Africa.


I took this picture while driving back from Kroger in Byram (and yes, I stopped in a parking lot first).  When I showed these mare's wings (as this type of cloud formation is called) to my wife, she said they looked like angels' wings, which I guess in appropriate for a Sunday during the times in which we are now living. 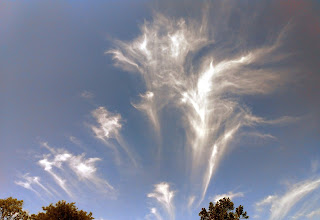 I hope that everyone is staying safe!


Some time ago, I purchased a sample pack of Baccus 6mm Franco-German War figures when I bought the "Bloody Big Battles" rules.  I painted up the infantry and artillery but not the cavalry.  Finally during this "stay at home" period, I completed the cavalry.

The painting job is very basic which is about as good as I can get with 6mm figures at my age.  So here they are.  They are temporarily based on thin cardboard (pasteboard) stands and are without flags for the infantry.  Please click on the pictures for a larger image.

I was (and still am) hoping to put together forces for the Franco-German War but will have to wait until Baccus resumes taking orders.  I may also expand into other 19th Century periods, but will have to wait and see on that.  I'm also waiting on Litko to reopen so I can order bases from them.  Ah, the times in which we're currently living.


Last night I completed all of the lattices for the five boxes in which I will be storing almost all of my WW1 biplanes.  If you'll recall, I reported on the start of this project several days ago.

Here are the five boxes: 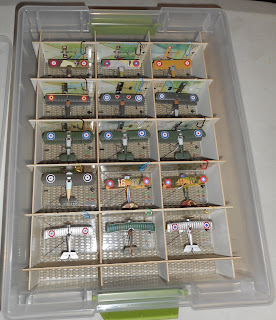 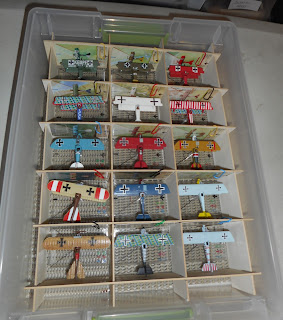 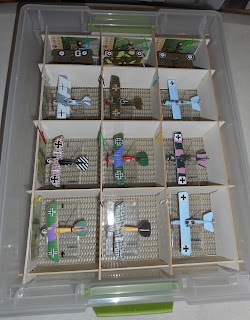 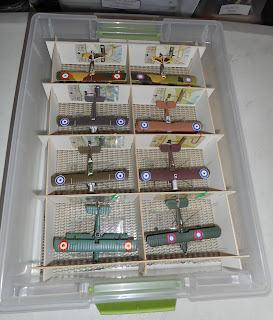 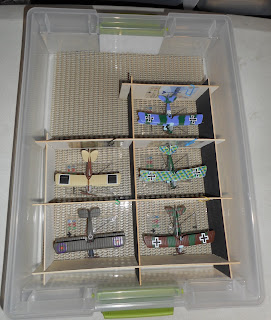 The planes that are not in these boxes are my four heavy bombers (two Gothas and two Capronis, still in their original boxes) and the four single-seat fighters (two Allied and two German) in the Revised Deluxe Set box, as well as my Snoopy in his trusted Camel doghouse, although he will probably ed up in Box 5.

These will fit in two one-cubic foot cardboard storage boxes with room left over for a box holding the control panels and rule books.

Now all I have to do is get busy printing and folding the maneuver deck and damage deck boxes.