Please see ColCampbell's Shipyard for the progress of the 18th century row-galley.
Posted by ColCampbell50 at 9:56 AM 1 comment:

The battle report for the second Capitania General de Florida game is on the Jackson Gamers blog (see "Favorite Links" (below left). 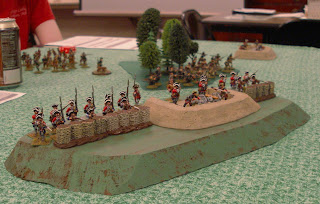 The main defensive redoubt in the Britannian lines.
Posted by ColCampbell50 at 12:32 PM No comments:

In addition to the Compagnies Galliens (previous post), I also completed five Britannian Royal Artillery figures.  These were among a group of Dayton Painting Consortium RSM-95 figures I bought on eBay several years ago. 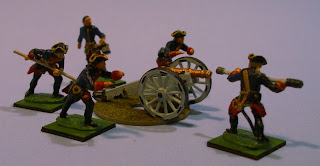 I added a RAFM ramrod to the figure on the right and a piece of wire to the figure on the left as a gun spike.  The figure on the front left had a full coat so I painted him as an officer.  Three of the other figures were also wearing coats, but with turnbacks, so they became regular gunners.  The fifth figure (left background) is just in his sleeved vest and without his hat.
The  gun is a RAFM 6-lbr, I believe.  It also came as part of the eBay lot.
Coupled with three seconded Britannian infantry, they manned two 6-lbr guns helping to defend the Britannian colony from the attacking Asturians (Spanish) and Gallians (French) in my latest Capitania General de Florida game.
So for the month of July, I painted and based 6 Woodland Indians, 5 Britannian artillerymen, and 33 Compagnies Galliens, as well as 1 Japanese 1:2400 scale "pre-dreadnought" armored cruiser.  In addition, I constructed 10 sections of temporary breastworks (which were about as involved as painting a figure!).  This my "Olley" point total for July was a respectable 44 points of figures, 1 ship, and 10 terrain pieces, as well as planning and running two Capitania General de Florida games.   Whew!!
Posted by ColCampbell50 at 4:39 PM 3 comments:

I finally finished my two companies of Compagnies Gallien just in time for my second Capitania General de Florida game on July 31.  Each company has an officer, a sergeant, and 14 soldiers.  Here's what they look like: 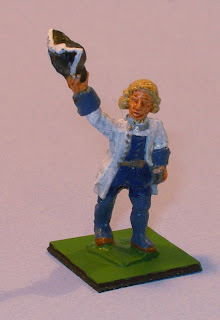 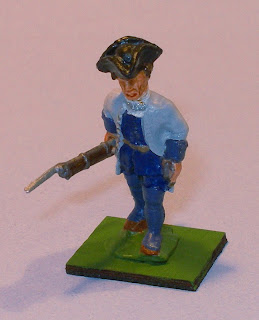 Both company commanders are also "Spanish" officers with an added musket.

The first company with the battalion commander.

The second company.  The red dots denote the officer and sergeant figures for use in The Sword in the Forest rules variant of The Sword and the Flame rules that I used.
This Old Glory pack had 30 figures, luckily evenly divided between those with and those without packs.  There were six different poses, also evenly divided 3 and 3.  The pictures below show the front and rear of a figure from each of the poses. 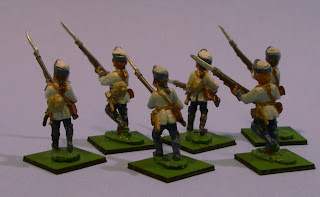 Rear view, showing the packs on the three figures to the left and in the background while the figures to the right and in the foreground do not have packs.
These Old Glory figures were fairly easy to paint since they didn't have a lot of belting, turnbacks, lace, etc.  All 30 figures are armed with muskets with fixed bayonets and also have tomahawks on their waist belt.
Posted by ColCampbell50 at 4:23 PM No comments: