"You seem to happily mix troops from different manufacturers without problem. What's your opinion on this?"

And it struck me that I do tend to mix troops from different manufacturers in my various armies. So I decided to pontificate on this for a bit.

My current 25/28mm imagi-nation Seven Years War armies are composed of Old Glory, Sash & Saber, Front Rank, Foundry, Eureka, Miniature Figurines, RAFM, and London Warroom figures. With very few exceptions, the manufacturers' figures are not mixed within individual units, but are mixed within various commands. With the exception of the MiniFig and RAFM figures, all of them are, in my eyes, comparable in height if not in heft. I acquired them by various methods, primarily via eBay and direct purchases. I like all the manufacturers figures, not having any real favorites.

My 25mm Napoleonic armies are just as eclectic, with Miniature Figurines, Scruby, and Hinton Hunt/Der Kriegspieler figures being in the majority, with smaller contingents from Hinchliffe and Warrior. Many of these have been acquired over the years going back to the early 1970s. Again I rarely mix manufacturers' figures within a unit.

My 25mm medieval armies are just as mixed, with even older out-of-production lines represented. And my Victorian Colonial armies are primarily Ral Partha but with a good leavening of MiniFigs, Scruby, Askari, London Warroom, and Falcon.

But once they are deployed on the tabletop and the battle begins, the differences seem to fade into the background and all you see are your courageous troops engaging the enemy. As you can see, I am not a "size" purist although I think I do draw the line at say putting the newer "heroic" 28mm lines in with my older "true 25mm" Napoleonics, so you won't see Redoubt or Calpe (great figures though they both are) in with them, just as I don't have any Ral Partha Renaissance in with my primarily Foundry Renaissance armies, the Rals are just too small for my eyes.

Well, I hope I haven't bored you with my ramblings, but the question did make me ponder my past troop acquisition decisions and contemplate my future ones.

Good gaming to all!!

This month has seen the Margraviate of Carpania add to its little army. First up is that very capable Scottish mercenary commander, Major General Seamus Campbell. 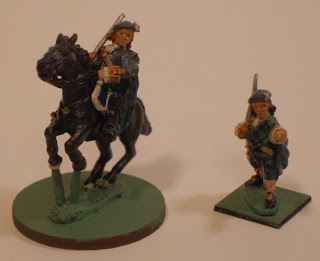 He and his dismounted alter ego are both Front Rank figures from their Jacobite line. They are painted in a stylized blue and green Campbell tartan. Seamus will eventually lead Campbell's Mercenary Legion in the service of the Markgraf of Carpania. 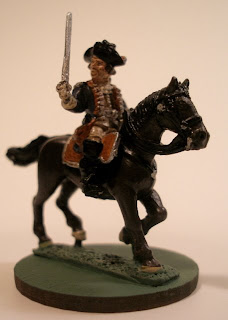 Von Valkenhayn is a Front Rank Prussian dragoon officer and cuts a dashing figure in his regimentals that are patterned after the Prussian 10th Dragoon Regiment.

Joining Von Valkenhayn and the Leib Squadron is the 2nd Squadron of the Hapnich Dragoons. 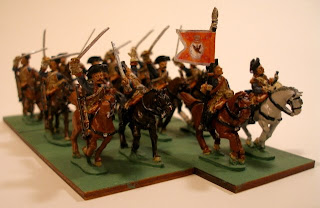 And finally, we have the converged Teutonica/Paulaner Grenadier Battalion, composed of the grenadiers from the Teutonica Musketeer Battalion and the Paulaner Fusilier Battalion. 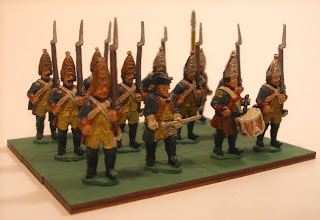 These fine examples of the elite grenadiers of the Carpanian army are Crusader figures and feature an officer and five grenadiers from the Teutonica musketeers and a sergeant, drummer, and four grenadiers from the Paulaner Fusiliers. They will be brigaded with the converged Grenadier Battalion Zweibieren/von Stuppe as the army reserve.

Next month I will be painting the 3rd Squadron of the Hapnich Dragoons, Campbell's Highland battalion (in all their kilted glory), and a second company for the Staffeldunkel Jagers, plus limbers for the Carpanian and Courland position artillery.

I hope you enjoyed these additions to my imagi-nation forces.
Posted by ColCampbell50 at 7:06 PM 8 comments:

A new cavalry squadron has joined the army of the Duchy of Courland. Obtained from that doyen of the Lace Wars, Ioannis Mavromichalis, this squadron of Foundry figures was painted per Ioannis' directions (as the honorary inhaber) in red coats with black facings. 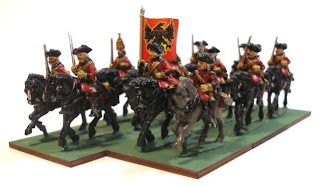 They join the Constantine Horse (Spenser Smith figures mainly from Peter Constantine) as the main cavalry arm of the duchy. They will also make the big march from Mississippi to Texas in November for the "Big Battalions" game at MilleniumCon in Round Rock, just north of Austin.

I had one extra dragoon figure so I painted and mounted him as an aide-de-camp to Duke Pavlov, the ruler of the duchy and commander of the army. 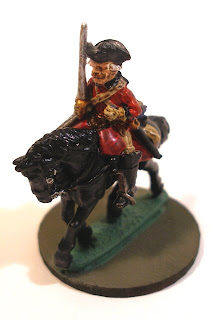 These Foundry figures were very easy to paint and I wish I could afford more of them, but ....
Posted by ColCampbell50 at 3:12 PM 6 comments:

Finally - a Figure for Fiona

Earlier in the summer, a number of us dispatched small units or individual figures to Der Alte Fritz to partake in his Jacobite rebellion campaign games. As part of the back story for the Battle of Carmudgeon, I developed a character named "Frivolous" Fiona McGillicuddy. And several days ago, I completed painting a figure for Fiona using one of the free Old Glory Army pirate ladies. 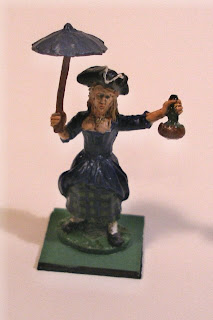 She is holding a parasol to shed the copious amounts of rain that fall on the Britannian Isles and, for comfort on those rainy days, a bottle of single-malt Scotch whiskey from the private preserves of Clan Campbell's cellars.

many of you may be familiar with the family name of McGillicuddy. In later years, one of Fiona's descendants earned fame and fortune in New York married to that famous Cuban band master Ricky Ricardo. Yes, I speak of the red head herself - Lucy McGillicuddy Ricardo!
Posted by ColCampbell50 at 3:04 PM 5 comments: