My final figure painted in February is the leader of the Red Hawk Clan, Sheikh Abdallah.  This mighty warrior is also a Falcon Miniatures figure, but this time mounted on a Falcon horse. 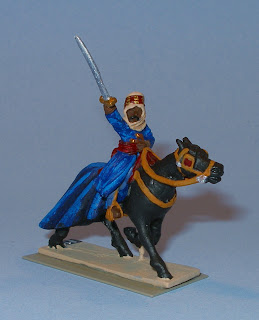 I tried a new technique with this figure, using a three layer paint scheme on the horse's caprison and a two layer scheme on Abdallah's robe and headdress.  To my eye, it turned out much better than I thought it would.  I probably won't use it for "ordinary soldiers" but will probably use it again for senior officers.  It makes them stand out a little better from the rank and file. The base will get a terrain treatment similar to the camelry unit's bases (see previous post) once I get the second cavalry unit painted and mounted.
Posted by ColCampbell50 at 9:32 PM No comments:

So far February has not been as productive as January for painting.  I've only done a 12-figure camelry unit and a 12-figure cavalry unit for my convention game play tests that start in April, with the convention in June.  Both of these units are Falcon Miniatures (www.falconminiatures.com/), but with the cavalry mounted on Miniature Figurine horses (which is the way I bought them on eBay).  These two mounted units along with two infantry units (of which only one is painted) will comprise one of the four native commands in my convention game. 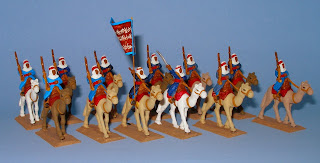 These 12 stalwarts are all armed with rifles and ready to smite the infidels.
Cavalry Unit, Red Hawk Clan

Armed with a mix of rifles and swords/pistols, these desert raiders can ride rings around the slow moving Egyptians.  You'll notice that there is one dissimilar figure in the right rear.  Since I only had 11 mounted figures, he was "drafted" to fill-in as the "12th man."
The painted infantry unit of the Red Hawk clan was included in my Colonial game at last year's convention.  You can see it here:  Red Hawk Clan Infantry
And a few words about the convention game:  This game will pit a heterogeneous force of Mahdist, Beja, and desert Arabs led by the Agandar of Karres, one of the successors to the late Mahdi and the late Khalifa.  They will be besieging the Eyptian supply base at Wadi Zoum-Zoum on the Green Nile.  Coming to the base's rescue will be a British river column including Royal Navy landing party troops, Royal Marine Light Infantry, and gunboats.  The game will be presented at the HMGS Gulf-South Bayou Wars 2010 convention in New Orleans on June12.  Convention Link.
Well, back to the painting desk for another Arab cavalry unit and two more Arab infantry units.

After getting a snowfall back in December (see Snow! in Mississippi?!?), most of us thought that would be all for this winter.  But then we had over 72 hours of below freezing temperatures in January that resulted in ruptured water mains all over the city (Jackson, state capitol), little to no water pressure, and a "boil water" alert.  That shut all the schools, city and state government offices, and many businesses for 3 to 4 days!  And now, another snowfall.

It has not been as traumatic as the huge snowfalls over the mid-Atlantic states. But for the Deep South, it is a very unusual occurrence to have two snowfalls in one winter season.

And in a late entry, I heard on the CBS evening news that 49 of the 50 states in the USA had measureable snow on the ground today, all but Hawaii whose volcanoes on the Big Island had no snow.  Wow! 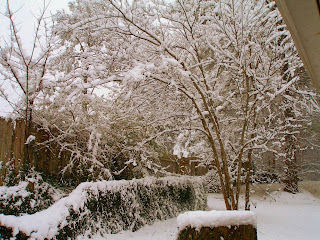 Part of my backyard on Friday morning.
The snow started falling very late Thursday night and continued until early afternoon, Friday (today).  Many schools announced closings Thursday night and the rest of them in central, south, and south-west Mississippi were added early this morning, as were the state  government offices.  So I had a SNOW DAY!! 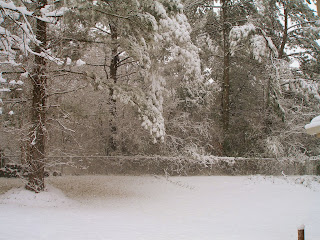 The woods behind my house, looking pretty with the snow on all the branches.  But just at the right edge you can see a big pine branch over the back fence which dented the top rail.  That was the only damage my property received, thank goodness. 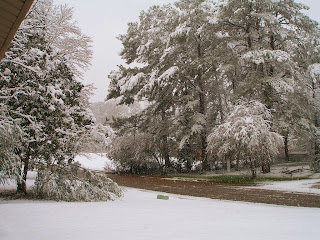 The trees across the street also looked pretty but in the lower right corner of this picture you can see another large pine branch which, I think, just missed the back porch roof of the currently vacant house across the street.
We only lost power for about an hour and a half this morning, but there are many across the state who are still without electricity. 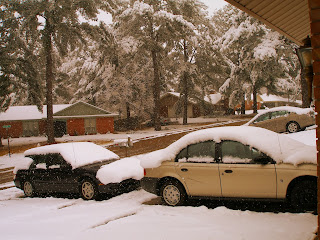 We got about 5" (125mm) of wet snow in the south part of the city where I live, as you can see from the accumulation on two of our cars.  There was some sticking on the streets in our neighborhood but as I didn't get out and drive around, I don't know how impeded the streets and highways were. 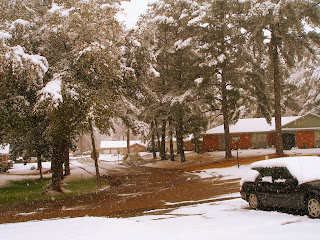 My other across the street neighbor also has a bunch of pine trees in her front yard and lost several limbs, including at least two large ones on her driveway.  And yes, the grass in the yard to the left is that green.  It is winter rye. 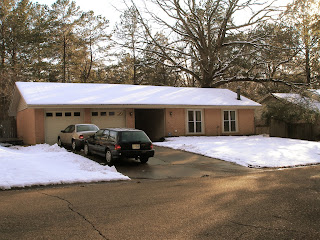 But by mid afternoon, the snow had stopped and the sun came out.  I "plowed" and cleared off the cars before I took this picture about 4:30 pm.  Unlike back in December, it will probably be a couple of days before all the snow is melted since the overnight temperatures for the next week will be below freezing.
All in all, for us it was a pretty event as neither my wife nor I had to get out to go to work and our power was only out for a short time.  We stayed warm and dry inside the house and will be having Rostbraten and spaetzle for supper tonight - a "German" meal for a cold, snowy day!  Schuss, y'all!
Posted by ColCampbell50 at 5:27 PM 3 comments: