Captain Quigley and Some Guns

Two posts ago I featured my Natal Native Horse with their squadron commander Captain Quigley.  I mentioned at the time that I was working on a dismounted figure for him and here it is:

While the horse is from Ral Partha, both human figures are from Miniature Figurines.  I've added a carbine under the dismounted figure's right arm by drilling a hole and slipping the weapon through, securing it with CA glue.  I still need to match the base terrain effects to the mounted figure and then improve both of them with some tufts.

At the same time I was completing some additional naval artillery and a small gun for my native forces.

And finally a small mountain howitzer that has somehow come into the hands of my native forces, in this case a Pathan gun crew although I have Dervish gunners as well.

This gun will give both my North Central Frontier Pathans and Green Nile Dervishes some artillery support.

These will be the last Colonial figures for a while as I need to get back to my 15mm American Civil War forces with a Confederate brigade next in the painting queue.

Posted by ColCampbell50 at 7:56 PM No comments:

While working out in my yard at several different times this past week, I saw these two backyard "predators." 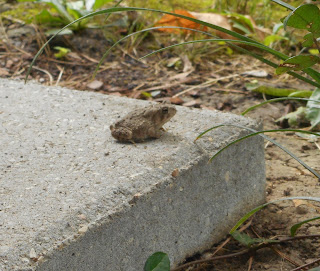 This very small toad-frog (that's what we call them down here in Dixie) waiting patiently for a several small bug or three.  It was only about 2" long. 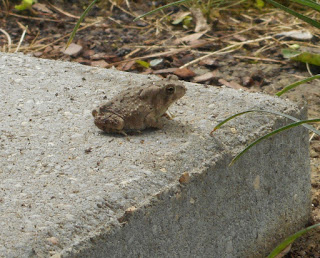 And then several days later as I was cutting my front yard and around the side of my garage, I came across this: 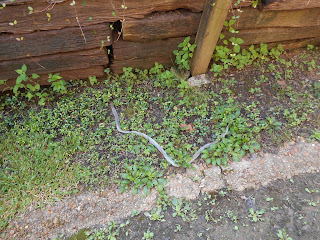 At first I thought it was alive but when the noise of my lawn mower didn't startle it, I looked closer and discovered that it was the shed skin of a non-venomous snake.  The skin was about 24" long and sort of fragile.  When I went to move it, it started to fall apart.  It brought back a recollection of another snake we had in our back yard, a king snake.  My wife decided that we should call it "Severus Snake" in honor of the recently released Harry Potter movies.

But these could be denizens of some forgotten world being explored by our plucky pulp heroes - a gaming scenario in the making.

During the Zulu War, the British raised a number of "colonial" units, primarily mounted, to augment the regular British Army forces deployed to the Natal region.  One of these was the Natal Native Horse.  Originally formed in 1866 and "regimented" in 1879, the Natal Native Horse was composed, in part, of amaNgwane (or Sikhali) tribesmen, Basuto tribesmen, and tribesmen from the Edendale Mission.  They were armed with Martini-Henry carbines and were used extensively for scouting and escort duties. The Edendale Horse were at Isandlwana where they covered the retreating British refugees as well as at Hlobane, Khambala, and the pre-Ulundi reconnaissance.  [Colonial Wars Sourcebook by Philip Haythornthwaite]

Here is my rendition of this unit.  The mounted troops have been painted for many years but the dismounted troops were just finished.  They are organized per "The Sword and the Flame" with 12 mounted and 9 dismounted figures per unit.

I have found a dismounted figure for Captain Quigley, which is currently in my active painting queue.

And traveling from southern Africa to the Northwest Frontier of India, I've added a 12-figure unit of mounted Pathan warriors.

All of these will see action over the coming months in some of our group's games.


Finally I've completed all of the units for the 4th Prussian Brigade, III Korps (August 1813) commanded by Generalleutnant von Bulow.  This "brigade" is actually a division sized unit as were all of the Prussian "brigades."  They did this to get around part of the onerous French terms after the 1807 capitulation of Prussia.

As you can see this is a formidable fighting force although light on artillery and cavalry, additional assets of which were provided by the corps.


The Pomeranian Light Cavalry Regiment was one of four national cavalry regiments formed in 1813 by the resurgent Prussian Army.  It was dressed in an uhlan style uniform with a dark green kollet and grey overalls.  The regiment was armed as a light cavalry regiment with sabers and carbines.  In 1815, this formation was divided between the Guard Dragoon and 4th Uhlan Regiments. [Information courtesy of David Nash's The Prussian Army: 1808-1815 (Almark Publications, 1972), my "bible for the Prussian Army.]

In addition to the 4th Brigade, my III Korps Prussian forces include the complete 3rd Brigade (three 3-battalion infantry regiments, one grenadier battalion, one hussar regiment, and one foot artillery company, plus four volunteer jager detachments), the still forming 5th Brigade (one 3-battalion infantry regiment and one hussar regiment) and 6th Brigade (one Landwehr cavalry regiment), almost all of the corps cavalry (three dragoon regiments, one hussar regiment, one uhlan regiment, and one Landwehr [of three] cavalry regiment), and most of the corps artillery (two 12-lb foot companies and one 6-lb horse company).  The Prussian III Korps was part of the Alllied Army of the North, commanded by Crown Prince Bernadotte of Sweden (a former Napoleonic French marshal).